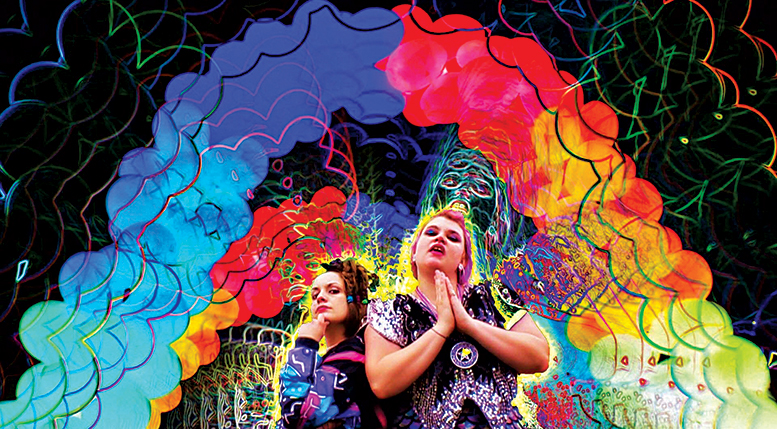 Citrusphere are fans of affirmation.

The Boston-based electro-pop band has a ritual of putting glittering gems on their fans (with consent) to help the audience “feel like they’re shining from the inside out.”

They are just one example of many of Boston’s thriving LGBTQ music scene.

“LGBTQ artist representation in the Boston music scene is evolving and I am happy to see the artists getting recognition,” said Angel Rose, a member of the band. “The dance floor has often been a place of liberation, celebration [and] refuge for the LGBTQ community and I want our shows to reflect and support that environment.”

“I think it’s awesome to look around and see how many queer performers … [and] queer performers of color are finding their spotlight here in Boston—not a city known for its inclusivity,” said Heather Mack, a member of Solo Sexx, a Boston-based LGBTQ hip-hop group.

“A lot of bands in the Boston scene work together to make a ‘queercore’ scene, with the caveat that not all of these bands identify their music with ‘queercore,’” said Pasha Koskins of Boston band Kármán Voh.

But, at the same time, some issues face the performers.

“Gentrification in the Boston area is causing so many LGBTQ musicians … to have to move away,” Mack said. “It’s really imperative that we continue to fight against policies and politicians that contribute to displacement so that all of us can benefit from [an] increasingly diverse lineup of local artists and continue to make our art there.”

“We need to be willing to teach and work with people and change the attitudes of our society.”

Boston Hassle (or, just “Hassle”), a local music promotion organization and venue, is headquartered in the Dorchester Art Project, an inconspicuous, slim, grey building sandwiched between apartments in the Fields Corner section of Dorchester, a neighborhood in southern Boston.

It started out as a group that mainly promoted all ages shows. But, according to founder—and co-head of the parent organization, Brain Arts—Sam Potrykus, “it quickly evolved into its commitment [of] serving underrepresented artists of all kinds—not just teens and youth, but especially women, queer and non-binary folks, people of color and anybody else who [felt] excluded.”

According to Potrykus, venues have a considerable influence in shaping an inclusive community and music scene. But there are considerable issues that come with that responsibility.

“Sadly, the only legal and legitimate venues who possess all the expensive [permits] and licenses are not often committed to diversity and inclusion,” he said. “There are spaces, usually underground, that are committed to such inclusion and safe space culture, but they struggle to stay open … because venues [aren’t] economically viable [in our society] unless they serve alcohol,” which is difficult under current Massachusetts state law.

But despite these issues, Potrykus remains optimistic.

“There is a lot of motion in the right direction,” he said. “People truly seem to care about inclusion and diversity … We need to be willing to teach and work with people and change the attitudes of our society.”

Allston Pudding, a Boston-based publication dedicated to local music, plays a major role in fueling the Boston LGBTQ music scene and helping foster a present and safe LGBTQ community in the city.

“We intentionally work to support and champion local artists (from our hometown to local scenes throughout the world), especially those who may not receive their proper radio play or publicity, but definitely deserve attention,” said Jackie Swisshelm, a writer for the publication. “For me, that means [femme, trans*, women], those LGBTQIA+ identified, artists of color and all their intersections.”

Along with this, according to Swisshelm, Allston Pudding also helps organize and support local events and causes, as well as donating to local organizations.

Supporting artists and the music scene “[is] a process that never has a stopping point because it’s always evolving,” Swisshelm said. “We need to constantly engage and educate ourselves so that we can fairly represent and include every aspect of the local music scene.

“At the same time, we need to hold up writers and artists who want to speak for themselves and give them a platform. That’s how we can discover our next favorites!”

Artists, venues, and publications help each other

“Local music” usually raises the question of what “local” means.

Local music, instead of being tied to location, seems to be constituted by the connections and associations of the bands and acts that make it up. In other words, local music seems to be more of a community than a location.

“A big thing I hold onto is the idea that we have to build each other up to build ourselves up,” said Mack, Solo Sexx. “That we are truly a community and that a [win] for one of us is a [win] for all of us.”

And it’s those connections that seem to reinforce the Boston LGBTQ music scene—a feeling of mutual protection, looking out for each other, and camaraderie that comes with the identity. With the emergence and departure of many bands and acts comes a sense of welcoming and a tight-knit spirit that ties Boston together in an essential and almost uniform, protective way.

“The best thing … is the inclusivity,” said Alec Goldman, a frequenter of the Boston music scene. “No kind person will be unwelcome [at] a show. If you’re nice and you want good music, then you’re [welcomed] with open arms.”

For many, local music is representative with the familial—a connectedness that is synonymous with home.

“Local music is like a beating heart of a community to me,” said Rose of Citrusphere. “From a personal perspective, local music communities have served as my chosen family, my source of freedom and as my catalysts for growth as a human being. I have felt most free as a queer individual within my local music community.”

Check out the bands, venue, and publication mentioned in the article, for more information.

[This story was initially published in the Oct. 4, 2018 issue of The Rainbow Times.]