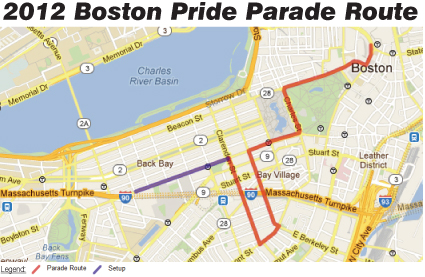 BOSTON, Mass. – Boston Pride has announced the official route for the annual Boston Pride Parade on June 9th.  This year, setup will be located on Boylston Street between Copley Square and Massachusetts Avenue and the parade will start in the area where Clarendon Street and Boylston Streets meet. The route of the parade takes its marchers from Boston’s Back Bay through the South End, up to the Boston Common, continues past the State House and will finish at City Hall Plaza where the festival will be held.

The Boston Pride Parade is a march to celebrate and promote equal rights for the region’s gay, lesbian, bisexual and transgender communities and is the staple event of Pride Week.  As one of the most popular and scenic gay pride marches in the country, organizations and individuals  from around New England will walk together to advocate for inclusivity, equality and respect.  The theme of the Boston Pride Parade this year is “Celebrating 30 Years of Worldwide Pride Movement” in honor of the annual InterPride conference, which will be held this year in Boston in October.

“We are very pleased with the official route of this year’s parade,” said Boston Pride president Linda DeMarco. “The route passes through neighborhoods that are supportive to our community as well as past the city’s most prominent historic sites. We look forward to marching with our friends, families, and neighbors and having a good time.”

The parade starts at 12 p.m.  Along the route, organizers recommend viewing the parade at Copley Square, in front of the Boston Center for the Arts on Tremont Street, on the Bridge over The Mass Turnpike on Berkeley Street, anywhere on Charles Street by the Boston Common and in front of the State House.

To view a map of the parade route click here

About Boston Pride Week – less than two months away

Boston Pride Week 2012 is less than two months away-June 1-10. This year, the theme is “Celebrating 30 Years of Worldwide Pride Movement” and what better way to celebrate worldwide inclusivity, equality and awareness than with special events, parties, and Boston’s biggest and most popular parade and festival.

Start the celebration on June 1st

• Block Parties and Much More!