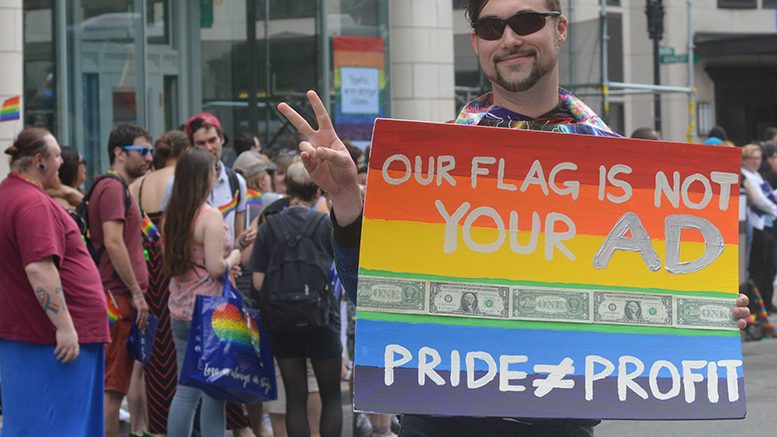 “Pride is about protest, celebration, and community and should be a welcoming, safe space for all,” read GLAD’s statement. “Boston deserves a Pride in which Black and POC LGBTQ+ community members have a strong voice in leadership and which works to address the issues causing harm to our community, including systemic racism and police violence.

“Guided by our organizational values of justice and lived equality; inclusion, equity, and mutual respect; collaboration; and anti-racism, GLAD will not be participating in official Boston Pride, BP, events in 2021. In solidarity with Trans Resistance MA and Pride 4 the People, GLAD supports the Trans Resistance March and Vigil for Black Trans Lives taking place on June 12.”

In June 2020, BP came under fire after an initial official statement about Black Lives Matter’s protesters and police brutality backfired.

Their actions involve a series of events including what has been explained as a “unilateral decision to remove any reference of Black Lives Matter” from an official “statement on police brutality after the murder of George Floyd, Breonna Taylor, and Tony McDade.” That alleged covert move lead to the resignation of 80 percent of Boston Pride’s volunteer workforce in June 2020, according to a former statement from Jo Triglio (they/them), former Boston Pride Communications team, and co-founder of Pride 4 The People (P4TP).

In July 2020, BP was contacted by Boston Pride 4 The People — founded by resigned committee chairs and volunteers of Boston Pride — and they demanded “BP’s board of directors step down citing a long history of allegations of racism and transphobia stemming from the board leadership,” according to a previous report by The Rainbow Times.

“[We] want to preserve Pride, but refocus back on the community,” said Triglio in 2020 — a resigned member who was also selected as the Boston Pride Grand Marshal in 2018. “We want to address issues that affect our community — racism, white privilege, transphobia, etc. The purpose of Pride 4 the People is to bring Pride back to the people.”

And others, too, denounced BP’s lack of support for Black Lives Matter.

“The community response was immediate and overwhelming,” said JP Delgado Galdamez, Communications Associate at The Network/La Red via a release sent to The Rainbow Times after the mass resignation took place. “Many of us know, from personal experiences, that Boston Pride wasn’t committed to supporting Black Lives Matter, and that was reinforced in the way the first statement was written. And I guess I was a little bit of a fool for believing that they would, by their own morals, support Black Lives Matter, as one of the members of their board is Deborah Drew, Secretary of the Massachusetts branch of the Log Cabin Republicans.”

In Dec. 2020, to clarify BP’s stance and get answers about what Boston Pride had “learned from the process” they claimed to have undergone without meeting with community members, The Rainbow Times sent Linda DeMarco, BP’s President, six direct questions (added for transparency purposes). DeMarco circumvented the questions and instead provided a nearly identical statement as the one found on their release, focusing on the evolution of the organization, an evolution they did not explain to The Rainbow Times when given the platform to do so.

“Boston Pride is continuing the ongoing transformation process and the Letter to Our Community issued last week speaks for itself, as does the information put on the website to address the issues facing our organization and our community,” read ‘DeMarco’s’ only reply to the questions asked. “As we said, we’ve heard the concerns of our community, who were disappointed by the Boston Pride Board’s actions this summer, and we’ve been working hard over the last several months to address those concerns in a comprehensive manner.

“Transformation is a process and Boston Pride will continue to evolve as our community evolves. We are creating a process that is interactive, representative of our community, transparent, impactful, and sustainable. We need broader representation throughout our community, and we are prioritizing the representation of Queer, Transgender/Gender non-binary, Black, Latinx, Indigenous and other people of color on our board, on our committees and at our events.”

In Feb. 2021, The Network La Red and The Boston Sisters Of Perpetual Indulgence also joined the boycott of Boston Pride via a statement. Watch the video of the Sisters here.

“The Boston Pride Board’s actions are abusive towards our community and just like most abusers, they use any way out to avoid being held accountable. This most recent effort by the board, hiring a firm to educate them on the ways they uphold oppression, is the last of many attempts to show how much they have changed; however, the board itself has not changed and neither have their actions,” read some of the statement published by TRT.

“Boston Pride is not an organization that follows the legacy of Marsha P. Johnson, Sylvia Rivera, and the many LGBTQ+ trailblazers that fought for our rights, but rather, a group exercising power over communities and taking money from corporations to recycle the same parade and parties every year.”

According to Casey Dooley (2020) — a resigned Chair for Black Pride, an arm to Boston Pride — the current Boston Pride board does not prioritize the needs of marginalized communities.

“Our membership has spoken, electing one of the most diverse Heritage of Pride Boards ever,” said André Thomas, newly elected Co-Chair of the organization. “Our members realize this moment requires new voices with more diverse, lived experiences — and while we are proud to see people of color make up over half of the Board for the first time, we know we still have work to do concerning trans, female and bisexual representation within our membership as well as our Board.”

NYC Pride announced the creation and launching of new policies that “address the presence of law enforcement and NYPD at Pride events in New York.” Seeking to create safer spaces for the LGBTQIA+ and BIPOC communities at a time when violence against marginalized groups, specifically BIPOC and trans communities, has continued to escalate, the organization has stood for the rights of the most marginalized in the community and beyond. To that effect, organizers of NYC’s Pride parade have decided to ban police officers from participating in festivities until 2025, according to a statement released on its website.

“Effective immediately, NYC Pride will ban corrections and law enforcement exhibitors at NYC Pride events until 2025,” read some of their statement. “At that time, their participation will be reviewed by the Community Relations and Diversity, Accessibility, and Inclusion committees, as well as the Executive Board. In the meantime, NYC Pride will transition to providing increased community-based security and first responders, while simultaneously taking steps to reduce NYPD presence at events.”

Unlike Boston Pride, NYC Pride listened to their local stakeholders and brought to the table key organizations lead by QTBIPOC people.

“This announcement follows many months of conversation and discussion with key stakeholders in the community,” said Thomas. “We would like to extend our thanks to the Anti-Violence Project which provided invaluable advice and counsel to help us take these important steps. We are also grateful for the contributions of David J. Johns, Executive Director of the National Black Justice Coalition, Anita Dolce Vita, Owner, Creative Director, and Editor-in-Chief of DapperQ, Shijuade Kadree, Principal and Founder, Compass Strategies Consulting, LLC, and Devin Norelle, model, advocate, and writer for their guidance in helping to inform these changes.”

NYC Pride is working “to increase the quality and quantity of partnerships with community-based organizations. This year’s roster of Pride events features a diverse group of speakers and presenters, and BIPOC influencers and organizations will continue to be at the forefront of NYC Pride’s social media platforms. The dedicated QPOC contingent of the NYC Pride March will be prominently featured this year and in future years thereafter.”

In April of this year in Boston, BP formed a Transformation Advisory Committee (TAC) aimed to, according to a release on their website, “advise the organization during the ongoing transformation process to ensure that its vision, mission, and values are in alignment and in the best interest of the LGBTQ+ community. One of the primary responsibilities of the TAC is to oversee the recruitment of new Boston Pride board members to ensure that the board is reflective of the diversity of the LGBTQ+ community, and to ensure that the board is inclusive of all people in the community.”

In May, GLAD joined Black trans leaders, resigned and former Boston Pride volunteers in calling for a transformation of the Boston Pride organization.

Boston Pride’s 2021 Parade and Festival have been postponed, according to its website. To this date, their all-white Board of Directors is comprised of 5 members: Linda DeMarco (president), Martha Plaza (clerk), Malcolm Carey (treasurer), Deborah Drew (member), and Tina Rosado (member).