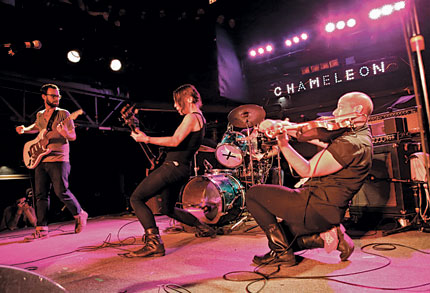 The Shondes will headline the second ever Break the Chains event, Saturday, February 21 at MakeShift Boston.
Photo: The Shondes

The Shondes will headline the second ever Break the Chains event, Saturday, February 21 at MakeShift Boston.
Photo: The Shondes

BOSTON, Mass.—Break The Chains is a new semi-monthly dance party in Boston focused on bringing together activists and artists, giving voice particularly to queer and transgender performers, artists of color, and other marginalized musicians. Organized by Jamaica Plain-based genderqueer singer/songwriter and activist Evan Greer and local singer/activist Myriam Ortiz, the event debuted and January, with the next show schedule for February 21, 2015.

“Boston has a ton of really great LGBTQ+ events, but so many of them are tailored for one very specific part of our community,” said Greer, who is also campaign director at Fight for the Future, a Massachusetts-based Internet freedom nonprofit. “I wanted to organize an event that was about bringing queer people of all genders together around a common love for social justice, awesome live music, and, well, booty shaking. Break the Chains is an intergenerational, anti-racist event that’s very intentional about elevating the voices of marginalized performers of all identities.” [pullquote]The idea for Break the Chains came from wanting to book queer bands more regularly and cohesively. For Greer, the name “Break the Chains” is about breaking the chains of oppression “that hold us down and keep us apart.”[/pullquote]

Greer dropped out of college to pursue music and toured for years, bringing her four-year-old along for the ride.

“I had a blast and by all measures my music career was a ‘success,’ but I know how hard it is, even for some of the better known queer and transgender performers out there, to find good gigs that pay them enough to support their art,” said Greer.

The idea for Break the Chains came from wanting to book queer bands more regularly and cohesively. For Greer, the name “Break the Chains” is about breaking the chains of oppression “that hold us down and keep us apart.”

“This dance party is about breaking down sexism, homophobia, transphobia, racism, ableism, ageism, and all interconnected forms of oppression, and having a really freaking good time while doing it,” Greer said. “Break the Chains is a political dance party. The bands we book have something to say about what’s going on in the world, and not just about LGBTQ+ issues. At our last party people were dancing hard to Azealia Banks one minute and then listening to a live folk song about Palestine the next minute, happily cheering the whole time.”

Greer explained why she feels these events are important for the LGBTQ community and beyond, and what she hopes people will gain by attending.

“Break the Chains is a way for the LGBTQ+ community in Boston to unite with the activist community at large here working on so many important issues that affect all of us,” Greer said. “First and foremost, I want everyone to have an amazing time and dance like crazy in whatever way feels great to them. I love sitting there at the door watching everyone party down and feeling like I’ve accomplished something positive for our community. But perhaps more importantly, I want people to meet each other and forge connections that lead to a stronger and more united LGBTQ+ community that stands in solidarity with other struggles like the Black Lives Matter movement, for example.” [pullquote]“We can’t end homophobia and transphobia without addressing racism. We can’t end racism if queer and trans people of color are considered less human than others. Our struggles are connected…”—Activist and Organizer Evan Greer[/pullquote]

The Shondes (rhymes with “Hondas,” and Yiddish for “shames” or “disgraces”) are a rock band from Brooklyn, NY, who, according to Greer, play Bikini Kill-meets-Bruce Springsteen-style sing-along anthems. They will be one of the headliners for the February 21 event.

“I think artists and activists have a lot in common and also a lot to learn from each other about process, flexibility, determination, and building community between us has the potential for creating a huge impact on our world,” said Eli Oberman, co-founder and violinist for The Shondes. “And for the band, since the art we make isn’t necessarily always overtly political but we’re very committed to our politics as people, it’s important to us to situate ourselves that way in the press and in what kinds of shows we play. So it’s definitely an honor to be included in the second ever Break the Chains.”

Louisa Solomon, co-founder, vocalist and bassist for The Shondes, also shared her take on how art and social justice feed each other.

“Art can inform justice work in many different ways; it can directly address justice issues, educate listeners, inspire listeners to speak out and act,” Solomon said. “There’s an incredibly varied history of ‘protest music’ and there are also many artists whose work simply inspires listeners—or viewers—to feel alive and engaged in the world, which can certainly have a huge—if less obvious—effect on justice work. Social justice issues can also inspire and inform art if artists have their eyes and ears open to the world, and write/create as a way of engaging with it.”

Greer said the atmosphere for the event is casual and fun, with a mix of live music and DJ sets. The last event had attendees ranging in age from about three to 75. Greer said they would like to start offering local nonprofits and activist groups the opportunity to table about their causes as the event, and are also interested in sponsorships. Currently, all donations from the events go either directly to the touring bands or to cover the expenses associated with the event, including space rental, costs for food and drinks, and poster printing. In the future, if the events continue to grow and generate funds, Greer would like to have a featured activist group every month to which some of the funds are donated.

“Art and music have been essential components of every successful social movement throughout history,” said Greer. “It’s so important that the LGBTQ+ community creates its own art and culture and doesn’t just accept whatever dominant culture says about us. From the songs of the civil rights movement to labor anthems to the very first queer rock songs, we need music and art to keep us going. Music is a tool, a weapon, and a medicine. We can use it to communicate ideas and fight oppression but also to heal ourselves and give us energy for the beautiful struggle to come.”

The next event, like the first, will be held at MakeShift Boston. It will feature The Shondes, Evan Greer & Friends, Myriam Ortiz & Friends, Hailey Wojcik, and DJ Dayglow. The March 17 lineup will include Defiance, Ohio; Purple 7; and High Dive.

“All forms of oppression and exploitation are so interwoven and connected that if we’re ever going to gain our freedom it will have to be by working together,” Greer said. “We can’t end homophobia and transphobia without addressing racism. We can’t end racism if queer and trans people of color are considered less human than others. Our struggles are connected, which is kind of awesome, because it means that we can and must walk the path of liberation together. I hope these dance parties can be just one tiny part of the social fabric we need to create a movement of movements that lifts all of us up.”

For more information on Break the Chains and upcoming events, check out the Facebook event page at tiny.cc/eskzsx. For more on The Shondes, visit www.shondes.com.