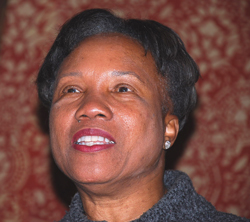 For the third time in eight years, the City of Cambridge hosted an LGBT town hall meeting — its purpose to provide a forum for community members to voice concerns and express interests directly to local government officials.

This year’s gathering was held Saturday, Oct. 27, from 9:00 a.m. to 2:00 p.m. at City Hall in the historic Sullivan Council Chamber. More than 50 people attended, with E. Denise Simmons, vice mayor, serving as host.

“I want to make sure that city officials hear from all of their constituents, and everyone must realize that [he or she] has a role to play in shaping community,” she said. “Town meetings are as old as our democracy, and they are the best way for citizens and their representatives to have an unfiltered, honest discussion about the state of the community.”

Attendees heard from two featured speakers. One of them was longtime Cambridge LGBT community leader Sue Hyde, who serves as director for the Gay and Lesbian Task Force’s annual Creating Change conference, as well as the advocacy organization’s New England field organizer.

Hyde spoke about “the renowned writer, educator, feminist, transcendentalist, and rebel Margaret Fuller,” born in the city in 1810.

The Margaret Fuller Neighborhood House (founded in 1910), said Hyde, initially served as settlement house to provide information and services for immigrants, but now includes a wide range of services for all ages from infants to toddlers — serving a food pantry, an out-of-school-time lunch program for children, summer-camp youth outreach, health-related programs for seniors and men of color, community organizing, an open computer center, and free technology classes.

“As I thought more broadly about our overall project of securing social justice, and full equality under the law for LGBT people and our families,” said Hyde, “I realized that much of our work to date has been to establish sanctuaries or safe spaces, much like the Margaret Fuller House for immigrants and low-income people, in which we seek respite from an unwelcoming and sometimes unsafe world.”

“But sanctuary spaces are just the beginning,” said Hyde who went on to note Cambridge has gone “well past the sanctuary stage to a point of integration of GLBT people in every aspect of our civic, religious, and social life.”

“We’re here. We’re queer. And while we go shopping, we also run the shops, manage the restaurants, drive the research and development at Kendall Square, teach the kids, raise the kids, pick up the trash, run the city government, and enjoy the rich and stimulating environment of Cambridge,” said Hyde.

A longtime straight ally of the LGBT community, Rushing, in his keynote address, reminded attendees that democracy should protect minorities from “the tyranny of the majority.”

In Massachusetts, he said, people do not get to vote automatically on civil rights issues such as same-sex marriage because the state’s Constitution includes protections that keep the majority from deciding on minority rights.

Rushing was referring to provisions, which require the Legislature to approve proposed constitutional amendments through a citizen’s initiative process before they are advanced for voter approval. In fact, three-fourths of Massachusetts’ lawmakers must agree before voters get to decide.

And lawmakers turned down a proposed constitutional same-sex marriage ban in 2007, thereby denying majority vote on the minority rights of gay couples to marry.

“That vote was significant,” said Rushing, because marriage equality did not result from “an activist court. There was a lot more than a group of smart justices.”

Established in 2004, the mission of the GLBT Commission is “to advocate for a culture of respect and to monitor progress toward equality of all persons with regard to sexual orientation and gender identity.”

“We have laws that protect LGBT people, but it’s more than that. What are the policies and practices? What kind of training can be done for staffs?” said Gintell naming those that provide services and programs for senior housing, health care, assisted, and after-school programs for youth.

Sure enough, Cambridge has experience in making the city an overtly LGBT friendly place. The city boasts a string of firsts. In 1984, the municipality was the first in the state to adopt a human-rights ordinance inclusive of sexual orientation. It was subsequently amended in the 1997 to be transgender inclusive.

And of course on May 17, 2004, the city became the first in the Commonwealth and nation to issue marriage licenses to same-sex couples.

The 2012 town hall gathering drew two other members of the Legislature, state Senator Anthony Petrucelli of the First Suffolk and Middlesex district, which includes his neighborhood of East Boston and parts of Revere, Winthrop, and Cambridge, and Pat Jehlen of the Second Middlesex district, which includes Medford, Somerville, Winchester, and Woburn. Both lawmakers are Democrats.

“[LGBT] issues have always been important to me,” said Petrucelli. “I look at the vote I took for equality in the Constitutional Convention as the best vote I took during my 13 years in the Legislature,” he said.

City Councillor Kenneth E. Reeves was in attendance, too. “These town meetings have served as a forum to share concerns within the LGBT community,” he said.

“They also help to build the community,” Reeves added, explaining, “There is a presumption there is a community, and you cannot have a community without being brought together. This is one of the ways this can happen.”

Reeves said he came to listen and hear “how the youngest members of the LGBT community are bearing in their journey.”

Another interest for him is LGBT seniors, “the older community as we age and move into assisted living and other spaces where we have not been before,” said Reeves. “How will the fact of our [elder] community membership impact the quality of our lives?”

In addition to the featured speakers, the Cambridge LGBT Town Hall included time for facilitated, small-group discussion. Topics of conversation ranged from economic, legal, and housing issues to public safety and police matters to health care and senior concerns to family and school considerations.

“I would enjoy more LGBT spaces, especially lesbian spaces,” she said. “I think it would be nice to have more conferences not wedded to the bars.”

An MIT doctoral student in architectural history, Sebastian Schmidt, who serves as resident tutor in an undergraduate residence, said he hoped to see “more openly LGBT, specialized tutors on campus.”

Participating in the small group discussion that Disch facilitated, Schmidt spoke to the topic of community building and connection by plugging the social media website, The Welcoming Committee (TWC), which bills itself as “a movement of people who think it’s time for LGBT folks to experience every bar, sports game, event, and major travel destination the same way straight people do,” according to its website.

TWC is essentially the same phenomenon as Guerilla Queer Bar, whereby “the gays,” using geo-location technology — there’s an app for that — take over an establishment for an evening of spirited fun and camaraderie.

Learning about TWC, Disch was already thinking ahead. “I like the flash mob stuff,” she said. “Maybe we could show up at Cambridge Galleria some day during shopping season. Get a couple hundred people for lunch. We’re here. We’re queer. We are visible.”

Queers Have Something To Teach About Spirituality