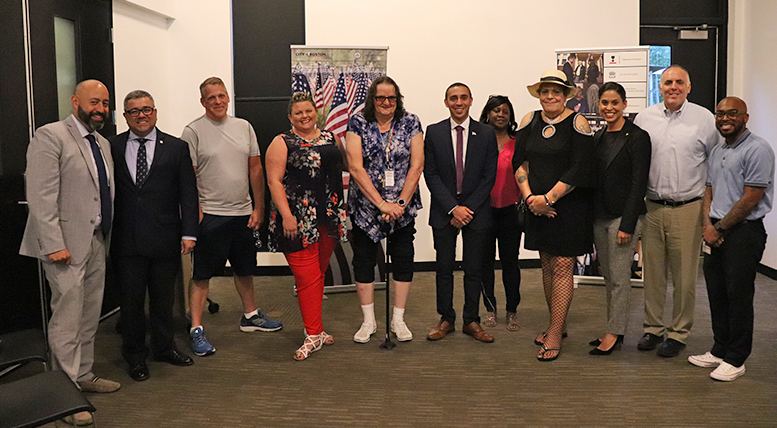 He was nervous, agitated, and looked shaken as he stood at the front of the room. He never gave his name but introduced himself to the audience of more than a dozen people by rattling off the exact amount of time he served in the U.S. Navy: nine years, 10 months, and 24 days.

Out of all the speakers that evening, he was only one who chose not to stand behind the podium; he also declined to use the microphone, instead choosing to speak to the room in a deep, booming voice with a thick Massachusetts accent. With salt-and-pepper hair, a confident gait, and a shy smile, he anxiously related his story of being gay in the Navy.

He’d gone through two engagements with women, and after the second one ended, his mother called him and asked if he was gay.

“I’m like, ‘Well, I guess I am,’” he recalled admitting to himself, but not his mother.

He met his first boyfriend after that.

“I was in love with him, he was in love with the fact that he could do whatever he wanted and get away with it,” the anonymous man shared. “I couldn’t really talk about the problems I was having with him with anybody because I was gay, he was a guy. This shouldn’t have been happening.”

The relationship devolved into one of emotional blackmail, according to the veteran. The abusive boyfriend, when the relationship turned sour, would threaten to out him to his family.

The relationship ended when he was stationed in San Diego, but he identified his colleagues in the Navy as “shipmates,” not friends.

Eventually, he left the military, but not of his own choosing.

“I served nine years, 10 months, and 24 days and I was honorably discharged, but I left the service without my honor,” he said.

Two weeks before he was to reenlist, his secret was exposed. Being single and a low-ranking officer, he slept in a bunk on the ship he served on. A fellow sailor found a photo of him and a former boyfriend tucked away in his bunk bed.

“I suggest you don’t re-enlist, because I have a photograph of you and another guy in your underwear and you guys are hugging each other,” the sailor said to the vet.

“This is good therapy because it allows me to start being who I am,” he said at the end of his speech.

A round of applause followed.

“In those days, the witch hunts were real.”

On the evening of Friday, July 20, the City of Boston held an LGBTQ Veterans Town Hall at District Hall in South Boston. The event was an opportunity to allow LGBTQ veterans to speak about their lived experience and also provided the City an opportunity to collect data on how best to serve this specific population.

“Every time we have one of these, it’s been amazing to hear the stories that come from them,” said Giselle Sterling, commissioner of Veterans Services for the City of Boston. “We want to do right by what we heard. It went really well. The respect we were going for was in the room.”

From February 28, 1994 to September 20, 2011, the United States government enforced Don’t Ask, Don’t Tell (DADT), a policy that explicitly banned openly-LGBTQ people from serving in the armed forces. Prior to the policy’s implementation, however, there were strict rules in several areas of the armed forces that allowed for the dishonorable discharge of openly-LGBTQ people.

Roughly half a dozen veterans spoke of their experiences in the military, and the stories were harrowing.

“For all those years I served in diverse [positions], I served with pride, honor, and commitment, but I also served in silence of who I truly was,” said Robert Santiago, deputy commissioner of Veterans Services for the City of Boston. While in the U.S. Navy, one of Santiago’s jobs during his career in the 1980s was something that hit too close to home. “I worked in the legal department. And part of my duties was to assist in preparing documents with evidence—or without evidence—of a sailor’s perceived homosexuality. In those days, the witch hunts were real.”

For seven years, three months, and 14 days, Rebecca Jeen served in the U.S. Air Force and had a unusual story of how she came to accept her identity as a transgender woman.

Stationed in England from 1975 to 1978, Jeen, who identified as male at the time, was in a store perusing dresses indiscreetly.

“That’s not your size,” Jeen recalls a woman telling her about a dress that she was eyeing.

“I didn’t come completely out until 2008,” she said. “That’s a long time. As I’ve moved on with my life, one thing that I’ve noticed is that I love helping people, which helps me.”

Jeen is an active member of the Transgender Vet2Vet group, which provides support for LGBTQ veterans.

“I must say I’m proud to work with the City of Boston’s Office of Veterans Services,” said Marty Martinez, the chief of Boston’s Health and Human Services division. “Through the leadership of Commissioner Sterling, we are engaging our veterans and their families; we are advocating for assistance in their time of need and connecting them with the services they’ve earned. For those veterans that have returned home, it’s imperative [that] we, as a City, take a holistic approach and work to enhance the veteran community for every veteran regardless of place of origin, circumstance, or orientation.”

November 2017 saw the first LGBTQ veterans town hall and Martinez says that the plan is to expand upon services for marginalized veterans.

“Our goal with this event and others is to facilitate real and meaningful conversations that help strengthen the connection our veterans have with one another and to recognize that, while progress has been made in supporting our LGBT military members, there is more work to be done,” he continued. “Going forward we will have more of these town halls … We will be hosting town halls to support members in the African-American community, women veterans, Latinx veterans, and more.”

[This exclusive report was first published on the August 2, 2018, issue of The Rainbow Times.]