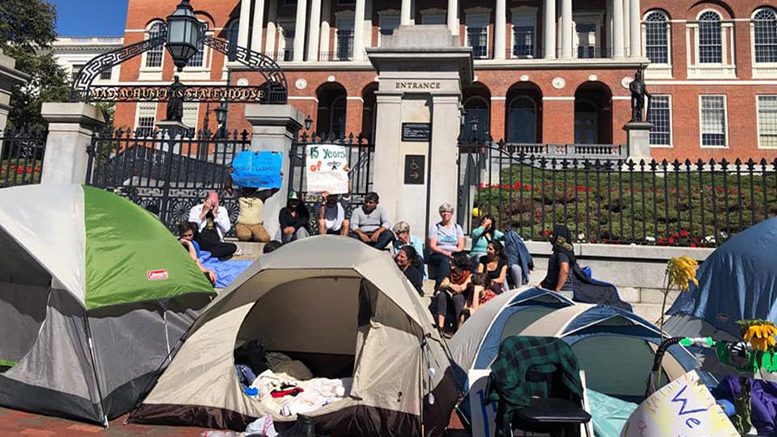 Cosecha continues the fight for human and immigrant rights

MARLBOROUGH, Mass.—Tomorrow, Sunday, November 3rd, over one 100 Cosecha leaders from across the state will convene in Marlborough to celebrate the past year of fighting for the passage of House Bill 3012, An Act Relative to Work and Family Mobility, legislation that would grant access to driver’s licenses to undocumented immigrants.

Cosecha leaders from Lawrence, Worcester, New Bedford, East Boston, Brighton, Lynn, and Pittsfield will be convening, all together again, almost one year since the first state-wide dinner last December and the kick-off the “Manejando Sin Miedo” (“Driving Without Fear”) campaign during the winter of 2018.

Driver’s licenses are a key issue for the immigrant community and the fight for immigrant justice, because driving without a license, to get to work—to take care of family—to do the labor that keeps this country functioning, is a key reason why people get detained, deported, and separated from their families in the “progressive” state of Massachusetts. Access to a driver’s license would greatly reduce fear and risk that undocumented immigrants face every day: a simple trip to the grocery store would no longer carry the risk of being separated from their children.

“I’m afraid every day conducting daily activities, but I feel a sense of community in Cosecha,” said Luis Vergara, Worcester Mass. “I feel a part of a larger effort with a community that understands my plight. I hope we can get others to see how life-changing these licenses would be for our community.”

Since last winter, undocumented leaders have been building up popular power in their community by mobilizing neighbors and family to take action to bring attention and pressure to the Work and Family Mobility Act. Leaders from different “circles”, groups of people in each city who have come together to strategize and organize taking action, held six marches across the state in their respective cities during the month of March. After getting more and more support and attention from the community during those local marches, leaders then decided to embark on a four day long walk across the state.

Starting with a big breakfast in a living room in Framingham, immigrants and allies then walked for four days straight, sleeping on church floors, singing “Licencias Si, Promesas No!” (“Licenses Yes, Promises No!”) through the wind and rain, and ending with a rally outside of the State House. By walking, leaders proved the sacrifice it takes to not have access to a driver’s license in the state. Leaders decided to escalate from raising awareness to direct action to pressure key politicians who have the potential to move the bill forward such as Speaker of the House Robert DeLeo and Chairman of the Transportation Committee Representative Straus. Two dozen leaders and allies spent three days and two nights in front of the statehouse in tents, in a mock celebration of 15 years of false promises, bringing attention to the fact that Democrats have stalled this bill since its first introduction in 2004. Leaders and allies continued to pressure Speaker DeLeo and Rep. Straus by taking cake to their offices for fifteen days, ending with a sit-in at DeLeo’s office.

This Sunday’s statewide assembly will set the course for the next phase of the campaign; leaders are not willing to wait any longer. Each day that passes is another case of family separation in a state that claims it is a liberal state. Now more than ever, politicians need to show their support for the immigrant community by taking action on this bill.

NOTE: The document was edited and it is not solely a news report.