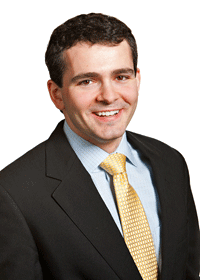 Now that the rainbow dust is starting to settle after all the big gay parades celebrating the Supreme Court decision, we can finally get down to the real business of marriage equality: aborting babies.

The two things social conservatives detest most in the world are abortion and same-sex couples getting married. On the surface, the two are not linked in any clear way. It takes a special kind of twisted logic to connect the two.

Thankfully Ryan T. Anderson, a senior research fellow at The Heritage Foundation, has the kind of skills one needs to blame the gays for abortion.

In a July 20 column on TownHall.com, your source for right-wing quackery, Anderson claims that “the breakdown of the family” is what drives abortion, and since the Supreme Court redefined parenthood by legalizing same-sex marriages, children are now at greater risk than ever before.

“The best protectors of unborn children are a strong marriage culture and people who take the virtue of chastity seriously,” writes Anderson. But with marriage now reduced “to a mere contract,” America is essentially flipping chastity the bird. And, Anderson warns, “Without a culture of chastity, we will never have a pro-life culture.” [pullquote]In a “culture of chastity” people would only have sex after they were married and that sex-having would only go on in order to make babies. [/pullquote]

In a “culture of chastity” people would only have sex after they were married and that sex-having would only go on in order to make babies. Anderson argues that since same-sex couples can’t make babies, they not only shouldn’t be allowed to get married, but they obviously should not have sex and should not be allowed to pursue reproductive technology in order to have kids.

Never mind the fact that all credible research has found that two dads or two moms are just as good, if not in some cases better, than a mom and a dad. And that children conceived via assisted reproduction to these couples are never an “oops.” These are wanted, carefully planned for children.

“A just society makes sacrifices to ensure that children are known and loved by their own mother and father, while doing what it can to help children denied that blessing by misfortune,” Anderson writes, apparently unaware of or unconcerned by how unjust our society is when it comes to children who experience “misfortune.” Our foster care system, for example, is a mess. Read “To the End of June: The Intimate Life of American Foster Care” by Cris Beam and you’ll see how misguided Anderson is in claiming that the best way to help children is to keep them away from gays. [pullquote]Never mind the fact that all credible research has found that two dads or two moms are just as good, if not in some cases better, than a mom and a dad. And that children conceived via assisted reproduction to these couples are never an “oops.”[/pullquote]

Of course, then Anderson reveals why he really hates reproductive technology: unused embryos, which each count as an abortion in his book. No surprise, he is against stem-cell research or using these embryos for anything other than makin’ babies. He’s against birth control, too, by the way. A “culture of chastity” has no need for it, obviously.

So there you have it. Since gays can get married now, straights are going to just start extra-maritally humping up a storm, creating a bunch of babies to abort while the gays “manufacture” (Anderson’s word, because the children of gays aren’t human apparently) kids and de-facto embryo abortions: hence marriage equality “puts unborn children at risk.”

Airtight logic. Everybody can go home now. Ryan Anderson has won this round of Insane Arguments. Stay tuned for Anderson’s next column about how the global warming “hoax” is perpetuated by hipster beard length.