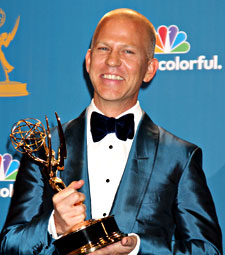 The late Touko Laaksonen, the Finnish artist also known as “Tom of Finland,” probably did more to push gay male erotic images into the mainstream than anyone else in the 20th century. His illustrations were designed to inspire lust and to erase the boundary between art and pornography. They also helped re-create happier, hornier self-images for many gay men in the 1970s with their fantasies of muscular masculinity, confidence and outsize sexual achievement. One documentary short film, Boots, Biceps and Bulges: The Life & Works of Tom of Finland, arrived in the late 1980s, while 1990’s Daddy and The Muscle Academy was an LGBT film festival staple in its moment, just as Tom himself was dying at age 71. Now a biopic currently titled Tom of Finland is in production, ready to tell the story of the sexual and artistic pioneer. Finnish director Dome Karukoski will helm the feature, which has yet to be cast. And it has the official, authorized blessing of the Tom of Finland Foundation, so as extremely hot men find their way into the cast, you’ll hear about it here first.

Alan Ball has a to-do list when True Blood comes to an end: He’s going to get a lot of guys naked. That means he’s writing and directing I Am Chippendales, adapting his screenplay from the book by Rodney Sheldon. It’s the story of Somen “Steve” Banerjee, an Indian immigrant who started his career pumping gas in Los Angeles before running an upscale nightclub that would evolve into the Chippendales male revue franchise. Exploding into the mainstream of pop culture in the 1980s, when gangs of women decided, en masse, to begin attending male strip clubs in groups, Banerjee became very, very rich catering to the as-yet-untapped market potential of the straight female (and gay male) libido. As the decade wore on, however, Banerjee’s excessive lifestyle and paranoia grew. Things got weird, illegal activity followed, assassination plots were hatched (!) and the man who brought so much joy to so many people via the simple act of taking off a man’s shirt and leaving the bow tie affixed to his neck, found himself in prison, where he died. One day there’ll be a happy male stripper movie (downbeat Magic Mike, we’re looking at you) but until then we’ll take what we can get. Casting is underway right now, and Ball hopes to start shooting sometime in early 2014. Until then, keep it in your pants.

Earlier we reported that Ryan Murphy’s latest project, the HBO series Open (note: this is the one that will not involve singing teenagers or covens), would star Wes Bentley. That’s still the case, but he’s got more people to act opposite and behave R-ratedly around him at this point. Jennifer Jason Leigh, Scott Speedman, Mission Impossible: Ghost Protocol’s Michelle Monaghan and Fringe’s Anna Torv have all signed on to participate in what is described as a “provocative” investigation of human sexuality and modern relationships. That means everyone on the show ’till be attractive and, really, that’s kind of what you want with a show about sex. With Murphy at the helm it’s certain to have its share of gay characters and plotlines, we just don’t know who the homo characters are going to be at this point. And, most importantly, since it’ll be on HBO, we’re just going to start lobbying right now for full frontal nudity from everyone in the cast. No more sex with bras on and strategic sheet placement! Liberation for the flesh!

Set your DVR because Oprah’s gearing up for a late October night of gay programming that’ll probably make you laugh as well as move you to tears. On Oct. 27, the OWN Network will air Oprah’s Next Chapter: Gay In Hollywood. No, she has nothing to announce about Gayle, but she will be interviewing the hilarious Wanda Sykes, Modern Family’s Jesse Tyler Ferguson and actor/producer Dan Bucatinsky about how being openly gay has affected their careers in entertainment. Immediately after that, OWN will host the television premiere of Bridegroom, the devastating documentary that’s been the talk of LGBT film festivals all year. It tells the story of Shane Bitney Crone and Tom Bridegroom, a young male couple whose happy relationship was cut short when Tom died in tragic accident. What unfolded after that sad day – Bridegroom’s family rejected Crone entirely and denied him access to his partner’s funeral and more – would come to shed ugly light on what happens when same-sex couples in relationships without the legal protections of marriage find themselves cut out of families during times of crisis. Don’t miss it.

*Romeo San Vicente should probably clear all those old episodes of True Blood featuring shirtless Joe Manganiello out of his DVR… . He can be reached care of this publication or at DeepInsideHollywood@qsyndicate.com.