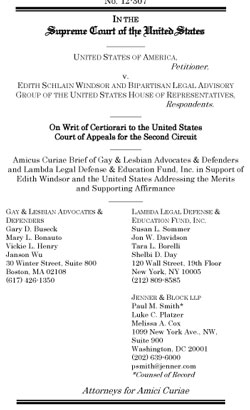 To read the brief: http://tinyurl.com/adouct5

“DOMA is a recipe for a violation of equal protection guaranteed by the U. S. Constitution: It targets a particularly disliked group, impacts important personal interests, and represents a one-time departure from the usual process of allocating federal rights and benefits,” said Susan Sommer, Lambda Legal Senior Counsel and Director of Constitutional Litigation.  “DOMA is a perfect storm with multiple elements all of which call for careful judicial review. Its passage was accompanied by unambiguous and overt statements of moral disapproval of gay people, indicating its very purpose was discriminatory. It is precisely the sort of statute that should fail rational basis scrutiny.  Indeed, it’s harder to imagine a clearer example.”

The brief argues that, although laws such as DOMA that discriminate based on sexual orientation should be subjected to heightened scrutiny – a more rigorous standard of constitutional review – DOMA does not even pass the less strict, rational basis standard. Drawing on the Supreme Court’s ruling in Romer v. Evans, Lambda Legal’s historic 1996 case, the brief argues that DOMA fails this less strict standard because it heaps upon married same-sex couples disadvantages that defy credible connection to any legitimate purpose.  DOMA amended more than 1,000 federal laws and regulations ranging from tax policy, federal employee benefits, rights under private pension plans and conflict-of-interest rules.

Mary L. Bonauto, GLAD Civil Rights Project Director, commented, “DOMA is akin to so many of the anti-gay laws still plaguing gay people in many States.  In addition to showing why DOMA fails, the point of this brief is to demonstrate that under the most basic equal protection framework, anti-gay laws are indefensible.”

In addition to the Lambda Legal/GLAD brief, over forty other friend-of-the-court briefs are being filed urging the Supreme Court to affirm the Second Circuit Court of Appeals ruling in Windsor, including one joined by 278 businesses and municipalities.

In addition to Sommer and Bonauto, other lawyers on the brief include: Paul M. Smith, Luke C. Platzer and Melissa A. Cox of Jenner & Block LLP who teamed up with GLAD on its DOMA litigation; Jon W. Davidson, Tara L. Borelli, and Shelbi D. Day, of Lambda Legal; and Gary Buseck, Vickie L. Henry, and Janson Wu of GLAD.

Lambda Legal is a national organization committed to achieving full recognition of the civil rights of lesbians, gay men, bisexuals, transgender people and those with HIV through impact litigation, education and public policy work.