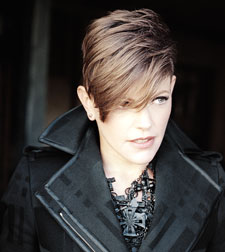 To quote a Dixie Chicks song, fearless frontwoman Natalie Maines has “been a longtime gone.”

Seven years after one of the most successful country music acts released Taking the Long Way, and its unapologetic single “Not Ready to Make Nice” in response to the singer’s political dig at then-President George W. Bush, Maines goes her own way for her first-ever solo album, Mother. Parting with longstanding bandmates Emily Robison and Martie Maguire for the album (don’t worry, she says there’s a “50/50” chance for a reunion LP), it’s also decidedly not country.

In our recent chat, Maines revealed why she went rock (country “seemed so fake”), how being disowned–and her new short hair – made her feel closer to the gay community and whether now, a decade after her Bush outburst, she’s ready to make nice.

Chris Azzopardi: You’re sporting that punkish ’do; before, with the Dixie Chicks, it was the long, blond locks.

Natalie Maines: I know. Well, with the Chicks, I definitely felt like I was playing dress up a bit – but I liked it!

Q. Are you conscious of your look and how it represents the music?

A. With two kids, there’s not enough time in the day to spend on what I look like; this is a much easier look. And it fits my personality more. I had short hair growing up, and it always felt right for me.

Q. Has the short hair scored you more lesbian cred?

A. (Laughs) I barely leave my house. So maybe. But the lesbians liked me already! Yeah, this is definitely a lesbianish haircut I’ve got going on. I don’t mind. I love Rachel Maddow. She would be my lesbian girl crush.

A. She’s hot! And she’s smart and beautiful … and I like her hair.

Q.  I could see it working out between you two.

A. Yeah, I think that would work. I don’t know if my husband or her girlfriend would think so. (Laughs)

Q. You’ve always had a really loyal gay fan base, even before you publicly chastised George W. Bush. How do you explain your connection with gay fans?

A. We had some very costume-y, over-the-top looks that the gays do appreciate. (Laughs) But after the controversy, I feel like there was even more of a connection, and that’s just because we both know how it feels to be hated just for who we are – not for doing anything, bothering anyone, murdering anyone or being arrested. Just for being us. Apparently, that’s not good in some people’s eyes. But also, too, to just continue being and let other people get used to it–learning to be OK with yourself and just putting it out there, and people can either like you or not, but it’s really on them.

Q. Were you noticing more support from the gay community at shows after the incident?

A. Yeah. And we would get lots of emails, and a lot of the community would come right up and say, “I love that you did this. I didn’t listen to your music before, but after this, I went and bought every record.” However it was that they showed their support, I definitely felt it.

Q. During the time country radio blacklisted the Dixie Chicks and country stars stopped supporting you, what was it like for you behind the scenes?

A. At the time, I was just in fight mode and feeling defiant and ready to take on everything and everybody. Actually, at the time, we were getting such overwhelming support and letters from people in the industry–actors and all sorts of people–and that was all really positive. I was always able to separate business from personal–and my friends weren’t fellow country artists, so I really didn’t care about that. What I cared about was being banned at a corporate level; it felt very un-American and very not OK to me, so that was my issue. And that is my issue with country music.

I don’t have an issue with country music fans. I don’t have an issue with country music artists. I was very honest about my influences and the kind of music I came from – and country was not it. I say that now and people think, “Ooh, she’s mad at country,” and I never listened to country. I would say that if ever asked, but I was never asked as much as I am now. But … I can’t remember what I was talking about. (Laughs)

Q. You were talking about not being fond of the country music industry.

A. Oh, you asked if I felt let down. I mean, it did suck to see all these radio stations cave so quickly to emails and phone calls they were getting and feed the controversy, which was so really nothing and ridiculous. That did feel like a stabbing in the back, just because I felt like we waved that country flag and we had country pride for all those years. But everyone jumped on board. We were fun to hate.

Q. That’s because you were ahead of your time.

A. Exactly. Always have been.

Q. When hardly anyone in country music was speaking out about equal rights and gay marriage, you were.

A. Well, that’s why I was so shocked that people were so shocked that I was a Democrat and wasn’t for the war! I mean, I did not ever feel like I was hiding something. To be in country music, I felt like we were accepted because of our differences, really, and we went beyond your typical country fan base, and I feel like it was because we were different. It was a real surprise to me that people thought I was something that I wasn’t. I felt disappointed in myself! How could I let anyone think anything else?! (Laughs) But we did always answer questions if we were asked them, and I always supported women’s rights and gay marriage and everything.

Q. Why do you think more country music artists haven’t taken that step in publicly supporting equal rights – even though some of them might?

A. Well, they weren’t speaking out about it before, either. But I’m sure some do. How I always viewed country music growing up–why I didn’t really relate to it or why I wasn’t drawn to it–was because, to me, it seemed so fake. Everyone was putting on these fake smiles, nobody had any anger and they were all just happy to be there. I just did not relate to that. Shoot. What was your question again? I get so on a soapbox! (Laughs)

Q. About the lack of country artists advocating for equal rights.

A. I just think that’s the nature of country music. I don’t know. I just don’t feel like they ever have. I have to think that Faith Hill has answered that question, honestly, and that she’s for gay marriage. I don’t know that she is, but I’ve spoken to her some and I know that she’s a pretty liberal person. I don’t keep up with her press so I don’t want to assume these people haven’t spoken out.

Q. Will there ever be another Dixie Chicks album?

A. I don’t know. It’s possible. I’d say 50/50. (Laughs) I try to not predict the future or project; I just really try to live in the now, so I’m open to it. I have no ill feelings about the Dixie Chicks. I think right now, it’s logistics. There are eight kids among the three of us and, for me, making an album takes a lot of focus and a lot of concentration and a lot of time, and I’m not willing to go to Texas to do that. I wouldn’t expect Martie and Emily to leave their families and come here to do that, either. I just think it’s really hard right now.

Q. With the Dixie Chicks, you covered several Patty Griffin songs, and Mother features Griffin’s song “Silver Bell.” What is it about Patty and her songwriting that resonates with you so much? The darkness? The realness?

A. It’s all of that. I’m bad putting into words things like that, but I love her songwriting. And I hate her because, not only has she written a million songs that are out there, she’s got all these songs that we’ve never even heard. It’s so hard to write a song for me! And I’m so jealous that she has, like, back stock.

Q. Why was the seven years between Taking the Long Way and this new solo album a necessary break for you?

A. Basically because kids take a lot of time. (Laughs) I just decided to dive into motherhood and do that 100 percent – just try to enjoy this time and my life and my kids’ lives and be, you know, a stable force in their lives.

I definitely felt like I had worked really hard and been on the road for over 10 years, so I did want to slow down and just get real for a while. So there was a lot of self-realization and a lot of things that went on, but yeah, I needed a long while to just … be.

Q. Why was the distinction between this album and your work with the Dixie Chicks important to you?

A. It’s just bugged me whenever I would see lead singers do a solo album that sounded exactly like their band. It always seemed to be a way to get all the money for yourself. (Laughs) So I did want to be different. But I didn’t have to be conscious of that; this is just what I’m naturally drawn to.

When we went into the studio, we didn’t even know we were making a record. I was very upfront about that with Ben (Harper’s) band, just because they were basically coming (to the studio) for free every day; they enjoyed music and they wanted to experiment and see what happens–but I wasn’t telling my management or my label, so there was no money coming from anywhere.

It was really like a band starting from scratch, everybody putting in the same amount of time and hard work … and they got paid eventually. (Laughs) There just wasn’t a discussion; it was just very organic in what naturally comes to me musically or appeals to me.

Q. Are you ready to make nice yet?

A. I don’t sit around stewing over it or thinking about it at all, but if making nice means making a country record and going back to that, then no, I’m not ready.

Q. Has there been a peace agreement between you and Toby Keith?

A. Sure, I’ve got no issues. I don’t even think about any of these people. (Laughs) I wouldn’t have even thought of Toby Keith if he hadn’t put out a picture of me and Saddam Hussein cuddling.

Q. He could’ve at least had you cuddling with Rachel Maddow. Gosh.