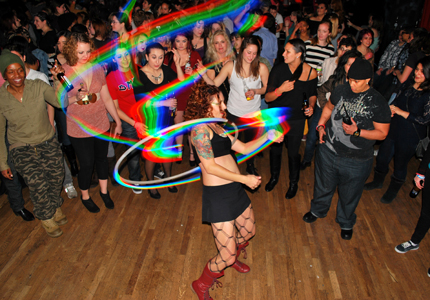 BOSTON, Mass. – Dyke Night Productions has made a lasting impression on the women’s community in Boston through memorable dance parties and charitable contributions. The organization continues to grow and attracts women from all over New England to experience Boston’s lesbian nightlife.

Dyke Night was started in 1998 by Kristen Porter as a party at a local bar near her home to assist the underserved.

“I was sitting in my living room with a group of lesbian activists trying to figure out a way we could raise money to purchase supplies to support the volunteer street outreach we did to homeless queer people,” Porter explained.

The group planned to have a party at The Midway Café, charging a nominal amount for entry. “We used the money to purchase bleach kits, safe sex materials and toiletries for the homeless in their street outreach,” said Porter.

Since then, Dyke Night has been hosting events for the Boston LGBT community. “Dyke Night is the longest running, most award winning, lesbian event company in Boston’s history and hosts the largest parties in New England,” Porter said.

But Dyke Night isn’t just about providing quality parties and events to the lesbian community. Porter started the organization as a way to support her philanthropic efforts and goals, and the proceeds raised at events are donated to a variety of nonprofit and community organizations.

According to the organizer, over $100,000 has been donated to these causes, including the LGBT Aging Project and the Network/La Red, but contributions to these organizations and the community are not just monetary. Porter has collaborated and partnered with leaders to create safe spaces and awareness of issues in the LGBT community.

Bren Cole, co-founder of ButchBoi Life, partnered with Dyke Night for “One Night Stand” events. “Dyke Night has given ButchBoi Life a huge opportunity to spread awareness of our group through our collaborations on One Night Stand,” Cole explained. “It’s helped us reach out to potential new members, build our name recognition and foster the sort of welcoming queer community that we support.”

“Dyke Night has made many efforts to include us in collaborations in the past, such as the Glitz New Year’s Eve Party at Machine and the Spring Fever! party at Felt,” said Madeleine Ashley Blum, Mad Femme Pride organizer. “Through these collaborations, we have been able to spread our friendly, positive, all-inclusive vibe to more people.”

Dyke Night is also an active supporter of Boston Pride. “They have collaborated on fundraisers and some of their members have come to volunteer at many Pride events,” said Linda DeMarco, Boston Pride president.

The organization’s philanthropy also includes animals. “After so many years helping humans, one of our newest big loves is the work we are doing helping rescue animals,” Porter said. “Last year we partnered up with PAWS New England and had a ‘Divas, Dykes, & Dog’ show at the Jamaica Plains outdoor block party.” Due to the show’s popularity, Dyke Night includes a rescue dog of the month in its e-newsletter, and many of the featured dogs have found new homes.

“We’ve had several adoptions as a direct result of the fashion show event and the monthly newsletters where one of our dogs is featured,” explained Joanne Hutchinson, co-founder of PAWS New England. “The exposure to the gay and lesbian population that has resulted from our collaboration, and Porter’s efforts on our behalf, is priceless.”

Giving back to the community and supporting important causes isn’t just an important aspect of Dyke Night, it’s the guiding mission of the organization. “I have no desire to be part of the nightlife world,” Porter said, “but I do have a passion to the make the lives of underserved people better, and this is a means to that end.”

Porter may not have a passion for creating a bustling and popular lesbian nightlife scene, but these events are wildly popular. According to Porter, the Second Saturday event hosted at Machine is the largest women’s night in Boston history. “Even with one thousand women and friends attending the event each month, we’ve been turning away hundreds,” Porter said. In response to the growing demand, Dyke Night has expanded its event offerings to include Fourth Saturdays at Machine.

“This expansion marks a new era in lesbian nightlife in Boston, with five distinct events hosted each month in four different venues, providing women and LGBT folk the diversity and choices they deserve,” Porter explained. “Each of the venues we work with has a very different feel, so we aim to cater to many different tastes.”

These events have created a lesbian nightlife community that Boston was lacking. “In the most simple of terms, Dyke Night provides a safe space for women to come out, figuratively and literally,” Porter said.

Cole agreed that Boston did not previously have a full-time lesbian space, and Dyke Night has helped fill that void in the community.

“I think people really need to know that they have a place to go where they can be safe, be accepted and have a great time with fellow lesbians,” Cole explained.

DeMarco recognized Dyke Night as the leader in creating a lesbian nightlife, and commended its contribution to the community.

“Dyke Night took the lead in bringing the lesbian community out, giving them a safe place to gather in the evening at dances,” DeMarco said. “They also do fundraisers for the awareness of women’s health and social issues within our community.”

Supporting and enhancing the LGBT community is important to Porter. “I always like to remind people that in order to have event offerings and a vibrant LGBT nightlife, events need to be supported, so be political about your choices in entertainment,” Porter said. “Support LGBT-owned business, support LGBT-promoted events and choose to attend the gay-promoted, gay-staffed events. We will only continue to have a community if we painstakingly continue to nurture it.”