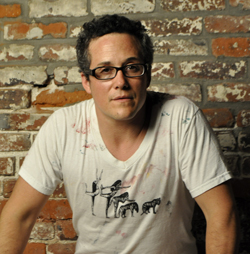 Mac MacDougall wears a t-shirt displaying his original design for Mac Ink Clothing Line, which donates 10% of each sale to a fund for transgender individuals that need financial assistance for surgery.
Photo: Jessica Conlan of Evolving Images Photography

Mac MacDougall wears a t-shirt displaying his original design for Mac Ink Clothing Line, which donates 10% of each sale to a fund for transgender individuals that need financial assistance for surgery.
Photo: Jessica Conlan of Evolving Images Photography

Despite the liberal progress the transgender community has made in terms of rights in the 21st century, many challenges still lie ahead. According to the 2011 National Transgender Discrimination Survey of Massachusetts, 76 percent experienced harassment or mistreatment as a professional, while another 39 percent were without a job.

As a result of statistics like these, a website called the Transgender Job Bank was created. The online database is a trans-friendly webpage where employers may identify themselves in favor of equal opportunity. Currently, Boston has become the area with the most job postings on the site, followed by Washington, D.C. and New York City.

“The overwhelming majority of jobs posted are from nonprofit organizations who tend to be more inclusive than other employers, and have been shown to be more likely to post trans-inclusive opportunities than mainstream companies,” said Jillian Barfield, director of the Transgender Job Bank.

The employers or their surrogates do all job postings through submissions, which are in turn manually reviewed for authenticity. Just by posting an opening on the website, employers are showing that their organization is inclusive and accepting of transgender applicants. The web page receives approximately 30,000 unique visits per year, and a total of 50,000 overall visitors, including repeat visitors.

“There needs to be more positive representation of transpeople in general. I feel like, as a trans-identified female, there’s a lot of stereotypes and misconceptions about women like me,” said Elyse Quadrozzi, a 28-year-old who grew up in Springfield, Mass. and is a high school teacher in the area. “We’re prostitutes, we’re escorts, we’re drug addicts, we’re so illegitimate that it’s almost comical in a lot of ways.”

Although settled with where her life is now, Quadrozzi experienced bullying growing up and even contemplated suicide. She said she first experienced prejudice in the workplace during a job she held at a retail chain, about six years ago, and as the first transgender employee the particular branch had ever hired, the human resources department had to create a specific cis-gendered policy.

“[I had] to abide by the dress code of being a woman, like shaving your legs, etc. So I did it. Although on certain days, because I was going through laser treatments for hair removal, I would come in more like androgynously dressed,” explained Quadrozzi.

Despite co-workers misusing female and male pronouns on a regular basis, the worst, she said, was when she wore nail polish to work while wearing more masculine clothes. She was sent home for not abiding to the male dress code for that day.

“[Nowadays] I’m out on a need-to-know basis; I’m the master of that information. I’ve had more than one or two [students] in my room crying and saying that they’re being bullied, and asking me how I’ve done what I’ve done,” explained Quadrozzi, who is a self-proclaimed Roman Catholic Italian. “I finally feel like I’m living, and I think it’s important to show young kids who might be struggling.”

Although Quadrozzi experienced this incident several years ago, the retailer might have a very different approach today. One of the most recent historic moments in transgender rights came on April 23, 2012 from the U.S. Equal Employment Opportunity Commission. The agency decided that if an employer singles out any worker or potential worker because of being transgender, it would be an infringement of Title VII of the Civil Rights Act of 1964 that forbids bias based on sex.

Tyler Rose has never experienced discrimination from an employer, but rather support. Although the 24-year-old Spring Lake, MI native is comfortable in his own skin, he considers himself “stealth” at work, and is only openly trans-identified to his bosses. He makes sure to have his paycheck handed out privately so other employees won’t have the chance of seeing his female state identification.

“My bosses right now are very supportive of me and treat me just like one of the guys,” said Rose, who currently manages a pizza parlor near Atlanta, GA. “[In five years] my ideal job is to be a probation officer. I would love to help teens so they don’t mess their lives up like I almost did with drugs and skipping school.”

In an effort to change public opinion on the subject, this May, The National Transgender Health Summit will be held in Oakland, CA. The meeting will address mental health care, specific populations and clinical care.

“You have to give people the benefit of the doubt to accept you, for who you are. You can’t just go around thinking people aren’t going to like you for saying what you are — that’s not typical conversation anyway,” laughed the openly transgender Mac MacDougall of Pawtucket, RI.

The artist, realtor and AIDS Care Ocean State employee enjoys his current jack of all trades approach to professional life, as opposed to the decade he spent working for a package delivery company.

“[The company] was probably one of the hardest companies I’ve ever worked for. A great company, the way they run the business, though, the people involved were just hard to work for … I actually had to wait, and then when I changed my name and gender and all that, I had to redo all my [pension] paperwork. They didn’t give me a hard time, but I was glad I was out of there,” said MacDougall. “I’m much happier now that I’ve figured it out.”

To learn about the Transgender Job Bank visit www.tjobbank.com, and for more information about the 2013 Summit contact transhealthsummit@ucsf.edu.