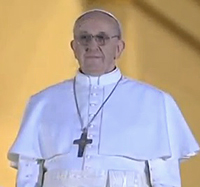 Before you go any further take a Valium, enjoy a cocktail, or get your Tagamet ready. Your blood pressure may spike.

Pope Francis I, the newly enthroned leader of 1.2 billion Catholics, does not support marriage equality and LGBTQ adoption of children. Yet his humility and training as a Jesuit, an order of pragmatic, well-educated priests, offer hope for long-term change.

As an Argentinian cardinal, he kissed and washed the feet of AIDS patients and walked the streets of the most dangerous areas of Buenos Aires without an escort to serve the poor. He cooked his own meals and used public transportation, giving up perks provided with his office.

Does this mean the Catholic Church will change its views on gay marriage and child adoption? No. It suggests, however, the pope is far more likely to listen, respect and welcome LGBTQ Catholics. Change will not occur overnight, particularly in a worldwide, 2000-year-old institution with entrenched, very powerful conservative officials.

Humility provides Francis spiritual security and his Jesuit education offers the intellectual backbone to ask quietly, “Are we, the leaders of the church, ever wrong?” He is well aware history says “yes.”

Humility often comes with finding common ground. It brings people together. Humility takes many forms. It can encourage, for example, a person to put aside personal views to exchange ideas and opinions while always respectful of the other individual. Humility is a two way street which, in this case, may lend itself to more dialogue with LGBTQ Christians.

As noted, the pope has the benefit of being a Jesuit, an order that loves learning and knowledge. Its rigorous educational standards are some of the best. Jesuits teach students to think, not parrot information all too common in public and private education.

Some have described Francis as a reformer expecting him to crack open the door to support LGBTQ civil and human rights. He is a reformer as it pertains to shaking up the byzantine, cloak and dagger Vatican bureaucracy. The pope will be a managerial and administrative reformer, not a doctrinal one. His top priority is dealing with bureaucratic inertia, corruption and institutional incompetence, not LGBTQ rights.

At the same time, he is a street-savvy man who cannot avoid the worldwide shift on LGBTQ civil and human rights. This includes South America and his native Argentina where Catholicism thrives. In addition, the latest poll in the United States indicates over half of all Catholics support marriage equality. Added to this shift, is the increasing number of non-Catholic denominations celebrating the sacrament of marriage for same gender couples.

Although significant change regarding the church’s position on certain LGBTQ rights is unlikely, the new pope may realize Rome must quietly re-think some of its positions. Otherwise, history and other Christian denominations will make Rome increasingly irrelevant. Perhaps Pope Francis will plant seeds, which will enable the Vatican to announce someday a blessing ceremony, distinguished from marriage, for same gender couples. It will not be perfect or complete justice and it will be delayed justice, but still progress.

*Paul is an author, attorney, and a seminary trained, ordained priest in greater Albany, NY. He recently authored “Lost Sense of Self & the Ethics Crisis – Learn to Live and Work Ethically,” and is founder of www.CorporateChaplaincy.biz.”