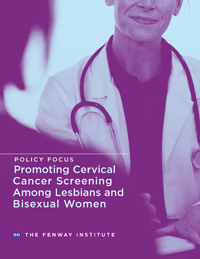 Analysis from The Fenway Institute finds lesbians and bisexual women are up to 10 times less likely to receive regular cervical cancer screening than heterosexual women, due to a misconception that sexual minority women are not at risk for cervical cancer as well as their broader marginalization in the health care system.

BOSTON, Mass. — Lesbians and bisexual women are as likely as heterosexual women to develop cervical cancer, but are much less likely to be regularly screened for it, putting them at greater risk of the potentially deadly disease, according to a policy brief released today by The Fenway Institute.

This is bad news for lesbians and bisexual women, who are up to 10 times less likely to undergo routine screening for cervical cancer. The vast majority of cervical cancers are caused by a human papilloma virus (HPV) infection, and many sexual minority women – and their healthcare providers – are under the misperception that HPV cannot be passed between women during sex. In fact, because HPV passes through skin-to-skin genital, as well as potentially through oral-vaginal and digital-vaginal contact, even women who exclusively have sex with women are at risk for contracting the virus, and by extension, cervical cancer. Multiple studies have shown that lesbians and bisexual women are just as likely as heterosexual women to have HPV and cervical abnormalities that could potentially lead to cancer if unchecked.

Current guidelines recommend that screening start for all women at age 21, regardless of HPV vaccination or age of sexual debut, and continue every three years until age 29; the screening interval may be lengthened to every five years for women ages 30-65 if HPV co-testing is done in addition to the Pap test.  Women with a history of a prior abnormal Pap test or who are immune compromised (e.g. by HIV) should be screened yearly.

“Clinicians have a responsibility to provide accurate information about the benefits of cervical cancer screening to all women and to create a conducive environment that encourages patient acceptance of this practice,” says Jennifer Potter, MD, director of Women’s Health at Fenway Health.

The Fenway Institute analysis, titled Promoting Cervical Cancer Screening among Lesbians and Bisexual Women, notes that other countries have recognized this disparity and have done more to increase screening rates among lesbians and bisexual women. In the UK, the National Health Service specifically mentioned LGBT groups in its Cancer Reform Strategy as populations targeted for improvement in its National Cancer Equality Initiative in 2007.

“Lesbians and bisexual women are less likely to be regularly screened for cervical cancer even though they are at equal risk of developing it,” said Sean Cahill, Director of Health Policy Research at The Fenway Institute.  “Providers and public health advocates should prioritize this population in cervical cancer prevention efforts and reduce this often deadly disparity.”

The Fenway Institute analysis, written by Sarah Peitzmeier, MSPH, examines the heightened risk profile of lesbians and bisexual women, such as lower rates of health insurance coverage and less access to preventive health care, including routine pelvic exams. It also describes efforts in the UK and Australia to promote Pap tests among lesbians, and why it is important to offer Pap tests to some transgender men, many of whom retain a cervix and may be at risk for cervical cancer. Providers should also be trained in broader LGBT health issues, so that they are equipped to provide clinically competent care to lesbian and bisexual women and transgender men in ways that are sensitive and culturally competent.

The brief concludes with a set of policy recommendations, including:

A PDF of the cervical cancer screening policy brief is available online at www.fenwayhealth.org/cervicalcancerfocus.

For more than forty years, Fenway Health has been working to make life healthier for the people in our neighborhood, the LGBT community, people living with HIV/AIDS and the broader population.  The Fenway Institute at Fenway Health is an interdisciplinary center for research, training, education and policy development focusing on national and international health issues. Fenway’s Sidney Borum Jr. Health Center cares for youth and young adults ages 12 to 29 who may not feel comfortable going anywhere else, including those who are LGBT or just figuring things out; homeless or living on the streets; struggling with substance use or abuse; sex workers; or living with HIV/AIDS.