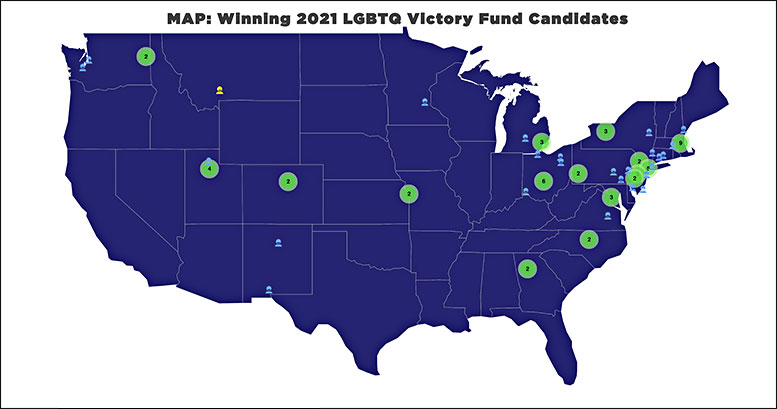 WASHINGTON—As of the latest LGBTQ+ voter count, and as ballots continue to be counted, 83 LGBTQ+ candidates endorsed by LGBTQ Victory Fund have won their races, and five remain undecided, out of the 131 that were on the ballot on Election Night. When these leaders take office, the number of out LGBTQ+ people serving in elected office will surpass 1000 for the first time. There are currently 997 out LGBTQ+ elected officials serving in the United States, but 53 incumbents were not running for reelection.

“LGBTQ candidates across the country had a very successful Election Night and when they take office, we will have more than 1000 out elected officials serving for the first time,” said Mayor Annise Parker, President & CEO of LGBTQ Victory Fund. “These victories for down-ballot candidates are critical because local officials are best-positioned to change hearts and minds – as well as policies and legislation. Although the national media spotlight is focused on politics in Washington, DC, it is state and local leaders like the ones who won on Election Night that most impact the daily lives of residents.

“While we shattered lavender ceilings in many cities and states, key losses for pro-equality candidates and the continued barrage of anti-LGBTQ bills must be a wake-up call for LGBTQ people and allies. The 2022 election cycle begins now and the anti-LGBTQ attacks and fights may be more brutal than ever. LGBTQ candidates could determine whether pro-equality majorities are maintained in Congress and in state legislatures throughout the country in 2022. Victory Fund is already at work on these races and we call on our community to join us.”

Below are key Election Night storylines:

America Will Have 1000+ Out LGBTQ Elected Officials Next Year

With last night’s LGBTQ candidate victories, the number of out LGBTQ elected officials serving nationwide will surpass 1000 for the first time. Currently, there are 997 out LGBTQ+ elected officials serving. Yet 53 incumbents were not running for reelection, making it unclear until the victories last night whether the 1000 threshold would be reached.

New York City Elects Most Out LGBTQ Councilmembers Ever

Six out LGBTQ candidates endorsed by the LGBTQ Victory Fund won their general election campaigns for the New York City Council, increasing the number of out representatives from four to six and ensuring LGBTQ+ representation on the council remains. It is the largest group of out LGBTQ+ councilmembers ever elected – the previous record being five. *

LGBTQ+ representation on the council was at risk going into Election Day, given all four currently serving out LGBTQ members were termed out.

* New York City Councilmember James Vacca came out in 2016 – making it six out LGBTQ+ councilmembers on the council – however, Vacca retired from the seat in 2017 and never won election as an out LGBTQ+ person.

Liliana Bakhtiari Poised to Be First LGBTQ Muslim Elected in Georgia and Only Non-Binary Person Serving on City Council of Major U.S. City

Liliana Bakhtiari is on track to win her election for the Atlanta City Council, becoming the first out LGBTQ+ Muslim ever elected in Georgia and the only out non-binary person serving on the city council of a top 50 U.S. city. As of yesterday, Liliana captured approximately 50 percent of the vote in a five-way race with all precincts reporting. However, the race has not been called and could go to a runoff if her vote count dips beneath 50 percent.

Other city council candidates of color making history include:

Additionally, Keisha Sean Waites’ race for Atlanta City Council will head to a runoff. She would be the first Black out LGBTQ woman elected to the council.

Dion Manley Is First Trans Person Elected in Ohio, And Other School Board Wins

Dion Manley won his election for the Gahanna Jefferson School Board, making him the first trans person elected in all of Ohio. There are currently just five trans men serving in elected office anywhere in the country. The victory is especially significant given efforts by anti-trans activists across the nation to target trans students at school board meetings and the surge in anti-trans bills introduced in state legislatures.

Danica Roem won reelection to the Virginia House of Delegates, ensuring she remains the longest-serving out trans state legislator in U.S. history. Despite running against an anti-LGBTQ opponent in a key swing district, Roem sent a series of persuasion mailers to likely voters that emphasized her work to pass LGBTQ+ legislation while in the state legislature. Delegate Dawn Adams also won reelection in a closely watched race in another swing district, defeating an anti-LGBTQ opponent, and Delegate Mark Sickles won reelection as well.

Roem previously faced two transphobic opponents. She defeated her 2017 opponent, Bob Marshall, a 25-year incumbent and self-described “chief homophobe” of the Virginia state legislature, to become the first out and seated trans state legislator in U.S. history. She then defeated another anti-trans opponent, Kelly Sweeney McGinn, by even larger margins in 2019.

LGBTQ Victory Fund works to achieve and sustain equality by increasing the number of openly LGBTQ elected officials at all levels of government while ensuring they reflect the diversity of those they serve.