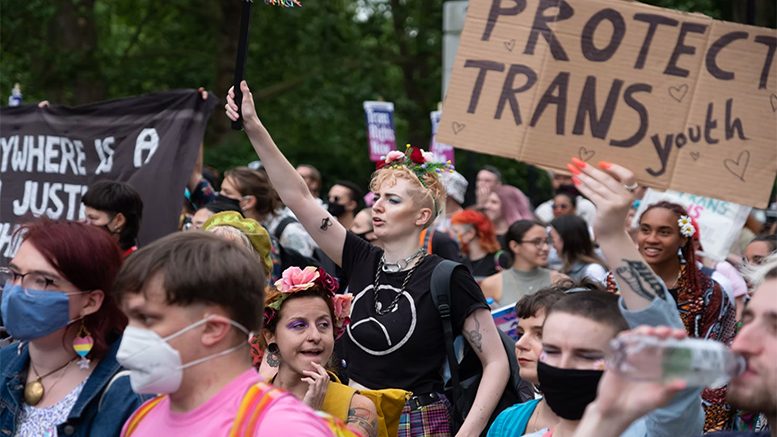 This year, during TDoR (November), 53 Trans People Have Been Murdered, Most of them Are People of Color

Each November 20, at TDoR observances nationwide, we mourn the lost lives of our trans and gender diverse community, who were brutally murdered by a system that has failed them. Unfortunately, 2021 was the deadliest year yet, especially for the most marginalized within this demographic: members of color belonging to this specific community. It is inexcusable and mind-blowing that as time marches on, as we become more aware of the discrimination, bias, and vitriol hurled at the trans community — including systemic barriers in place — that the direction of human rights and basic empathy and compassion toward the community continues to plummet. When you consider trans people of color, especially trans women of color, the statistics are even more staggering when compared to population size.

“The Transgender Day of Remembrance serves several purposes,” read the site, Remembering Our Dead. “It raises public awareness of hate crimes against transgender people, an action that current media doesn’t perform. Day of Remembrance publicly mourns and honors the lives of our brothers and sisters who might otherwise be forgotten. Through the vigil, we express love and respect for our people in the face of national indifference and hatred. TDOR reminds cisgender people that we are their sons, daughters, parents, friends, and lovers, and gives allies a chance to step forward with us and stand in vigil, memorializing those of us who’ve died by anti-transgender violence.”

According to the Trans Murder Project, the organization responsible for collecting worldwide data relating to trans violence and murder, there has been a 13 percent increase in fatal incidents over the last two years. This year, the United States reported 53 trans murders, double from just the year before. With more divisive policies and barbaric ideologies that have surged in the United States, particularly normalized in the Trump administration, it should not be a shocking finding. Since then, hate crimes have risen exponentially.

Some in Hollywood who have a large platform and access to millions on social media, are equally to blame as is the mainstream media itself — and any other media that perpetuate violence against those who cannot defend themselves. That is synonymous with any group that is being marginalized, not just trans and gender-diverse people.

Companies like Netflix and their intransigent support of comedian David Chappelle — with his ignorant, off the cuff remarks against trans people — publishing houses supporting writers like J.K. Rowling, social media like FB, Twitter, etc. allowing anti-trans or vitriolic comments against those who are most marginalized are the culprit of these acts and their normalization. Comedy or any form of “art” should not be sanctioned at the mercy of groups that are constantly being targeted and whose lives are at peril because “art” must be preserved. What about preserving someone’s life? It has been proven in models around the world, time and time again, that when people live a happy, authentic and affirming life, they thrive, perform better and we all benefit as a result.

The FBI reported a significant increase in crimes perpetrated by race, ethnicity, ancestry, and gender identity since 2019. Even so, due to longstanding bias against racial, ethnic groups and those who are trans, gender diverse and others belonging to the LGBTQ+ community, reported incidents are so low due to longstanding tensions between the police and members of disenfranchised groups, where there has been long-standing abuse by law enforcement. If you don’t believe the police are there to help a dire situation, why would anyone open themselves up to additional toxic or even deadly interactions? Many wouldn’t.

“This data is critical, but it doesn’t tell the whole story of anti-transgender violence,” Rodrigo Heng-Lehtinen, executive director of the National Center for Transgender Equality, said in an emailed statement to NBC News. “Many transgender people do not feel comfortable or safe reporting crime to the police. In fact, according to our U.S. Transgender Survey, more than half (57%) of respondents said they would feel uncomfortable asking the police for help if they needed it.”

This should not be particularly surprising. The Stonewall uprising, which paved the way to the modern-day LGBTQ+ rights so many enjoy was rooted in revolting against police brutality. Similarly, BLM (Black Lives Matter) was also born to counter police brutality. Immigrants, documented or otherwise, have been direct targets of law enforcement and been brutalized along the way. Women have been abused by the system repeatedly. Incidents occurring against marginalized groups are underreported in large part to a colossal systemic failure of protecting the most vulnerable to abuse by the very system that is supposed to be there to protect and serve.

I am not referring to one specific law enforcement official or individual, I am referring to the system in its entirety and how that system continues to perpetuate bias, hate, and brutalization. When the system fails repeatedly, how can you believe in it? If you happen to belong to a segment of the population that is comfortable seeking assistance from the police without any hesitation, you are privileged at the very least. Reform. Reform. Reform.

One of the worst things we can do as allies, supporters, friends, family, or even acquaintances of the trans and gender diverse community, in this case, is to dismiss anyone’s experience. If someone tells you they need help if someone tells you they are being abused, or targeted, or victimized, even by the system that is supposed to be there to protect and serve, believe them. Rarely, if ever, do we as people validate others’ experiences when we can’t see them directly. And, seldom do people see just how challenging the plight of others is without experiencing it themselves.

Over the past several years, I’ve worked to acknowledge where my own bias lie — bias that I didn’t realize I even had. I am, like countless others, at the very least, privileged. I am white and I am cisgender. As a woman and member of the LGBTQ+ community, I’ve experienced a pervasive level of discrimination, but I cannot say that I have experienced even a fraction of what Black and Brown folks have lived through in this country — a country that touts itself to be the land of the free. That very notion depends on who you ask. People belonging to racial and ethnic groups that I do not belong to are exactly the folks who this system is most rigged against. Trans women of color are still the most disproportionately slain people in this country. In the hearts and minds of others where there lies hate, those with intersectional identity become an even greater target. It is that hate that must be slain.

Without an air of arrogance and defensiveness, we have an obligation to get past ourselves enough to be able to examine just how different types of privilege in our own lives lead to an easier path. Just because your direct experience in “the system” hasn’t failed you, doesn’t mean it isn’t failing others. With intersectional identity, the issues and levels of oppression and discrimination become more rampant and complex. Wherever your own privilege lies — male privilege, white privilege, cisgender privilege, socioeconomic privilege, and so on — it is up to each one of us to dismantle it and reform the antiquated “system” that has always been a lemon.

*Nicole Lashomb is Editor-in-Chief of The Rainbow Times and Co-Executive Director of Project Out. She holds a BM from the esteemed Crane School of Music and an MBA from Marylhurst University. Nicole can be contacted here.