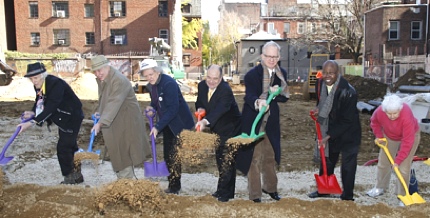 PHILADELPHIA, Pennsylvania – The dmhFund and Pennrose Properties broke ground today on the John C. Anderson Apartments, the nation’s first urban LGBT-friendly, low-income senior housing. John C. Anderson was a Philadelphia City Council member from 1979 until his death in 1983, and was instrumental in the passage of Philadelphia’s civil rights bill for sexual minority individuals. The building’s official name was unveiled at the ceremony by Philadelphia Mayor Michael A. Nutter, who credits Anderson as his mentor. Joining him at the proceedings were former Gov. Ed Rendell, Congressman Bob Brady and other local and state officials, as well as pioneers of the LGBT-civil rights movement, dating as far back as the 1950s.

Financing for the $19.5 million project was provided through a Philadelphia HOME grant, Pennsylvania Redevelopment Assistance Capital Programfunds, and Low-Income Housing Tax Credits. Pennrose Properties, one of the nation’s top 10 affordable housing developers, is overseeing the project.  WRT Design has been chosen as the architect and Domus Inc. as the general contractor.

The project is spearheaded by dmhFund president and well-known gay rights activist Mark Segal, who founded Gay Youth in 1970, the nation’s first organization to deal with gay teens and endangered LGBT youth issues. With other LGBT friendly senior housing projects struggling in cities across the country, Segal points out that this project is different.

“I’ve observed the challenging journeys of so many other LGBT senior housing developments and I knew the key to our success would have to be taking a different approach to funding by focusing outside the LGBT community, and going after the same money available to other communities for their low-income seniors,” said Segal, who pioneered local LGBT newspapers, including the Philadelphia Gay News, which he currently publishes.

“It’s heartening to know that local, state and federal officials from both sides of the aisle are understanding and supportive of our efforts to help our aging community members live out their golden years in comfort and dignity, without being forced back into the closet,” continued Segal. “With our numbers only continuing to rise, now is the perfect time.”

The need for services to the aging LGBT community is well documented. In 2005, the Mid-America Institute on Poverty found a significant demand for LGBT retirement communities, with nearly 65 percent of participants being interested in living in an affordable rental housing geared toward mature LGBT individuals and couples. The most reported reason for wanting to live in LGBT-senior rental housing was the prospect of living with people who had similar life experiences and views. Other reasons included acceptance, comfort, safety and an opportunity to meet people.

The creation of this senior residence in the “City of Brotherly Love and Sisterly Affection” is particularly fitting in that Philadelphia and Pennsylvania led the way in many gay civil rights achievements. The first gay rights march took place in front of Independence Hall in 1965, Pennsylvania was the first state to enact discrimination protection for sexual orientation in state employment in 1975 under Gov. Milton Shapp and Philadelphia was one of the first cities to pass anti-gay discrimination legislation in 1982.

A Home in the Heart of the Gayborhood
Located at 249 South 13th Street, in the heart of the Philadelphia Gayborhood, the six-story residence will have 56 one-bedroom units, each with oversized windows. The Energy Star 3.0 building features a vegetated green roof and solar thermal hot water system.  A 5,000 square-foot enclosed courtyard, designed to encourage active resident use, includes raised beds for senior-friendly community gardening.  Along with multi-purpose public spaces to be shared by residents and the larger community, there are also plans for nearly 2,000 square feet of rentable ground floor retail space with substantial frontage along 13th Street. The transformation of the space from a Redevelopment Authority garage into an attractive, well-lit residence adds to the ongoing revitalization of the 13th Street corridor. This location will allow residents to be an integral part of the community and take advantage of services offered by other LGBT resources in the neighborhood such as the William Way Community Center and the Mazzoni Center for health services. In addition, it provides easy access to all that Center City has to offer – public transportation, world-class shopping, dining, entertainment, and social/healthcare services all within walking distance.

Information on the process to apply for a unit in Philadelphia’s gay-friendly low income senior housing residence will be available on the dmhFund website in early 2013.

About dmhFund
Founded in 2004, the non-profit dmhFund was established to support programs that address concerns in the LGBT community that are overlooked by other traditional sources, including HIV/AIDS education, fighting prejudice, youth services, senior programs and housing, anti-discrimination and race relations within the community. The mission of the dmhFund is to translate the best of contemporary social and medical science into change that protects, enhances and saves lives.

About Pennrose Properties
With nearly 30 years of experience, Pennrose combines quality development and proven management to deliver exceptional lifestyle-centered living communities for its residents. Whether developing its own properties or working with outside partners to manage and maintain an existing property, Pennrose has the superior knowledge and unparalleled dedication to get the job done right. Pennrose operates both conventional and affordable communities throughout Pennsylvania, New Jersey, Ohio, Maryland, Alabama and Tennessee.