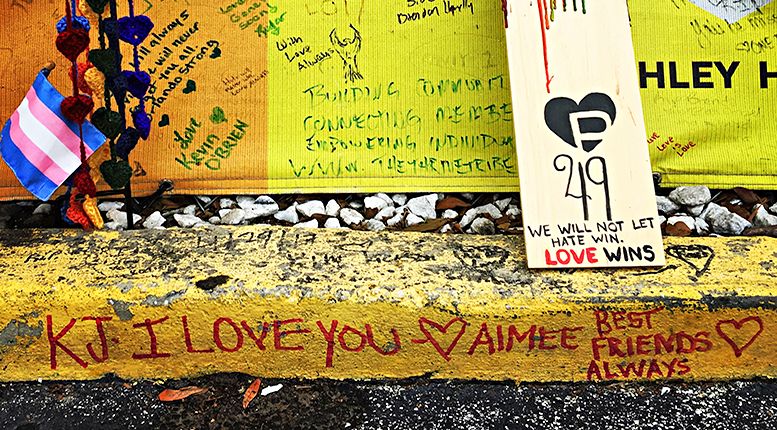 A photo of a memorial to the late KJ Morris
Photo: Aimee Fyfe

NORTHAMPTON—Friends of Kim “KJ” Morris, a longtime Drag King in western Massachusetts, would like her to be remembered not because she was killed in the Pulse Nightclub shooting, but because of her kindness, vitality, and enthusiasm for life.

To that end, a group has come together to raise money for a scholarship in Morris’ name, which will be administered through the Community Foundation of western Massachusetts (CFWM).

“I think right now, how people are remembering KJ is because of the fact that she was a victim of the Orlando tragedy,” said Aimee Fyfe of Palmer, Morris’ close friend of 15 years. “Doing something that will continue to give back shines a new light on the way that we can remember her, as someone who loved the arts, performance, painting, drawing, and basketball. These are things she really appreciated and would have loved to help someone else pursue. Those were her passions.”

Morris was a popular drag performer and dancer with strong ties to the LGBTQ community in western Massachusetts. She was working as a bouncer at Pulse Orlando, a gay nightclub, when Omar Mateen, 29, stormed the building and shot more than 100 people. Morris was among 49 people killed in the attack, considered the deadliest mass shooting by a single shooter in American history and the deadliest incidence of violence against the LGBTQ community. In addition to the fatalities, nearly 60 people were seriously wounded. Mateen was shot and killed by Orlando police officers during the three-hour standoff.

Morris was born in Torrington, Connecticut, and lived in the Pioneer Valley for more than a decade, including time spent as a performer and sometime bouncer at Diva’s, a former LGBTQ nightclub in Northampton where she adopted the stage name ‘Daddy K.’

She worked at various businesses in the area, including at car dealerships in sales; as a sales associate at H&M at the Holyoke Mall, alongside Fyfe; and as an events coordinator at local colleges, including Amherst and Smith Colleges.

“If you knew KJ in western Mass., you most likely knew her as ‘Daddy K’,” Fyfe said. “She had her own web page as ‘Daddy K’ and did a lot of drag shows at Diva’s, at the colleges, and at the Polo Nightclub in Connecticut. She loved doing drag. It gave her a world of confidence.”

Matthew Rist, a friend and coworker of Morris’ who met her dancing at Diva’s one night about 15 years ago, is one of the friends who launched the GoFundMe campaign; the two also worked together for a time. Rist said Morris was a great dancer and the two would meet, grab a bite to eat, talk, and go out dancing.

“She was always there for me, at any time,” Rist said. “If you just needed someone to talk to or hang out with, she was always there for those who needed her. We wanted to set up this scholarship fund to keep her memory alive in a way that supports people, which KJ was all about. Her smile just lit up a room.”

Through fundraisers, including an annual drag show, and a drive on GoFundMe, the group is working to raise money for the KJ Morris Memorial Scholarship Fund. Rist said Morris’ friends chose to work with CFWM to create the scholarship fund because the organization invests the donated money to keep the fund alive in perpetuity. The scholarship will be available eventually to college-bound students living in western Massachusetts.

Rist said between fundraising events and the GoFundMe drive, the group has raised $5,876 to open a scholarship fund through the CFWM. He said $25,000 must be raised within three years to fully fund a self-supporting scholarship.

Allie Thorpe, a longtime friend of Morris’ through her wife, Melissa Nahas, also is helping with the gofundme campaign and said the group is planning other possible events, such as a restaurant fundraiser and a basketball tournament. Thorpe said she spent many happy hours with Morris, going out dancing, walking their dogs, and playing cards. Morris threw her a bachelor party when she got married in July 2011.

“She was a very loving and caring person and was a pillar of support for me,” Thorpe said. “We confided in each other a lot. She was always there for me through whatever troubles I was having and I tried to be there for her. She had a big impact on my life.”

Thorpe said Morris was highly committed to her work as a drag performer and served as a mentor to younger drag kings coming up.

“She really enjoyed helping the younger performers learn the ropes and what music to collect and how to dress up and do their facial hair and perfect their moves,” Thorpe said. “Her performances were very important to her.”

Thorpe said organizers hoped to gear the memorial scholarship specifically to LGBTQ students, but learned through CFWM that they could not do that because it would be discriminatory in a general scholarship program that is open to all. She said the scholarship will include some language encouraging LGBTQ students to apply, however.

“KJ played a big role in the LGBTQ community of western Mass., particularly for the up and coming drag performers that she took under her wing,” Thorpe said. “Many of them looked to KJ as an inspiration.

“I think she would be humbled and proud of it,” she said. “She would have thought it was a great way to help people who have struggled, who have been a part of the LGBTQ community that she was such a big part of.”

After living in western Massachusetts, Morris relocated to Hawaii in 2015 and then, less than a year later, to Orlando, Florida, where she moved to help out her mother and grandmother. Thorpe said after she moved away, the two of them would often send each other funny “Just Because” cards that they found in stores to keep their friendship alive.

Fyfe said she first met Morris at Diva’s when she asked to buy her a drink.

“She hit on me, but I was in a relationship at the time,” Fyfe said with a laugh. “But we became friends and had been best friends ever since.”

Fyfe said Morris had a sociable, outgoing, self-confident, and charismatic outward persona as ‘Daddy K,’ but most people did not know the real KJ, whom, she said, was actually shy and reserved.

“People thought she was this happy, bubbly person 24-7, but she wasn’t,” Fyfe recalled. “She was a very caring friend who was there for all the major bumps in my life, from breakups to deaths in the family. I could call her at 3 a.m. and she would come right over.”

Fyfe said the two had a standing date every Wednesday night to watch TV shows, including America’s Top Model and American Idol.

“We would drink and order pizza and we looked at Wednesday nights as Aimee and KJ’s holiday, no matter what relationships we were in at the time,” Fyfe remembered. Fyfe said Morris loved her dog Shiloh, who had passed away earlier, and was obsessive about buying shoes.

Morris also loved painting and many of her friends have her artwork on their walls, Fyfe said. She loved basketball and played in local recreational leagues. While Morris moved away from the area, Fyfe said she “was a western Mass. girl” at heart and would have been honored to have a scholarship created in her name for local students who want to go to college.

“For her, leaving western Mass. was one of scariest decisions she had ever had to make, but she decided she needed to live life outside the box” Fyfe said.

The night that Morris departed for a job in Hawaii, she drove over to Fyfe’s house where her friend discovered she had all her clothes piled in the backseat of her car.

“I had to give her my suitcases so she could properly pack her clothes and not use trash bags!” Fyfe said, laughing.

“She went to Pulse, looking for gay people, like herself,” Fyfe said.

Morris was only on her third shift as a bouncer at Pulse Orlando when she was murdered in the shooting.

“Pulse was a horrible tragedy,” Thorpe said. “It’s not hard for those of us who were KJ’s friends to think about her and remember her. This scholarship is a way for us to remind the public that there were people affected by this directly, there were people taken from us who had such great potential. They were real people, with hopes, and dreams, and lives. This is a way for us to give back, in a way that KJ would have wanted.”

For more information about making a tax-deductible donation to the KJ Morris Memorial Scholarship Fund’s GoFundMe page or email Matthew Rist at kjmemorialscholarshipfund@gmail.com.