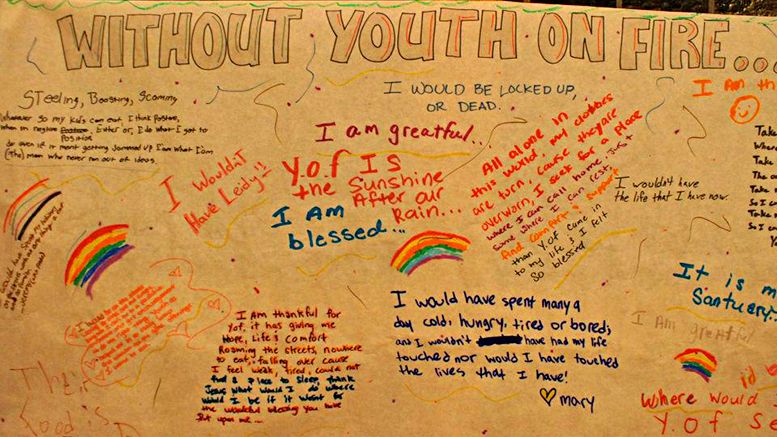 Earlier, LGBTQ+ youth created posters that told their story with and without Youth On Fire as a safe place and space to go to.
Photo: YOF FB Page

CAMBRIDGE—Facing budget troubles and an uncertain future, Youth On Fire (YOF)—a program which provides a safe space, valuable resources, and community for homeless youth—will close its doors this fall.

For program manager Mandy Lussier, where those homeless youth will go, among the multitude of tasks she takes on at the understaffed program, is always at the top of their mind.

“If we are not there to help them, I don’t know who will step in,” Lussier said.

In the 2017 Massachusetts fiscal budget, cuts to funding from the Department of Health for homeless and LGBTQ youth devastated YOF—Lussier said about 64 percent of the program’s funding was wiped out, a total shortfall of approximately $300,000.

That money is used to support homeless youth, either part of the LGBTQ community or not, in many ways. Hot meals, help filing paperwork for needed services, counseling, and even a partnership with the Y2Y Harvard Square Homeless Shelter, and numerous other services are offered to a population caught in a difficult position.

“There’s not a lot of organizations that work with homeless youth,” Lussier said. “If we’re not there, I don’t know where they’re going to go.”

For Lussier, it is about the people, which is what keeps her going.

For years, Sarah* was one of those youth you might see sleeping in a park in Cambridge, or in her classroom at Lesley University carrying all her earthly belongings.

As a homeless youth, Sarah’s story is the face of an incredibly complex issue. As a first generation American woman in an immigrant family, she found herself dealing with an intractable cultural conflict she needed to escape from.

Struggling with a heroin addiction as well, having Youth On Fire was, in many ways, a lifesaver. Through their services, Sarah was able to apply for housing and school, and receive support to help her with addiction.

Yet, sometimes it’s the small things that count.

“It’s hard to overemphasize how comforting it is to eat a hot meal after having only eaten from the trash, or on an EBT card where you can’t even buy hot meals,” she said. “And having someone cook for you is a real act of care, compassion, and love.”

Sarah, who is now 27, began visiting the program when she was 18 because another homeless friend said she could get a hot meal there. She came to find that so much more was available to her and stumbled upon the beginning of getting her life back together.

“It’s hard to understand the value of something like this but having somewhere to leave your stuff is incredibly important,” Sarah said. “Being able to be properly clothed to go to work is really challenging when you’re homeless.”

Dealing with homelessness, drug addiction, chronic depression, and anxiety, the complexity of Sarah’s case is common for those coming to YOF’s door.

It’s cases like this that Lussier sees every day.

“There’s so many homeless youth in Boston and they generally need all the basic human rights like food, water, and shelter,” Lussier said. “They also find themselves in unsafe situations. The folks I see are really complex.”

Having a safe, non- judgemental space as queer and pansexual meant Sarah was able to start establishing a community of friends who offered emotional support as well.

“I can’t overvalue the importance of the community around me,” Sarah said.

With her half-shaved head and eyes that have lived through so much, she can still glow with gratitude.

“I contribute everything to Youth On Fire, the fact that I had that support.”

Many homeless youth are caught up in dangerous and abusive relationships, which make safe spaces like Youth On Fire so important for them.

Maxine Brandeis, a 27-year-old bisexual woman, was in an abusive relationship. She said the haven Youth On Fire offered her meant the world. There was also something else that was particularly important.

“They allowed dogs which was one of the biggest things for me,” Brandeis said. “There were very few places in my life I could go. I could probably count them on my hand.”

Brandeis said she made several attempts to leave her partner, and each time the staff and community at Youth On Fire welcomed her with open arms.

“I tried to leave him so many times and they were always there for me,” Brandeis said. “The safety of their members is first and foremost.” 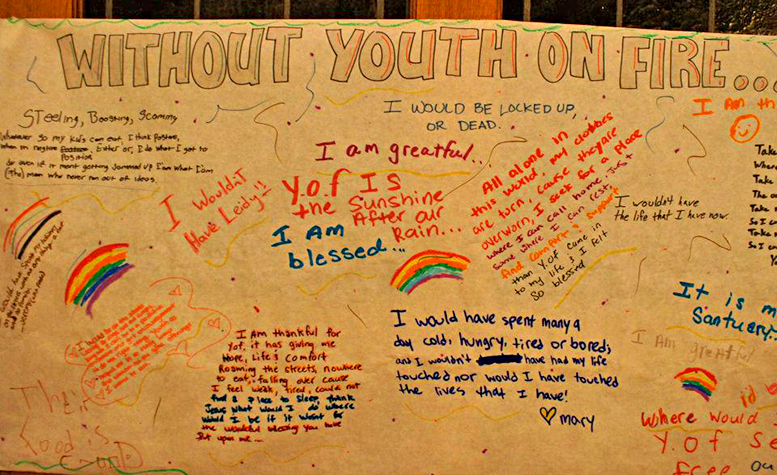 Earlier, LGBTQ+ youth created posters that told their story with and without Youth On Fire as a safe place and space to go to.
Photo: YOF FB Page

Brandeis also suffered from epilepsy, and harbored a general distrust of doctors. She said discriminatory diagnoses related to her homelessness and range of complex issues put her in an unsafe position.

Youth On Fire was able to help her in several ways in this regard.

“They gave me some sense of trust in doctors, and they gave me a lot of knowledge to know it was ok to not be able to do something because of a disability,” Brandeis said. “I learned how to ask for help. Not doing so got me into some really bad situations.”

With the support she received from Youth On Fire, Brandeis said she has become a stronger, more resilient person. Further still, the community she developed around her at the program gave her something that homelessness almost completely robbed her of: an identity.

“You’ll never be treated more invisible in your life. You’re like a piece of trash to them,” Brandeis said. “Eventually it was a community you had. It felt different; I never had that growing up.”

“I didn’t know what I was getting into,” said Ashton Roberts, who identifies as non-binary, about moving to Boston in 2010. “Growing up in Texas at that time as a queer person was really, really hard.”

Roberts’ partner had asked them to move to the area. With no stable housing lined up, they found themselves sleeping in a tent on the Charles River that winter.

“It was a huge wakeup call for me,” Roberts said, “I didn’t talk to my parents because I didn’t want them to know.”

While contending with this, Roberts said the partner they moved to Boston with was emotionally abusive. Coupled with a diagnosis of major depressive disorder and a growing drinking problem, Roberts said hopelessness began to close in.

“I had some moments when I felt I couldn’t do it anymore,” they said.

YOF assisted in giving Roberts a refuge from their abusive ex-partner, secured housing several times for them, and helped them sign up for health insurance.

Yet one of the most important services, Roberts said, was a place to rest their nerves.

“You could go there to zone out, to relax, to get away from everything for a minute,” Roberts said.

Since then, Roberts has moved back to Texas and is in a loving relationship with secure housing. While still having different kinds of struggles, Roberts said the skills and more positive outlook gained from the program lives on today in them.

When reflecting on the fact Youth On Fire could close down, their voice became tinged with emotion. Homeless youth are in peril, Roberts said, without a program like Youth On Fire.

Lussier put bluntly the plight of homeless youth in Boston.

“[Homeless youth] are not going anywhere, and they should be valued like anyone else,” Lussier said. “They may not have homes, but they are a part of the community.”

Lussier said staff are advocating to Governor Charlie Baker all the time to secure sustainable funding. Through a recent social media campaign Youth On Fire was able to raise $50,000, an amount that will keep them open for the next few months.

Youth On Fire is what Lussier describes as a “low-threshold” program, so in cases of youth on the younger side of the spectrum—they serve youth beginning at age 14—common barriers like a lack of official identification mean they can reach more people.

Those people who are benefiting from the work at Youth On Fire, Lussier said, could be anywhere. With the future of the organization under threat, it’s difficult to tell how many people would be affected.

“These are the folks who might be your barista, or your classmate at UMass,” Lussier said. “Turning your back on them just seems criminal. This would be taking a huge step backwards.”

If you are interested in running a campaign or donating to Youth On Fire, or helping out in other ways, visit their website at https://goo.gl/GBHSZ2.

*Sarah’s real name was not used to protect her identity.