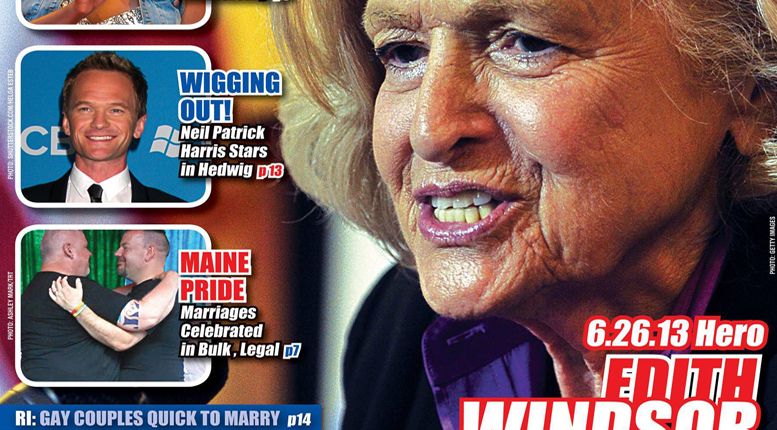 The matriarch of marriage equality, Edith Windsor, has died today at age 88.

“I lost my beloved spouse Edie, and the world lost a tiny but tough as nails fighter for freedom, justice and equality,” saidJudith Kasen-Windsor via a statement. “Edie was the light of my life. She will always be the light for the LGBTQ community which she loved so much and which loved her right back.”

Windsor, whose landmark Supreme Court case struck down the Defense of Marriage Act (DOMA) in June, 2013 and granted same-sex married couples federal recognition for the first time and rights to countless federal benefits, died Tuesday in Manhattan, according to the New York Times.

Windsor’s attorney and long-time friend spoke highly of her client.

“Representing Edie Windsor was and will always be the greatest honor of my life. She will go down in the history books as a true American hero,” said Roberta (“Robbie”) Kaplan, Edie Windsor’s attorney. “With Edie’s passing, I lost not only a treasured client, but a member of my family. I know that Edie’s memory will always be a blessing to Rachel, myself, and Jacob. I also know that her memory will be a blessing not only to every LGBT person on this planet, but to all who believe in the concept of b’tzelem elohim, or equal dignity for all.”

The well-known activist’s death was confirmed by her wife, Judith Kasen-Windsor.

A public memorial will be held Friday, September 15 at Riverside Memorial Chapel at 12:30 p.m. In lieu of flowers, Edie Windsor had requested that any donations in her memory be made to the following organizations:

Statement from President Obama on the Passing of Edith Windsor

America’s long journey towards equality has been guided by countless small acts of persistence, and fueled by the stubborn willingness of quiet heroes to speak out for what’s right.

Few were as small in stature as Edie Windsor – and few made as big a difference to America.

I had the privilege to speak with Edie a few days ago, and to tell her one more time what a difference she made to this country we love. She was engaged to her partner, Thea, for forty years. After a wedding in Canada, they were married for less than two. But federal law didn’t recognize a marriage like theirs as valid – which meant that they were denied certain federal rights and benefits that other married couples enjoyed. And when Thea passed away, Edie spoke up – not for special treatment, but for equal treatment – so that other legally married same-sex couples could enjoy the same federal rights and benefits as anyone else.

In my second inaugural address, I said that if we are truly created equal, then surely the love we commit to one another must be equal as well. And because people like Edie stood up, my administration stopped defending the so-called Defense of Marriage Act in the courts. The day that the Supreme Court issued its 2013 ruling in United States v. Windsor was a great day for Edie, and a great day for America – a victory for human decency, equality, freedom, and justice. And I called Edie that day to congratulate her.

Two years later, to the day, we took another step forward on our journey as the Supreme Court recognized a Constitutional guarantee of marriage equality. It was a victory for families, and for the principle that all of us should be treated equally, regardless of who we are or who we love.

I thought about Edie that day. I thought about all the millions of quiet heroes across the decades whose countless small acts of courage slowly made an entire country realize that love is love – and who, in the process, made us all more free. They deserve our gratitude. And so does Edie.

Michelle and I offer our condolences to her wife, Judith, and to all who loved and looked up to Edie Windsor.

Reactions from Organizations and Leaders

“We are deeply saddened by the loss of Edie Windsor, a hero and icon for the LGBT rights movement. Many of us feel the personal loss of a tremendous friend and mentor, whom we will never forget. She fought for dignity and laid the foundation for marriage equality. Her legacy will live on in history and be felt in the lives of our community for many years to come.”

“Edie was a true warrior for love and justice, and she lived life with an irrepressible joy. By generously and fearlessly sharing the story of her 40+ year love for Thea Spyer, she helped the nation and the Supreme Court see the humanity in the relationships of same-sex couples. In refusing to accept anything less than full legal respect of their marriage, she changed the lives of many.

“We can honor Edie’s legacy by continuing the fight for equality, and by living life to the fullest, as she always did. All of us at GLAD are deeply saddened to hear of the passing of Edie Windsor. We extend our deepest condolences to her surviving spouse, Judith Kasen-Windsor, and to their community of family and friends.”