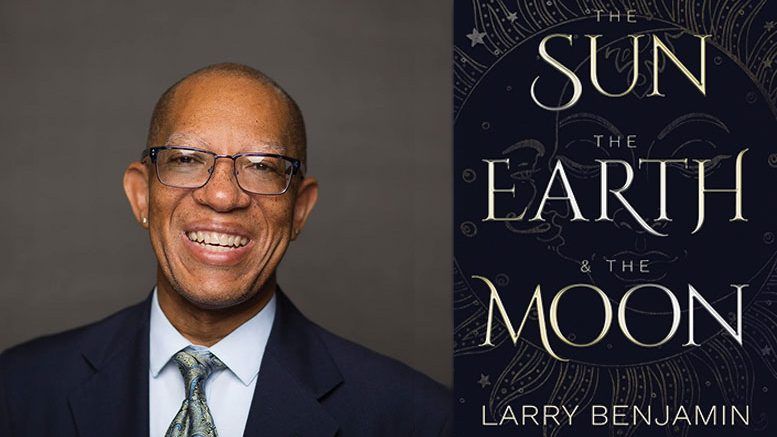 BTP released The Sun, The Earth & the Moon by Larry Benjamin late last year. This is Benjamin’s third novel published by the publishing house. It was originally available under the title “What Binds Us,” in electronic format in 2012 under the Carina Press imprint of Harlequin Enterprises.

Set primarily in Philadelphia, the novel “is the story of Thomas, an African-American 17-year-old boy eager to begin college at Penn and escape the heterosexual pantomime forced on him by his parents,” read a review of it by the Philadelphia Gay News.

“I’m especially excited to see this novel, which I first wrote 24 years ago, come to life again,” said Benjamin. “Originally, I wrote it in response to the movie Philadelphia, which I thought—despite its acclaim—didn’t do a good job portraying a gay relationship.”

With this iteration, Benjamin is out to show that there is life and love outside of AIDS, contrary to the way it was portrayed in the movie.

“The main character [in Philadelphia] was a victim and only a victim,” he explained. “He, in a way, became AIDS. We had no idea who he was outside of his diagnosis. So, I wanted to write a gay love story against the backdrop of the AIDS crisis but I didn’t want it to be full of angst—I often joke that the book is Brokeback Mountain without the angst and poverty.”

Regardless of the time when Benjamin first wrote the story—almost 25 years ago—its importance lies in its eternal appeal to lives, while paying tribute to loved ones, something that transcends any era.

“I think while the very nature of HIV has changed in the time since I first penned the story, it is still relevant,” Benjamin said. “It is for me is a marker in the sands of time, and an homage to all the men and boys we lost too soon. It also celebrates chosen family and the role we, as gay men, can play in each other’s lives to support, nurture and love one another. That I hope will make this story timeless for readers.”

While the palatial mansions and lavish parties bring to mind “The Great Gatsby,” Thomas appears to be more from “The Catcher in the Rye,” as a better adjusted, less blind Holden Caulfield. One scene in particular, where Dondi’s father strokes Thomas’ hair, echoes a moment from the Salinger novel between Caulfield and his teacher, with a similar homoeroticism and far more tenderness …

Benjamin’s novel, for all the highs and lows forced on the characters, is an enjoyable, easy read. The prose is clean and direct. The scenes begin and end at the right moments. Readers aren’t forced to wade in sentimentality. Benjamin knows when to focus on the minute details and when to zoom out for a broader perspective. And although the narration is from the adult Thomas’ view, he has the experience and hindsight to give us only what matters to his story and nothing else. We’re free to journey with him from Philadelphia to Rhode Island, from Dondi to Matthew, from a naïve boy to a man who finds the courage to love. It’s a worthwhile trip.” —Jason Villemez, Philadelphia Gay News

About The Sun, The Earth & The Moon

It’s 1977. Thomas-Edward is a 17-year-old freshman at the University of Pennsylvania when he meets the charismatic Dondi whose personality is as outsized and obliterating as his wealth. The two begin a passionate love affair. When it ends abruptly, Thomas is devastated. To make up for breaking his heart Dondi invites him to spend the summer at his family’s mansion by the sea. There he meets Matthew, Dondi’s younger brother, who he finds as mysterious as a dark corner or the far side of the moon. As the summer progresses, Thomas discovers that it is sometimes in an ending that we find our beginning.

Over the next decade, the three young men push the limits of love, acceptance, and friendship, while traversing a world increasingly ravaged by the onset of the AIDS crisis, which changes their lives in unexpected ways.

Conceptually, Bronx-born wordsmith Larry Benjamin sees writing as a way to create art from found objects. And while his “art” is expressed in words, that art is assembled from his lived experience and everything around him—snatches of conversation, people he’s met, houses and cars and objects he’s seen.

Benjamin’s semi-autobiographical, Unbroken, was a 2014 Lambda Literary finalist, an IPPY (Independent Publishers Book Award) Gold medalist, and a 2014 Rainbow Award finalist in the gay contemporary fiction category. He is also the author of the novel In His Eyes (2017), Damaged Angels, a collection of short stories, and the allegorical Vampire novella Vampire Rising.

In addition, Benjamin is the Communications Director for Philadelphia’s Mazzoni Center, the region’s largest of comprehensive health and wellness services in an LGBTQ-focused environment.

He has lived in the city’s East Falls section with his husband and two dogs for 20 years. He is at work on his fourth novel expected to be released Fall 2020. The author, Larry Benjamin, may be contacted directly at larry.benjamin.writer@gmail.com or via LarryBenjamin.com. View the book’s trailer: https://www.youtube.com/watch?v=ySi5kSNW_L8