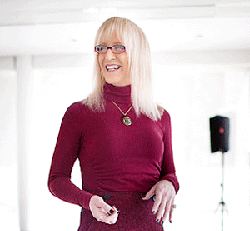 “As I look back, it seems as though my entire life has been preparing me for this particular moment because it is right in the center of my calling, my history, my identity, and my passion,” she said in an October 24 YouTube video.

Robinson, 42, is married to her wife Danyelle and the couple has four children. She is believed to be the first transgender person to head a national LGBT organization that is not transgender specific. Robinson began her new duties on October 25.

Her selection to lead OutServe-SLDN comes just as the boards of directors of the nation’s two foremost LGBT military groups formally voted in Orlando, Florida, last weekend to join forces, including a merger of their respective boards.

The new team’s senior partner is Servicemembers Legal Defense Network. Founded in 1993 in the wake of “Don’t Ask, Don’t Tell,” SLDN provided free, confidential, and direct legal services to LGBT service members and veterans affected by the now-defunct ban on open gay and lesbian service. Over the years the organization has assisted more than 12,000 individuals while becoming a key player in the fight to repeal DADT, which took effect a year ago.

Only two years old, OutServe is the team’s junior partner. And yet the association, which emerged in the summer of 2010 through social media, such as Facebook, as an underground network of LGBT active duty service members, now claims more than 6,000 members and 50-plus chapters worldwide.

As a combined organization OutServe-SLDN has its work cut out. DADT repeal took effect at the stroke of midnight, September 19, 2011, lifting the ban on openly gay, lesbian, and bisexual service. Transgender military service is still prohibited.

Other disparities result from the 1996 Defense of Marriage Act, or DOMA, which prohibits federal recognition of same-sex marriage.

Consequently, LGB service members who are legally married in same-sex unions are denied more than 1,000 marriage-related benefits at the federal level, as well as some military benefits and support afforded to opposite-sex couples and their families.

In October 2011 on behalf of seven, same-sex, legally married military couples, SLDN filed suit in federal court challenging DOMA and other federal laws that prevent the military from providing equal protection, benefits, and support to all service members and their families

Robinson said that among her top priorities would be the fight for full equality for all.

“The repeal of ‘Don’t Ask, Don’t Tell’ taught us that to be victorious, we must fight inequality on multiple fronts – in the courts, on Capitol Hill, and in the public square,” she said.

“We cannot stop until we reach the day when qualified Americans who wish to wear the uniform or our armed forces have the opportunity to do so with honor and integrity – and without fear of harassment – whether they are gay, lesbian, bisexual or transgender,” she said.

To that end, Robinson told BuzzFreed that two other priorities for OutServe-SLDN include adding sexual orientation and gender identity to the military’s non-discrimination policy and removing the stigma of less-than-honorable discharges for veterans dismissed under DADT.

Robinson comes to her new leadership role at OutServe-SLDN from the Human Rights Campaign. There, she served as deputy director of learning and development for the HRC Foundation’s Workplace Project, which provides curricula and training aimed at corporate leadership and employee audiences to improve LGBT cultural competence and inclusion on the job.

“A decorated military officer,” he added, “makes her uniquely qualified.”

“The LGBT-rights movement is made stronger by the inspired appointment of Robinson as the head of a critically important organization,” said Griffin.

Sue Fulton, executive director of Knights Out, an organization of West Point alumni, staff, and faculty, voiced praise for the selection of Robinson.

“We have a lot of work ahead of us at OutServe-SLDN, and we need a strategic, smart, dynamic leader who is strong both inside and outside the Beltway,” she said in a statement. “Allyson fits the bill perfectly. She understands the importance of faith and family, especially within the LGBT and military communities, and will be able to get things done.”

A native of Scranton, Pennsylvania, Robinson is a former pastor in Christian ministry, having earned a master of divinity degree in social justice theology from Baylor University.

Transgender activist and blogger Autumn Sandeen, a retired Navy veteran based in San Diego, could not be happier with Robinson’s appointment.

“It’s clear to me that in selecting Allyson Robinson as their new executive director OutServe-SLDN chose someone based on her qualifications and competence instead of sexual orientation or gender identity,” Sandeen said in email correspondence. “That selection speaks volumes about the integrity of the organization’s board.

“If there were any doubt about OutServe-SLDN’s commitment to open military service for qualified transgender people, the selection of a transgender, military veteran as the organization’s new executive director should put all questions about that full commitment to rest,” added Sandeen.

“Allyson is the right choice to lead OutServe-SLDN as she brings her experience of having served in the Army and an understanding of what our LGBT military personnel and veterans are still dealing with in a post ‘Don’t Ask Don’t Tell’ time,” he said. “This is also a giant step forward for the transgender movement as there are so few transgender people in leadership of either state and/or national advocacy organizations, which also reflects in lack of priority and resources devoted to issues transgender people face across the country.

“I am hopeful that Allyson will make headway in removing the barriers for our transgender men and women to serve openly in the military and for transgender specific medical care to be provided to transgender veterans who have served our country,” he added.