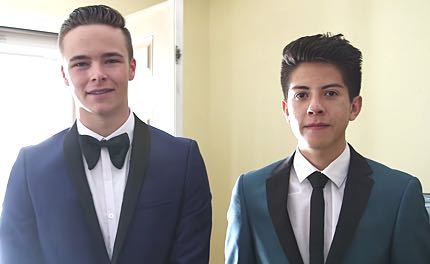 A great friendship and a grand understanding of sexual orientation were key to prom night success for a straight junior student and a gay student at Desert Oasis High School in Las Vegas.

Jacob Lescenski wasn’t able to find a date for his prom. His gay friend, Anthony Martinez, didn’t have a date for prom either.

The whole thing gave Lescenski an idea that was not only going to go viral, but one that has made him a hero in the eyes of many. Lescenski, according to KTLA5.com, told CNN he came up with an idea and a clever rhyme that’s now gone viral.

Ingenuously, Lescenski with other friends’ help and in the middle of the hallway, he popped the question to Martinez via a banner, which read “You’re hella gay, I’m hella str8, but you’re like my brother, so be my d8?”

“I couldn’t believe it at first” Martinez said of what happened,” Martinez told Ellen DeGeneres at the Ellen show tday. “… then I see Jacob with his [arms] right opened and I said ‘That’s for me.'”

Via Ellen.com, Lescenski said he knew Martinez was gay and that someone told him Martinez had a crush on him. Ellen said to Lescenski, “I have a crush on you and I’m gay too!”

Martinez was happy. He told CNN that Jacob had “made a huge change in the world somehow.” He emphasized that their city council group was about just that.

Twitter started to receive tweets filled with comments from celebrities (Miley Cyrus) and other gay teens filled with hope. And there was a happy ending for these gay and straight teens with the hope that others were watching and listening to the real message they sent the world.

After a crummy morning… this video brought a HUGE smile to my face! Thanks @JacobLescenskii & @anthonyseXC! https://t.co/geJlCS3PXF