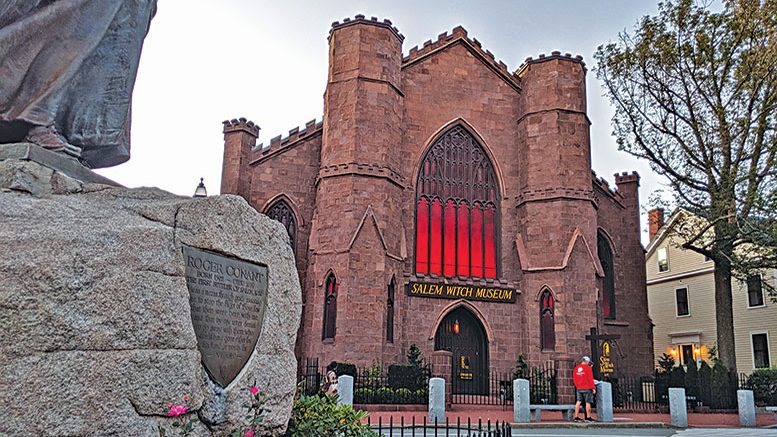 With foliage in full splendor, crowds more manageable than in summer, and the air generally crisp but not frigid, autumn—and particularly October—might just be the most enchanting time to travel through coastal New England.

Here’s a look at two of the region’s most alluring and LGBTQ-welcoming ocean getaways: Maine’s Mid-Coast region, which is perfect if you love tranquil small towns and gorgeous natural scenery, and Massachusetts’ North Shore, a spirited October getaway in part because of Salem’s fervent embrace of Halloween camp and spookiness, and because the bustling coastal towns of Cape Ann offer colonial charm and spectacular maritime scenery within an easy drive of Boston.

Settled in the early 1620s, Cape Ann and the small city of Salem contain a trove of fascinating historical sites, but this scenic stretch of coastline that extends north from Boston to the New Hampshire border also abounds with stunning beaches and verdant woodlands, and a string of charming towns in which old-time storefronts have been converted into lively restaurants, indie boutiques, and bric-a-brac-filled antique shops, and where imposing sea captain’s houses now offer overnight bed-and-breakfast accommodations. As you venture around Cape Ann (capeannvacations.com), you’ll find a pleasing mix of historic sites and wildlife-rich nature preserves—must-sees include the Essex Shipbuilding Museum, Rocky Neck Art Colony, and Halibut Point State Park.

In Essex, which is famous as the home of the fried clam, tucking into a plate of fresh seafood is de rigueur—good bets include the handsome Boat House Grille and casual Essex Seafood, which is also a market. Favorite picks for tasty breakfasts include the cozy Red Skiff in Rockport and Sugar Magnolia’s, which is set along downtown Gloucester’s lively Main Street. Later in the day, relax with a glass of wine and a romantic dinner at the Market Restaurant in Ipswich, with its sweet water views, or dapper Duckworth’s Bistrot in Gloucester. Or—just steps from Front Beach in Rockport, consider Feather & Wedge—which turns out well-crafted, globally inspired contemporary fare, both for dinner and Sunday jazz brunch. 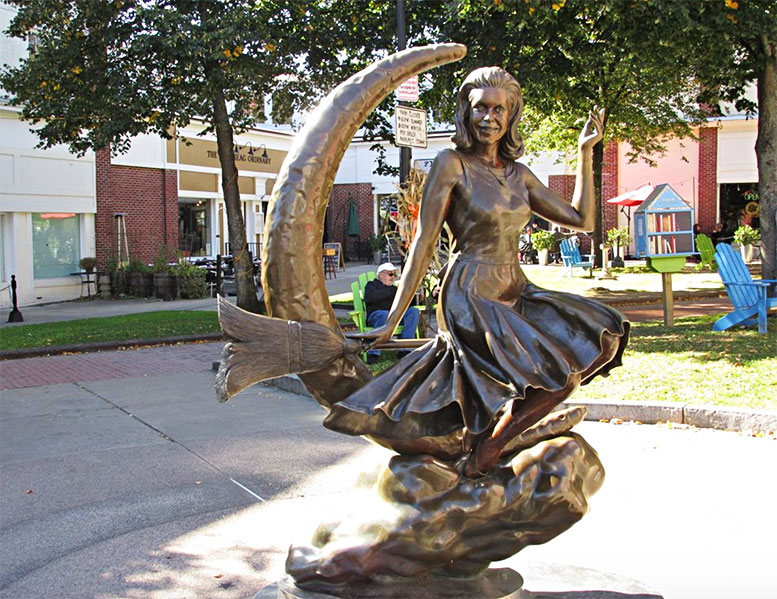 There are enough compelling diversions in Salem (salem.org) to keep you busy for days, from campy oddities—the Bewitched statue of Elizabeth Montgomery as Samantha Stevens, Count Orlok’s Nightmare Gallery of cinematic monster memorabilia, the Omen: Psychic Parlor & Witchcraft Emporium—to fascinating historic attractions, including the Salem Maritime National Historic Site, the House of the Seven Gables, and the world-renowned Salem Witch Museum. Downtown Salem has dozens of inviting restaurants, including sophisticated Stella’s Restaurant and Wine Bar and healthful Organic Garden Vegetarian. Artsy Front Street Coffeehouse is a cheerful stop for a latte, while Little Depot Diner—set in a 1920s rail car in nearby Peabody—is a favorite for filling breakfast fare. For socializing and decent pub fare, both Brodie’s Seaport and the Derby are convivial spots, and both have been event venues during the area’s North Shore Gay Pride celebration each June. For stellar craft beer, head to Notch Brewery.

October—billed in these parts as the Annual Salem Haunted Happenings—is an especially intriguing time to visit this city so closely associated with witches and the macabre, and the energy heightens to a fever pitch around Halloween. Popular events include haunted house and ghost tours and lively street fairs. Mahi Cruises offers a number of excursions from downtown Salem’s Pickering Wharf, including October Lighthouse and Fall Foliage trips and Haunted Happenings adventures.

One of the most alluring accommodations in the area, the grand Hawthorne Hotel (hawthornehotel.com) is steps from Salem’s museums and contains 93 rooms with classic Colonial-style furnishings and inviting public spaces—there are also two excellent restaurants on-site. It’s a perfect gay-date destination, whether for dinner or overnight. Also offering attractive rooms and a warm welcome, Northey Street House B&B (northeystreethouse.com) occupies a grand 1809 Federal Colonial mansion with three spacious, individually designed guest suites. Out on Cape Ann, the elegant, the Inn at Babson Court (babsoncourt.com) in Gloucester makes for a romantic hideaway, its two grand suites offering impressive views of the harbor—it’s a short walk from local restaurants. In Rockport, consider the Sally Webster Inn (sallywebster.com), which has six rooms furnished warmly with period antiques and is a quick and easy stroll from the water. Chef-owner Sawsan Galal prepares inspired full breakfast each morning and offers private cooking classes.

The rugged and rocky shoreline of Maine’s Mid-Coast (mainesmidcoast.com) is rife with scenic seafaring hamlets and bustling working waterfronts, not to mention some of the prettiest beaches in the state—Popham Beach is especially scenic, while the Giant’s Stairs Trail in Harpswell offers some of the most dramatic ocean views. Tiny Boothbay Harbor (boothbayharbor.com) is one of the region’s most endearing little villages. It’s chock-full of shops and eateries—if you’re looking for the perfect lobster roll, make a beeline to cute and casual Shannon’s Unshelled. For a more substantial dinner, you can’t go wrong with Brady’s, a year-round establishment overlooking the water and serving elevated pub fare. Discerning beer lovers should check out Boothbay Craft Brewery, which has developed a cult following for its Thirsty Botanist IPA. It’s also a perfect base for visiting the spectacular Coastal Maine Botanical Gardens, a nearly 300-acre swath of both magnificent formal gardens abloom with native plants and rugged coastal forest.

As you continue up the coast along U.S. 1—through the picturesque towns of Belfast, Bucksport (stop to explore and admire the view at Fort Knox and Penobscot Narrows Observatory), and Ellsworth—a right turn on Hwy. 3 leads to 108-square-mile Mt. Desert Island, where you can soak up the breathtaking scenery of Acadia National Park and the dapper Victorian resort town of Bar Harbor (visitbarharbor.com).

Home to the highest point on the Eastern seaboard, 1,530-foot Cadillac Mountain, Mt. Desert Island has long captured the imagination of travelers and is a stunning destination in October when the leaves burst with color. Much of the island encompasses Acadia National Park, a nearly 50,000-acre tract of ravishing viewpoints, undeveloped beaches, and vertiginous hikes, including the short but adrenaline-rush-inducing Beehive Trail and the vigorous climb to Dorr Mountain (a less-crowded alternative to Cadillac Mountain, which you can summit by car). Speaking of avoiding crowds, some of the best scenery in the park is in its quieter western half—head to the Beech Mountain Trail parking area, and you’ll access some of the park’s most rewarding and least trod trails. Finish your day of exploring the park with dinner in tony Bar Harbor, a handsome little burg that almost begs for an autumn-evening stroll. Havana and Lompoc Cafe are both terrific restaurants that serve creative small-plates-driven international fare, while Mount Desert Island Ice Cream serves some of the state’s tastiest artisan ice cream, with interesting flavors like cinnamon-cardamom and butterscotch-miso. All three of these establishments are supporters of Bar Harbor’s annual Pride event in late June.

Rockland’s LimeRock Inn (limerockinn.com), owned by friendly couple Frank Isganitis and PJ Walter, occupies a glorious Queen Anne house within a short walk of the town’s many restaurants and boutiques. Camden has a number of stately colonial B&Bs, including two gay-owned properties, the Elms of Camden (elmsofcamden.com) and Camden Windward House (windwardhouse.com). Another terrific option is the retro-hip Towne Motel (camdenmotel.com), which offers 17 reasonably priced rooms, including one pet-friendly studio. Gracious hosts Katja Hawlitschka and Siobhan Kelly create a warm and welcoming environment.

A 3-mile drive from Acadia National Park, the newly revamped Bar Harbor Inn & Spa (barharborinn.com) is the island’s venerable grande dame. It sits on a bluff with sweeping views of Mt. Desert Narrows and Frenchman Bay, and its rooms come in a variety of configurations, including ultra-plush two-story loft suites with harbor views. Amenities include an infinity pool, full-service spa, and waterfront restaurant that serves some of the best seafood in town. The hotel’s sister property, the Victorian-style Bar Harbor Grand Hotel (barharborgrand.com) offers spacious, light-filled rooms with a central location in the middle of this bustling town. A good base for exploring the western side of Acadia National Park, the gay-owned Harbour Cottage Inn (harbourcottageinn.com) is on a quieter, more remote side of Mt. Desert Island—it’s ideal for an utterly relaxing getaway.