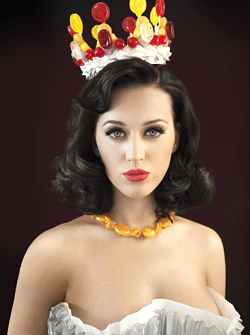 Not exactly last Friday night, but it still happened: Katy Perry called us from London, where it was nearly 1 a.m. If life really does imitate art, she smelled like a mini-bar on a night that’s soon to be a blacked-out blur, right?

“Not tonight,” she insists. “I have to play and be professional tomorrow, but maybe after the show I’ll be having a couple of Shirley Temples with some adult juice in them.”

We spoke with Perry just after she made a surprise appearance in London for a screening of her new film, Katy Perry: Part of Me 3D, a docu-concert chronicling the California girl’s evolution from gospel-singing daughter of two pastors to international pop phenom … with the most lethal boobs in the world.

During our interview, Perry told us what else they shoot besides whipped cream, how the gay community can relate to her movie and why Madonna doesn’t scare her.

Chris Azzopardi: You go from pretending to kiss girls to wanting to have sex with girls, recently joking during a radio interview that you’d like to do Rihanna. What’s up with all this faux lesbianism?

Katy Perry: You know, everybody’s been asking me about the duet with Rihanna and when it’s going to happen. I get that question every time I get interviewed. Obviously, we really want to do it and we want to do it in a big way, naturally; this (journalist) was doing this rapid fire of inappropriate questions of sexual things, and I just decided to throw her a curve ball. I do not discriminate against any beauty no matter what form it comes in, and Rihanna is gorgeous. I think that everybody would tap it if they could.

Q: Have you ever kissed a gay boy and liked it?

A: Yes, I have. It’s so funny. This boy I pseudo dated in high school, a fantastic flamenco dancer, was in Fiddler on the Roof with me and we were dating during the production, and I had just a tiny part but I was his first kiss. Cut to 10 years later, or even more, and we’re out at this place called Rasputin, this incredible gay club in Hollywood, and come to find out, he’s making out with my stylist. He’s still in it to win it, and he’s just become a part of our crew.

Q: You’ve been hanging out with your gay friends in West Hollywood a lot lately. What’s been your most memorable gay night out?

A: I don’t really decipher it as gay night or straight night; it’s the same night continually. I came from a really interesting perspective – interesting being the keyword, because it was obviously very suppressing and sheltering. I was set to think that gay people were an abomination, so I was not allowed to speak to anyone who was obviously fabulous and I was never allowed to associate with that type of people. Really, generally, I was never allowed to associate with anybody that wasn’t Christian. So I was kind of trapped in a bubble, and then it finally burst years later. Now I think that 90 percent of everyone I work with, from my assistant to two out of three of my managers, is either gay or lesbian. It’s been an incredible journey of acceptance and tolerance.

Q: Where are your parents now on gay people?

A: My parents have actually become more accepting and tolerant now. We’ve all grown up and evolved and broadened our mindset. Sometimes people have a really picky way of eating, right? And they don’t like certain foods, but a lot of times they haven’t even tried those foods. Once they try or know or get educated and have the facts, they’re more comfortable and there’s no judgment on your shrimp cocktail. I know that sounds so strange, but it’s this simple thing. A lot of people just aren’t educated; they still have this 1950s mindset, unfortunately.

Q: Are you saying that you’ve tried the shrimp cocktail and gone lesbian?

A: I don’t know if it would be appropriate for me to tell you what my straight or gay (experiences) have been in the past. (Laughs)

Q: You’ve said Madonna had a lot of influence on this film, and her 1991 documentary Truth or Dare really resonated with the gay community.

A: Yes, and still continues to.

Q: Do you think Katy Perry: Part of Me 3D will have a similar effect on the gay community?

Q: After what happened with Gaga – where Madonna mashed up “Born This Way” with “Express Yourself” for her upcoming tour and called Gaga “reductive” – are you scared of being too inspired by Madonna?

A: No. I’m inspired by everyone. And you know, I think that the queens love a little cat fight every once in a while. It’s good for the cocktails and the conversation, I’ll tell you that.

Q: “Ur So Gay” and “I Kissed a Girl” didn’t sit well with some of the gay community when they came out. You obviously have a huge gay following now, but did you feel like you needed to prove your authenticity after all the uproar over those songs?

A: I never really try and try hard. I like things to roll out naturally. People like to put me in a box. From the first official single, “I Kissed a Girl,” they always said I was a one-trick pony, and I’ve always known what I was gonna do next in my play-by-play and how I was gonna roll out the moments – and “I Kissed a Girl” was the strongest song for me at the time.

It was also on the tip of everybody’s tongue pop culturally, even on television shows like Gossip Girl people were talking about it, and it was becoming more of an accepted idea to be bi-curious and to be bisexual. The song just took it over the edge for the public in some ways, but I think that anybody who saw a confusing message in those songs was either looking for a fight or taking it completely out of context. Anyone that really understood the songs understood the songs for what they were.

Q: Now that more gay couples are able to legally marry, what would you tell them about marriage from your own experience?

A: It’s everybody’s individual experience. I think you can be in love without walking down the aisle, or you can walk down the aisle and be in love, but everybody deserves that choice and I think that equality is very important. People ask me questions about the whole Obama thing and him coming out and saying it publicly, and I’m like, “I hope soon enough we’ll look back and say to ourselves how ridiculous it was to think this way, just like it was during the civil rights movement.” We’re embarrassed. And it is completely embarrassing. We’re a young country and we’re developing slowly; we’re not as cultured as the Europeans. But that’s OK. We’re gonna get there, and hopefully there will be more tolerance in the world very soon and we won’t make the same mistake twice.

Q: You’ve shot whipped cream and fireworks out of your boobs …

A: Actually, if you look at the placement of those fireworks, they come from my spirit. (Laughs) But I know people love going straight to the tits. They’re a big target on me.

Q: If you could shot anything else out of your boobs, what would it be?