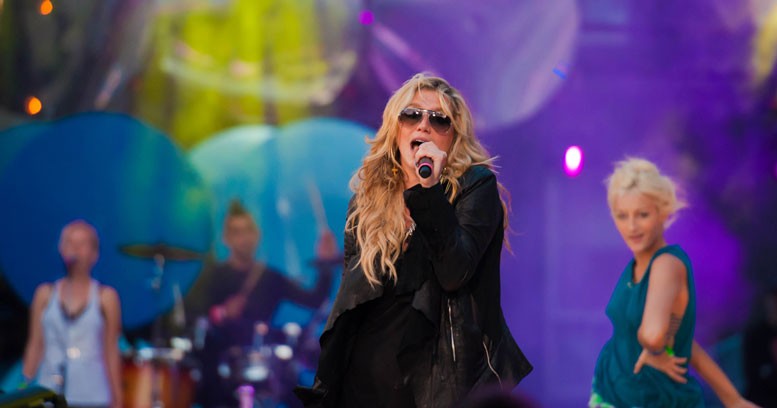 Pop singer, Kesha, received a Human Rights Campaign’s Visibility Award for her work to “advance and advocate for the LGBT movement” at the the 21st Annual HRC Nashville Equality Dinner two days ago.

“Kesha has unapologetically used her influence and international platform to bring attention to the challenges faced by the LGBT community,” said Blake Brockway, co-chair of this year’s dinner.

Introducing Kesha, her friend Wrabel had compliments for the artist.

“Her music gives us life, her voice sings out for so many who are silenced,” Wrabel said. “By their own fear, by a bully at school, or their workplace, by their family. Kesha’s words are written on her heart and her heart is pinned to her sleeve. And through music and her example, she offers a safe space where you can be who you are and you can love every part of yourself.”

Kesha’s first album, Animal, debuted at number one in the United States in 2010 after her breakthrough appearance on rapper Flo Rida’s number-one single, “Right Round,” in 2009, according to the HRC. She has claimed two number-one singles, including “We R Who We R” and “Tik Tok,” which itself sold over 14 million units internationally making it among the best-selling digital singles in history. As a songwriter, her hits written for other artists include “Till the World Ends,” sung by Britney Spears. In 2012, Kesha’s second album, Warrior, brought her eighth top-ten single, “Die Young.” Kesha been nominated for over 60 awards, and won the MTV Europe Music Award for Best New Act in 2010, among numerous others.

When receiving the award, Kesha thanked her fans.

“You are all beautiful just as you are,” she said, according to people.com.

Also during her speech, Kesha called out a bill in Tennessee, where the event was held, that would prevent transgender students from using the facilities that match their gender identity.

“I know people have been talking about that all night, but that’s f—–!” she said. “That’s why my message has always been about being yourself, and we really have to love each other and support each other.”

She also thanked those who have supported her during her ongoing legal battle with music producer Dr. Luke, whose real name is Lukasz Gottwald. She alleges that Luke sexually and psychologically abused her.

“For any of you who know, I’m going through some personal things that have been really intense and hard lately, and I just want to say thank you for any support I’ve received,” she said.

According to Newsweek Europe, stars including Lady Gaga, Lorde and Adele have spoken out in support of Kesha, while “22” singer Taylor Swift donated $250,000 to support her while her recording career remains in limbo. And, The Rolling Stone just reported that “Kelly Clarkson revealed in a new interview that she was “blackmailed” by her record label into working with Dr. Luke, the same producer currently engaged in a legal battle with Kesha, prior to the release of her 2004 album Breakaway.

Speaking to Australia’s KIIS, Clarkson said she only worked with Luke “because literally I got blackmailed by my label. They were like, ‘We will not put your album out if you don’t do this.’”

Read more about this story here.