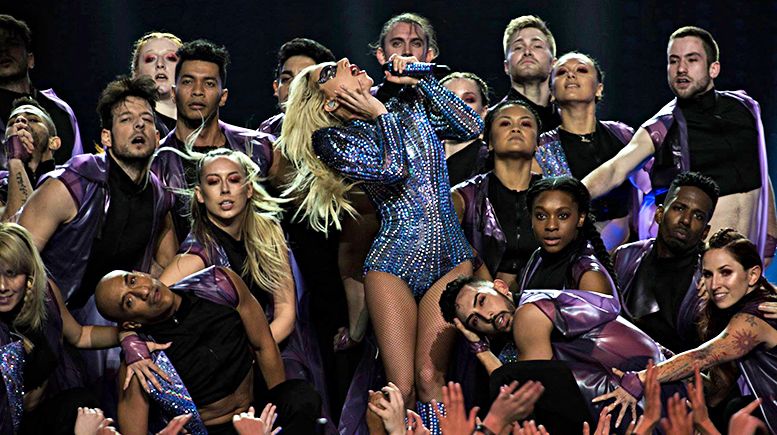 Lady GAGA in one of the rehearsals while in Houston, TX.
Photo: Lady GAGA's FB Page

Lady Gaga has been vocal about social justice issues in the past, At the Super Bowl not so much

Last Sunday, as the second quarter of Super Bowl LI dwindled to a close, I found myself anxiously inching toward my television as I braced myself for Lady Gaga’s halftime show.

After witnessing Beyoncé’s brilliant tribute to the Black Panther movement and Black liberation the year before, I was convinced Lady Gaga would follow in her predecessor’s footsteps with an “in your face” political statement chastising the current presidential administration’s bigoted policies; an expectation firmly solidified after witnessing her protest in front of Trump Tower in New York City. However, by the time the smoke had cleared and our “Mother Monster” had swiftly left the stage, I found myself yearning for more.

I was disappointed in her choice of opening song. Hoping to reach across the aisle and link opposing groups in unity, one can speculate that the intention of the tune was to serve as a beacon for solidarity. However, “This Land is Your Land” has been so heavily infused with blinded nationalism that the words have lost their radical significance.  Often times, the lyrics are widely celebrated by fans who in the same breath perpetuate xenophobia.

A good example is American television personality and conservative pundit Tomi Lahren—someone who in no way supports equity for immigrant communities—praising the song choice. If Lahren did not register the political messaging behind the song choice, it is safe to presume that neither did many in her audience—the very population we are so often hoping to sway into dismantling social inequity. It is not enough to _indirectly_ give a political statement, because as we see with Lahren, it risks missing the mark. We need more direct messaging from allies; more direct declarations of why injustice is unacceptable and why it needs to be ameliorated.

With the recent spotlight on immigration reform, I was flabbergasted to see that Gaga did not sing the lines from the original 1940 lyrics most relevant to the current political environment:


“Was a high wall there that tried to stop me
A sign was painted: Said Private Property,
But on the back side, it didn’t say nothing-
This land was made for you and me.”

It’s time we expand beyond self-empowerment activism (i.e., love is love, we are all God’s children, etc.), which happens to be the platform on which Lady Gaga builds the foundation of her social justice endeavors. This is not to say that there is not a space or need for this style of activism. On the contrary, many studies have shown that affirmative and empowering messaging helps decline rates of emotional distress, psychological trauma, and suicidal behavior or ideologies. Validating imagery and dialogues also help motivate acceptance and respect. In fact, Lady Gaga aside, many activists engage in this form of protest and social justice. But, when you have a platform as massive as the Super Bowl half-time show, we have to make people start engaging in those uncomfortable conversations that are so pivotal to breaking down systemic oppression.

When it comes to liberation, it is not sufficient to simply spread messaging such as “the marginalized are amazing and powerful,” which is what she did with hits such as “Born This Way,” “Edge of Glory,” and “Poker Face.”  We have to establish this notion, but also speak to the oppressing party and say, “Why do you think it’s okay to oppress or marginalize certain communities? It is actually harmful, violent, and counterproductive to equity.” Many of Lady Gaga’s political anthems are important statements on equality and empowerment, but often dabble in the former approach and not the latter. Telling me, for example, that as a queer person of color I matter is great and important, but the extra step is telling other folks that oppressing me is not okay. That is an opportunity I think her performance missed.

If Lady Gaga never engaged in confrontational tactics in her activism I would not denigrate her half-time performance since it would have been outside her scope of activism. However, the fact of the matter is she can and has engaged in more forward protest. If she has no problem making bold statements and criticizing Trump on a media platform, then why was the Super Bowl, the arena in which she arguably had the most eyes on her, the time to back off that tactic? When  is the perfect opportunity to challenge his bigotry?

Madonna has engaged in confrontational activism, and the Dixie Chicks did it with former President George W. Bush, so it is not as if cisgender white women have not done it before. Furthermore, Lady Gaga has often been reputed as being more liberal than the aforementioned acts, so how could she have been the one to back out? One could argue that more aggressive protest tactics would have been harmful for her career. The Dixie Chicks can certainly attest to that danger. However, when artists begin to choose their careers over the livelihoods of others I do begin to question their efforts in the struggle for social justice. Career damage aside, they are financially privileged enough that they will live stable lives regardless of whether they are making $50 million or $2 million a year.

Many of Lady Gaga’s halftime show supporters have derided these critiques out of concern that we might intimidate budding activists and frighten them out of joining our plight. Many contend that we should be celebrating individuals for joining the battle for equity rather than scolding them for their lack of fluency in “woke culture.” I still go back and forth with my feelings on this line of logic. On the one hand, it is important to recruit allies because without them we are limited in the amount of progress we can make. However, I also dislike this mantra because it tells the marginalized, in crude and reductive terms, that we have to accept less than stellar effort from allies or risk losing them. And having us accept subpar services or get nothing is the foundation of systemic  oppression.

My compromise on this issue is having allies work with budding new activists. For example, I am too fatigued to calmly correct people when they do not do enough along the axis of poverty, immigration, race, and sexuality. It is within these arenas that I often rely on allies most heavily to work and reach across the aisle. In my case, I also try to do more as a feminist to engage men in dialogues around misogyny and sexism because I know how taxing it is to ask women to humor slow-paced activism from those raised under the toxicity of patriarchy. It is okay to ask allies to do more and improve. It is only with critique and constructive criticism, rather than the condoning of mediocrity, that we move forward.

The solution here is not to dismiss Lady Gaga as an activist. She is certainly brilliant, innovative, and loyal to the objectives of unity and equity. My goal here is not to banish her from the realm of social activism. She still has a place in our movement and as a bisexual-identifying woman is also a member herself of the LGBTQ community. Rather, my objective here is to remind her, and those who commended her halftime show, that while they have gone above and beyond in the past, even they can miss the mark sometimes. As allies to the communities with which they might not personally identify (e.g. people of color, people living in poverty, etc.) they must be willing to accept critique, acknowledge where they can benefit from improvement, and move forward using nuanced strategies that address fluctuating political climates.

*Mike Yepes is a genderqueer Latinx social justice activist in the Greater Boston area. They graduated from Brown University in 2013 with a B.Sc. in Neuroscience and currently works in the realm of sexual health advocacy while applying to graduate programs to pursue a Masters in Public Health. Their long term interests revolve around health care equity for immigrant, queer, and POC communities and those who find themselves at the intersection of these identities.