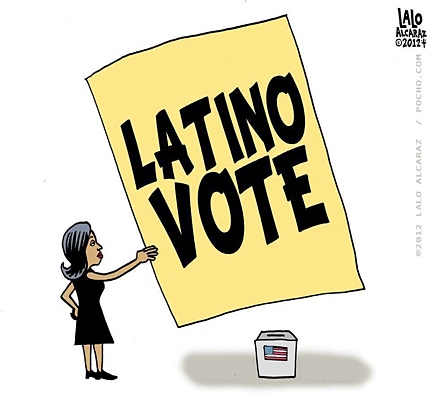 Latinos voted for President Barack Obama over Republican Mitt Romney 71% to 27%, according to an analysis of exit polls by the Pew Hispanic Center, a project of the Pew Research Center.

Obama’s national vote share among Hispanic voters is the highest seen by a Democratic candidate since 1996, when President Bill Clinton won 72% of the Hispanic vote.

Among Latino voters, support for Obama was strong among all major demographic sub-groups. However, there was a gender gap among Hispanics as there was among the electorate as a whole. Obama carried Hispanic women with 76% of the vote and Hispanic males with 65%.

The analysis of exit polls in this report is limited to 12 states. These states are Arizona, California, Colorado, Florida, Illinois, Nevada, New Mexico, North Carolina, Ohio, Pennsylvania, Virginia and Wisconsin.

For more on the changing demographics in the United States, see a new commentary released today by the Pew Social & Demographics Trends project. The commentary, “A Milestone En Route to a Majority Minority Nation,” notes that by 2050 the minority groups that carried President Obama to victory yesterday are on track to become a majority of the nation’s population, and that the Hispanic share of the U.S. population could be as high as 29%, up from 17% now.

The Pew Hispanic Center, a project of the Pew Research Center, is a nonpartisan, non-advocacy research organization based in Washington, D.C. and is funded by The Pew Charitable Trusts.