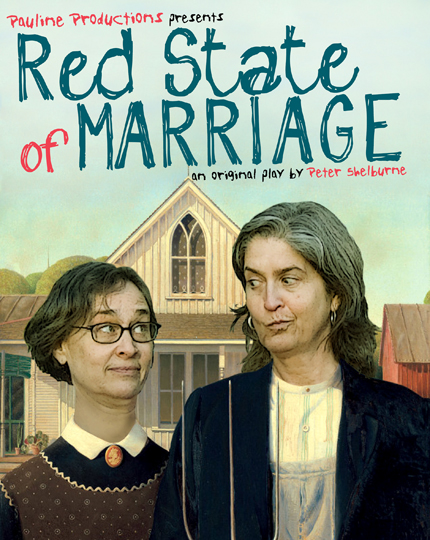 NORTHAMPTON, Mass. — Local comic actresses Julie Waggoner and Jeannine Haas are teaming up again, this time on a new play created specifically for them by local playwright Peter Shelburne. Red State of Marriage will open at Signature Sounds’ Parlor Room in Northampton and run for the first two weeks in May, coinciding with gay pride celebrations. It will then move to the Arts Block in Greenfield for one more week. This Pauline Productions play will be the first theatre production to inhabit Signature Sounds’ Parlor Room – a new intimate performance venue right in the heart of downtown Northampton.

Haas and Waggoner — both of whom are known for their ability to portray characters of all ages, genders, and sensibilities — performed together to sellout crowds in Pauline Productions’ 2009/10 Parallel Lives: The Kathy & Mo Show, by Kathy Najimy and Mo Gaffney. They were looking for a script in which they could again work together creating multiple characters. Each had independently worked with local playwright Peter Shelburne during the

Valley’s annual 24-Hour Theatre Project(s) and loved his writing. Waggoner asked Shelburne to write a play for them and he agreed.

“They’re both very talented, and a playwright rarely gets this kind of opportunity,” said Shelburne. The three met for an improvisation session and Shelburne then spent the summer of 2012 creating this new two-woman, multi-character play.

The two actresses play all the parts in this often funny, sometimes heart-breaking portrait of love and marriage — a relationship sometimes supported, and sometimes not recognized, a “red state” of sorts. The play has a unique structure: in Act One, Kim (Haas) remains a constant and the actress playing Katherine (Waggoner) plays all the other characters. In act 2, Katherine remains constant, and Haas embodies the other five roles.

The play is directed by Toby Bercovici who directed last year’s Pauline Productions’ O Yes I Will by Deb Margolin starring Haas. Bercovici is just back from directing Genesis in NYC; her recent local directing credits include Northampton Center for the Arts’ farewell production of Our Town.

Julie Waggoner is an actress, improv comedian (with The Villa Jidiots and The Ha-Ha’s), and standup comic. She appeared as multiple characters) in Pauline Productions’ Parallel Live: The Kathy & Mo Show (2009-10), which ran to sold-out audiences. In early 2009, she co-produced and co-starred in The Vagina Monologues at the Academy of Music. She played a beer-drinking nun in New Century Theatre’s 2008 production of House of Blue Leaves. She performed yearly in the Woman on the Edge and Planet Girl variety shows in both Cambridge, and Provincetown, Mass., from 1993-98. She has been a regular performer in the city’s annual Transperformance; her personas have included (F)Eminem, Edith Bunker, Madonna, and John Travolta — as well as several stints as Ed Sullivan in the annual Really Big Show.

Jeannine Haas is the founding Producing Artistic Director of Pauline Productions Theatre Company, now in its sixth year, where she most recently performed the one woman show O Yes I Will by Deb Margolin. At Pauline she has directed or acted in: Boston Marriage, Stuff Happens, Doubt, Mystery of Irma Vep, Mayflower Plantation, Shiloh Rules, Parallel Lives: The Kathy & Mo Show, and Scaramouche Jones. She also directs at Hubbard Hall Theatre, Cambridge, New York (Amadeus and You Can’t Take It With You) and performs regularly with New Century Theatre, most recently Dr. Waller/Mrs. Holly/Nurse in Distracted and at the Majestic Theater Company, most recently May in Cabbage Patch.  [pullquote]”Red State of Marriage” follows the 20-year relationship and marriage of Kim and Katherine, and their family: Theo, their rebellious artist son; Pop, Katherine’s cranky homophobic father; Buck, Kim’s ex-husband and Theo’s biological father; and Ricky, their somewhat randy handyman friend.[/pullquote]

Pauline Productions is dedicated to fostering strong roles for women onstage and behind the scenes. To date, the company has produced two new plays by local playwrights. It has also seeks out numerous unique venues — and has been the first theatre company to perform in them — including Three Sisters Sanctuary, the Lawn of Historic Northampton and Signature Sounds. Past productions include Boston Marriage, Stuff Happens, Doubt, Mystery of Irma Vep, Mayflower Plantation, Shiloh Rules, Parallel Lives: The Kathy & Mo Show, and Scaramouche Jones and O Yes I Will.

Peter Shelburne lives in Northampton. He graduated from Yale University with a double major of math and Latin, and has a PhD in abstract mathematics from Michigan State. Currently he teaches math at The MacDuffie School. He frequently participates in Northampton’s 24-Hour Theatre Project, and has written eight full-length plays. His plays have had readings and workshops in Montana, Chicago and New York City and one of his short plays (GPS) was included as part of the Boston Theater Marathon.