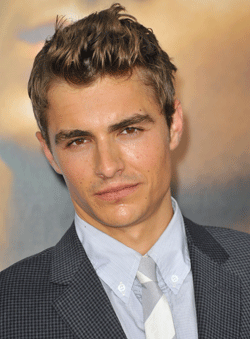 James Franco isn’t the only one fearlessly exploring homosexuality in his career. His own brother, Dave, is too. With himself, even.

The 27-year-old has attracted a big gay fan base ever since he starred in the 2007 indie After Sex, the one where Mila Kunis was a lesbian, and put Channing Tatum in his place after a homophobic mix-up in last year’s 21 Jump Street. But it’s Dave’s viral Funny or Die videos, where he’s had sex with himself and also told actor Chris “McLovin” Mintz-Plasse “I wanna strip you down” (and other homoerotic things), that have really made the gays smitten.

Now the heartthrob is fighting zombies in the film adaptation of the best-selling book Warm Bodies, also starring Nicholas Hoult of A Single Man. In his first gay press interview, we picked Dave’s brain on the outsider theme of his new flick, whether he plans to work on a gay project with James and how his sexually explicit videos are in no way baiting the boys who love them.

Chris Azzopardi: Under what conditions could you fall in love with a zombie?

James Franco: I don’t think the physical appearance is getting in the way for me. (Laughs) As long as they were a good person in the past life, and there’s just some kind of sweetness behind those eyes, I’m in. I don’t need much else.

Q. Do you think there’s some subtext in the movie’s theme about love being boundless and knowing no sex or race – even life or death – that you think your gay fans might appreciate or relate to?

A. Definitely. If you take the zombie element out of the movie, it is still this coming-of-age movie about this outsider who is trying to find himself and eventually does through love. It does speak to the fact that it doesn’t matter what your race or your sexual orientation is. Sometimes you can’t explain a connection that works.

Q. When were you first aware you had a gay following?

A. My friend I grew up with started calling me out and saying, “Dude, I can’t even imagine what people who don’t know you think of you.” It’s not like I’m doing these videos because I’m trying to shock or confuse people. I’m generally drawn toward material that’s just different and unique and is gonna maybe surprise people a bit. So I was first aware that there was maybe some awareness of me from the gay community when all my friends were telling me there’s all this stuff online and if you Google my name, the first thing that comes up is “Dave Franco Gay.” (Laughs)

Q. So right around the time you f#$@&d yourself?

A. (Laughs) That didn’t help things.

Q. Whether you’re having sex with yourself in “Go F@#k Yourself” or talking dirty to Chris in “You’re So Hot,” are these videos your way of showing your acknowledgement and support for the gay community?

A. Yeah, sure – definitely! I have gay friends and of course I’m comfortable enough with my sexuality that I’m open to doing videos like that. I know a huge audience is going to think that I am gay. I’m just trying to blur the lines, I guess. I’m not consciously trying to do that, but it’s not something I think about. Like with my friends who are gay, it’s not like that’s the first thing I associate with them. They’re just another friend, and they just happen to like guys.

Q. Why are all the videos so gay?

A. There are a lot of very overtly gay things in these videos, but for some reason while I was making them, or while I was even initially thinking of the ideas, I swear to god I didn’t think, “OK, we’re gonna make another gay video that’s gonna shock people.” The way “You’re So Hot” came about: I worked with Chris on a movie called Fright Night and in between takes we would play this game. It was a game that he and his buddies played growing up and it just made me laugh my ass off, so when the movie was done and we were back in L.A. I thought to myself, “This would make a really funny short.”

Q. Being comfortable with your sexuality seems to be something that runs in the Franco family. Obviously your brother also has no qualms with his sexuality. But whereas you explore it with humor, James has more of a political and sexual agenda. Do you see any overlap in the way you two explore homosexuality?

A. That’s a good question. The main overlap is just how hard we dive into it. There’s nothing subtle, I guess, about how we embrace gay culture – and there basically are no boundaries. We both push the envelope.

I don’t know why a lot of what we create deals with that subject matter. I get asked that all the time, and I’m not consciously thinking to myself, “I’m gonna make these sexually explicit gay videos.” It just comes through us for some reason.

Q. You obviously have lots of appeal in the gay community. To know that, you don’t have to look further than Perez Hilton’s recent post, which includes a couple of pics of you and “Dear Dave Franco, F#$K ME!!!” as the headline.

Q. How do you react to the gay community’s excitement over you and your videos?

A. I gotta embrace it, right? I love it. At this point, I’m so happy that anyone is even aware of me or is a fan of me. It’s still something that I don’t think I’ll ever get used to. From just what I’ve heard and what I’ve observed, the gay community, when they revolve toward someone or something or a movie, they come full force and they tell everyone about it. Tell me if I’m wrong.

Q. No, word spreads fast in the gay community if a Franco brother is naked.

A. Exactly. So I totally embrace it.

Q. With your upcoming role in Now You See Me alongside some heavy hitters, your career is really taking off. Are you ready for a lead role? Any idea what you might want that to be?

A. I’m definitely ready for a lead role. My criteria for picking a project these days is just wanting to work with filmmakers I admire. I do want to make my own films one day. I’ve been writing and producing and editing all these Funny or Die videos, and it’s kind of been practice on a much smaller scale. I want to work with guys like Jonathan Levine, who directed Warm Bodies and who I’ve admired for years. I just wanna be on set with these guys and see the process and see how they work with actors regardless of how big or small my role. So, honestly, I would be an extra in all of Paul Thomas Anderson’s movies. I just wanna be around these guys.

Q. The Funny or Die videos really helped launch your career, as did the “Acting with James Franco” skits. Other than Broken Tower, do you have plans to work on any projects with James that might have a gay sensibility?

A. I love my brother and I respect him so much, but in general, I have been trying to distance myself from him just in terms of work, because I need to kind of carve my own path at this point. I don’t want to be referred to as “James Franco’s little brother” for the rest of my life. So it’s hard sometimes, because he is creating so many of his own projects and he asks me to be a part of them and I would love to – but at this point, I just need to distance myself from him work-wise.

Down the line, who knows, man. We do work very well together and our sensibilities are very similar, obviously. We might push the envelope almost too far if we combine our heads. I’m open to the idea. If I establish myself a little bit more, and people start giving me my own due, I would love to work with him down the line.

Q. You say “almost too far.” You mean make it too gay? I think that’s already been done by both of you.

A. Who knows how weird it could get if the two of us get together.

Q. You mention his projects, and currently James is making headlines for his interest in gay art films, including the gay sex indie Interior. Leather Bar. Have you seen it? Do you plan to?

A. The only one I’ve seen is Broken Tower, just because I was a part of that production. I’ve obviously heard stories or read about these projects, but I really have no basis to say anything at this point.

Q. Do you get annoyed when journalists bring your brother up?

A. No! I totally understand it. It could be a lot worse. At least he’s a very well-respected guy, and I do love him. We get along very well. But with that being said, it is a little comforting, and I feel slightly relieved, that at least the James questions have been dialed down a little bit.

Q. What’s coming up for you besides Now You See Me and Warm Bodies?

A. There are a few things that are in the air that I can’t quite talk about just yet, but I am always pumping out these Funny or Die videos. I do all of them with one of my good friends who I’ve known since childhood, and we have one coming out in a couple weeks. This one is actually the cleanest one we’ve done. The rest are rated X, but this one’s like a hard PG-13.

Without giving too much away, it’s with an NBA star who’s 7 feet tall and then, of course, myself. I’m not the biggest guy in the world, so it’s this odd couple – the two of us competing in a series of events. It’s still in the same vein and tone as the rest of the videos, but because he’s a professional athlete, he can’t push the envelope as much as I’d generally like to.

I’m always writing something. I’m working on a feature-length film right now. Two years ago I made a decision to only audition and meet on projects that I’m actually passionate about. I knew it might be the stupidest decision I ever made because I might never work again, but in the meantime, that’s how these Funny or Die videos came out.

The Murder Mystery Company Offers a Killer Night of Suspense, Intrigue and Comedy

7 Award-Worthy LGBT Films to Cozy Up to This Fall

God Loves You as You Are, Even if Your Parents Don’t: Supporting a Declining Parent