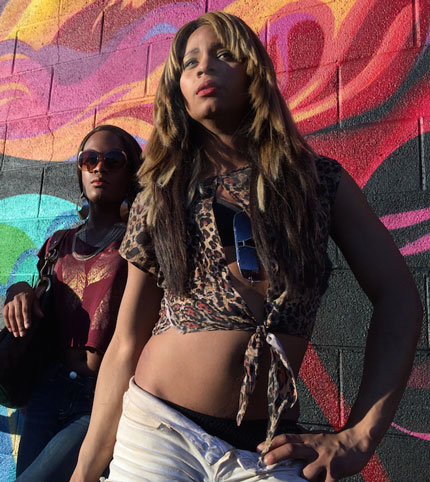 There was a time in LGBT media stories when the G dominated the conversation. We love gay men, of course, and their stories are in no danger of extinction. But we also longed for more movies and TV shows about the L, the B, and the T, for narratives we weren’t getting, for people of color to have a stronger voice, for older lesbians, for everybody else to sing their song. In 2014, Time magazine put Laverne Cox on the cover and called that moment “The Transgender Tipping Point.” And in 2015, here’s what we got…

Is there anyone you know who doesn’t have an opinion about Ms. Jenner, no matter how ignorant, ill-informed or warped by loathing of Kardashian, Inc.? Probably not. And Cait’s learn-in-public approach has been fraught with problems and missteps. But we’d rather live in a world where she gets to speak and be heard than not, so we’re going to trust that she’s moving in the right direction. Meanwhile, here’s hoping season 2 of her reality show keeps glorious Jenny Boylan on board for wisdom’s sake.

There is no more cuddly show on the air right now than the sweetly sincere I Am Jazz, featuring trans teen Jazz Jennings and her fiercely loyal family. If you hate reality TV because of its trumped-up exploitation and fake drama, the daily life of Jazz, her thoughtful parents, protective twin brothers and adorable grandparents is the antidote. This kid is going to be all right.

There’s no such thing as a cultural product that satisfies everyone, and when the subject matter is as rare as that of a person transitioning late in life, the burden of representation weighs heavily. But this series, entering its second season, succeeds by being specific and well-made rather than trying to be all things to all people.

The reality series about a black, queer, gender-nonconforming dance troupe in the Deep South wisely refused to overplay the overt, awful discrimination they face. It was on display, to be sure, but what comes through most is the joy of life these young prancers feel when they move the crowd. And they really move the crowd.

Gritty, funny, dark, moving, with a story that was molded into shape by its stars Mya Taylor and Kitana Kiki Rodriguez, Tangerine is the best queer film of the year. The dynamic duo played a pair of Los Angeles sex workers on a fractured Christmas Eve, pushing their way through the city and testing the bonds of friendship. It’s a portrait of street life that’s as tender as it is tough.

Nearly a century ago, a Dutch landscape artist underwent gender reassignment surgery. Now it’s an awards-season film starring Eddie Redmayne. It’s come under a cloud of criticism for its casting, its treatment of trans identity, and its trans-education-for-your-parents approach to storytelling. But it’s here, and it’s still queer, so if your conservative Dad walks away from it learning a little more than he knew before, that’s still a mark in the plus column, right?

You guys, it’s a cartoon series for kids and it features queer and gender-nonconforming characters, including one that is actually two lesbian space rocks who are fused together for eternity. Repeat that sentence out loud to yourself and marvel at the beauty of the world in which we live. If it still doesn’t make sense, then you’re not 7 years old. Work on that.

*Romeo San Vicente is Father Christmas. Or Daddy Christmas, if that’s your thing. He can be reached care of this publication or at DeepInsideHollywood@qsyndicate.com.