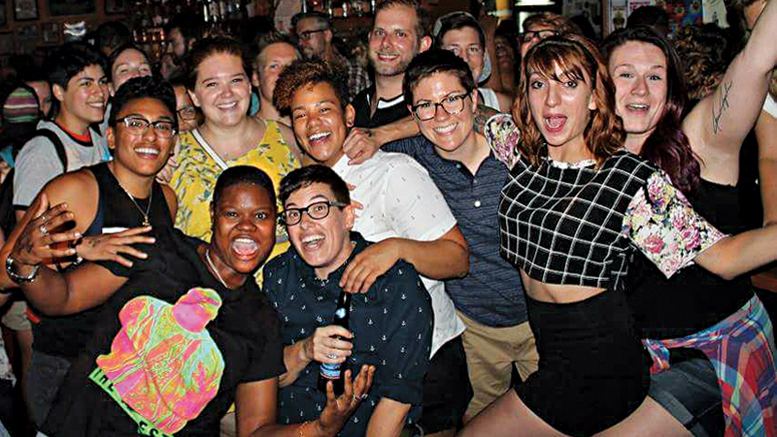 A Queeroke night held at the Midway Cafe; photo courtesy of queeroke

In the wake of President Donald Trump’s election, the LGBTQ community is finding other ways to exercise power outside of the voting booth.

A growing awareness of LGBTQ-affirming establishments is filling a space that many see as threatened by the current political and social climate. Whether a space specifically for LGBTQ-related products and services, or simply a coffee shop that makes clear they are a safe space for LGBTQ people, the community is starting to support these spaces.

AJ*—a young transgender man embarking on the journey of expressing his true gender identity—sees these spaces as crucial as he navigates the often anxiety-inducing trials of transitioning publicly.

“It’s important to be comfortable to be yourself, especially in the beginning stages of transitions,” AJ said. “Especially with name and pronoun changes, and knowing that there are other people going through what you’re going through.”

In his daily life, AJ said facing the world even in ordinary situations like grabbing coffee or going grocery shopping can be difficult when beginning to transition.

AJ said he often seeks places where he can feel safe whenever he can. Along with transitioning, AJ is affirmatively trying to adjust the regular workings of his life around LGBTQ-affirming institutions and businesses wherever possible.

The ability to feel comfortable in his own skin, AJ said, is perhaps the most important reason.

“I think that’s the common denominator for the LGBTQ community, and even for any sort of minority, that’s a similar feeling across the board,” AJ said. “Everywhere should be a safe space, but if we have these businesses that start to do it, it’s a movement in the right direction. It may seem small, but it is actually quite a huge improvement.”

Safe spaces are, in many ways, shelters for some people to feel supported during landmark life events like coming out or transitioning.

Erin Fallon, one of the organizers of “Queeraoke” at Midway Cafe in Jamaica Plain, has witnessed the importance of safe spaces firsthand.

“There was this young queer man who had come from New York, had quite literally moved from

New York a day before Queeraoke,” Fallon began. “He went up onstage, and said, ‘My name is Steven. I don’t have a friend to speak of, and I need a friend.’”

Queeraoke, apart from being a fun night to party in a safe space for LGBTQ people, is often a place where one can find support in trying times.

“Everybody got up on stage and circled him, and hugged him,” Fallon said.

Queeraoke has been an institution for acceptance and inclusivity for nearly 15 years, according to Fallon.

Fallon, a queer-identifying lesbian who has been managing the event for several years, said the aim has always been to bring in more marginalized communities. What makes Queeraoke special, according to her, is the intersection of private enterprise and social acceptance.

Midway Cafe has been a mainstay in the local music scene for years. A venue that often features independent acts from around Boston and beyond, it has always been a place that—on an artistic level—has been open and affirming.

Queeraoke is the LGBTQ community’s chance to partake in this ideology, which Fallon said has proven invaluable to the many people who attend. With a hands-off approach, the ownership of Midway Cafe has given Fallon and her management team an opportunity to take the reins and realize Queeraoke’s mission.

“What I’ve seen in the past five years is them really handing the mic over to us. Being the queer promoter has really allowed me to take the night to a place where he lets [that mission] happen,” Fallon said. “Especially for a bar that is not owned by someone who is queer, I think it is the opportunity to not just engage folks in that night and show support and solidarity and allyship if you will, but really a chance to let shine a community for a long time that had to be more in the background.”

Establishments that operate as a hub of allyship—whether queer-identifying or not—may have an impact on those seeking to conduct business in a safe space.

AJ said his experience at The Garment District, a Cambridge business known as one of the best places for second-hand clothing, was a welcome relief for a common issue transgender people experience.

With non-gendered bathrooms and dressing rooms, AJ said he felt at home shopping there.

“That was a really great place for me to go that my friend brought me to because I felt comfortable finding the clothes I wanted, and being able to go into the dressing rooms,” AJ said. “I didn’t have to ask the question of ‘Do I go into the men’s or women’s dressing rooms? Do I go to the men’s or womens bathrooms? They were really nice addressing me [with] the proper pronouns as well.”

The Dance of Business and Politics

“Any time you make a specific allegiance or dis-allegiance to any kind of polarizing ideology, it’s always going to partially be a political stance, but it’s one that the businesses can personally choose,” Kafka said. “It’s one that I feel is important for my business to make sure we express for the people who are interested in coming to our business that it’s a place where they can feel comfortable.”

Kafka said the circus arts world in general is a welcoming community for LGBTQ people. As one of the core values of that field is valuing alternative forms of expression, he’s found that people from all walks of life, in and outside the LGBTQ community, have the opportunity to express themselves freely.

“The reason that I feel that it tends to be attractive to a lot of people in LGBTQ communtiies already is because as people who are discovering our own sexualities or our own gender identities, we’re trying to feel our own way or carve our own path with our own expression, and the way that we treat artistic expression through circus arts has a very similar parallel to that,” Kafka said. “We’re taking our own inner feelings, and expressing them in a way that we’d like to share with others.”

In many ways, according to Kafka, making a political statement in support of LGBTQ communities is increasingly becoming a sound business strategy as well.

“Especially in the Boston area, as far as business goes, it’s not a super bad thing for business to be LGBTQ-friendly, especially because the community around here is especially liberal,” Kafka said.

In terms of making political statements, Fallon said businesses starting to court the LGBTQ population could translate into other kinds of power.

“I think money is powerful. I think that the more we support queer-run events and nights and businesses, the larger voice we get on the stage so to speak,” Fallon said. “As people start to see us, and continue so see us grow in numbers, being public and engaging in community just outside of our own spaces, it turns into more political power. We become not just relevant, but also counted.”

Mary Kennedy—a lesbian and owner of Kennedy Publishing Media—believes, one of the most important tasks of LGBTQ-affirming businesses is sticking together.

Kennedy’s company owns Pinkweb (http://pinkweb.com), an online and print directory of businesses who are either LGBTQ-owned or affirming.

Operating since 1981, Kennedy believes supporting the LGBTQ community is important to keeping the momentum of social change alive.

“It’s important to support people that support us,” Kennedy said. “It’s a community that’s always advanced itself, and it’s something where if you want someone to do a service, you want to make sure they’re sensitive to the community.”

As support for LGBTQ-affirming businesses grow, Kennedy said, the choice of whether or not to support the LGBTQ community will become a more obvious one.

“I think it goes hand-in-hand,” Kennedy said. “Business, especially non-gay business, sees an opportunity in the gay community that has a high discretionary income.”

As a particularly valuable resource to the LGBTQ community, Kennedy said being in business all these years has given her the opportunity to feel like she has given back.

“As a lesbian, it’s a great opportunity to be a part of the community, and I think that’s what really kept us around. We enjoy working for the community and with the community,” Kennedy said. “The more viable or high-profile the community, the more businesses are more open to courting the community. It’s about exposure, letting people know that they’re there.”

A Source of Allyship

In terms of furthering awareness around LGBTQ issues, Fallon said allies in both the business community and beyond are paramount.

Midway Cafe has been an ally in hosting Queeraoke, Fallon said, even when business wasn’t so good.

“I think having someone like Jay—the owner—or a place like Midway Cafe commit not to just making money, is incredible,” Fallon said. “I have to be honest, we have booming nights, but of course there are nights where things are tough. It’s rare, so we’re fortunate.”

The fact that Queeraoke has been running this long, amid the ups and downs with business, is evidence to Fallon that Midway stands as an ally to the community.

“That commitment to allow us to set forth and tell the story and shape the night and give back to our community is a really important sign that there is support there, that it’s not just superficial and about money,” Fallon said.

Allies, AJ said, are a part of the community, and should make their status known.

*For the sake of respect and safety for his identity, “AJ” was used as a name attributed to maintain anonymity.

For more information on Queeraoke, a weekly LGBTQ get together that takes place every Thursday, visit their Facebook page.