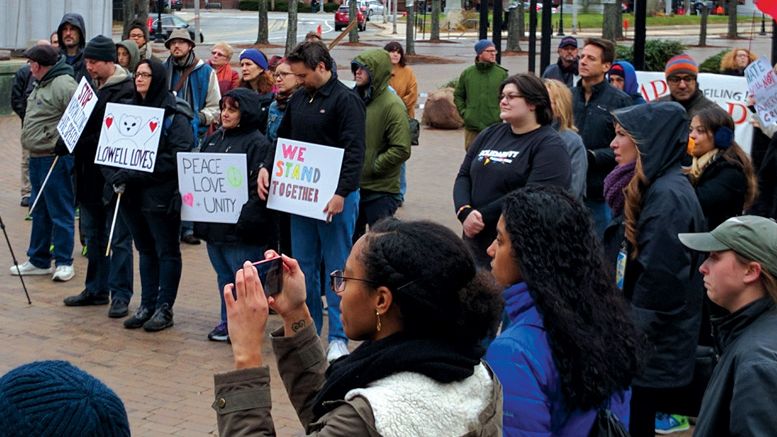 LOWELL, Mass.—When Nancy Green thinks about the election of Donald Trump, the safety of her transgender daughter comes to mind.

“I want her to feel safe in her own skin, and feel safe with where she goes,” said Green, an organizer for grassroots advocacy group Solidarity Lowell. “My push is to protect people so they can live their lives normally, regardless of the rhetoric that came up with the campaign.”

On Nov. 12, hundreds took the streets in Lowell to protest the election of President-elect Donald Trump and Vice President-elect Mike Pence. While many protests came to an end, dozens of Lowell-area residents reached the same conclusion: the mission of being the antithesis of what Trump and Pence stand for must turn into a movement.

From there, Solidarity Lowell was born. Lynne Lupien, another organizer of the group, considers the movement a mode of expressing a deep-seated rejection of what could potentially become normalized: misogyny, racism, and prejudice.

“We need to express our fear and anger over what happened,” Lupien said. “We have arranged the group all over the political scale, but something we all agree on is this shouldn’t be normalized.”

In the first meeting, dozens of people showed up. Lupien, who has worked in political organizing in the past, said the turnout and passion of participants has been inspiring.

“We had more people than we had chairs,” Lupien said. “That was a good problem to have.”

While Green considers herself a liberal, she said fostering a safe world for her transgender daughter, Hannah, transforms the new presidency into something beyond politics. Hannah decided to come out publicly as transgender after the June 12 Pulse nightclub shooting in Orlando.

“The election happened, and we had to sort of pull her off the ceiling,” Green said. “We [made] a lot of progress in the Obama era, and we don’t want to lose it.”

For Lupien, she simply has to look around to see how the nation’s new political reality flies in the face of what she, and the City of Lowell, stands for.

According to United States census data dating to July 2015, more than 40 percent of the city’s population does not identify as white.

“We have a lot of vulnerable people,” Lupien said. “We’re supposed to be diverse and be proud of it.”

Even in a city such as Lowell, racism still runs high. In October 2015, the Lowell Sun reported incidents involving a high school class president receiving racist text messages, which sparked contentiousness within the school and the suspension of six students. The attitudes toward immigration of the new administration, Lupien said, will surely exacerbate the problem even in cities with high minority populations.

“We’re supposed to be diverse and be proud of it,” Lupien said. “They are still human beings, and they feel exactly how you feel.”

The wheels are already turning. The group, which meets weekly, has already begun planning many initiatives.

Bystander training, which Lupien said has already become increasingly needed amid the elections, teaches what to do when a person experiences harassment.

Green serves on the Safe Zones Subcommittee, which is currently lobbying businesses to establish themselves as safe spaces for people who feel they are in danger. When considered a safe zone, a business owner houses the harassed person and makes a commitment to keep them safe, including, but not limited to, calling the authorities to ensure the safety of a victim of harassment.

“It’s giving them a safe space until the harasser is gone,” Green said.

The group ultimately hopes to bring resolutions to the city’s government officials to make all of Lowell a safe place for the LGBTQ community, immigrants, and all marginalized groups.

People from all over the political, ideological, gender identity, and sexuality spectrum have come together in Solidarity Lowell to bring about change and to preserve the progress.

While Green said the safety of her transgender daughter has largely thrown her into the fight, Lupien, a white woman who identifies as cisgender, said in the privileged position she sits in the new threatening climate makes her feel an obligation to push for change.

Yet at the very base of the matter, Lupien said doing the work Solidarity Lowell is involved in touches on something that is in all ways what it means to be an American.

“It’s about everything that is under threat, including our democracy,” Lupien said.

More information about Solidarity Lowell can be found on their Facebook page.