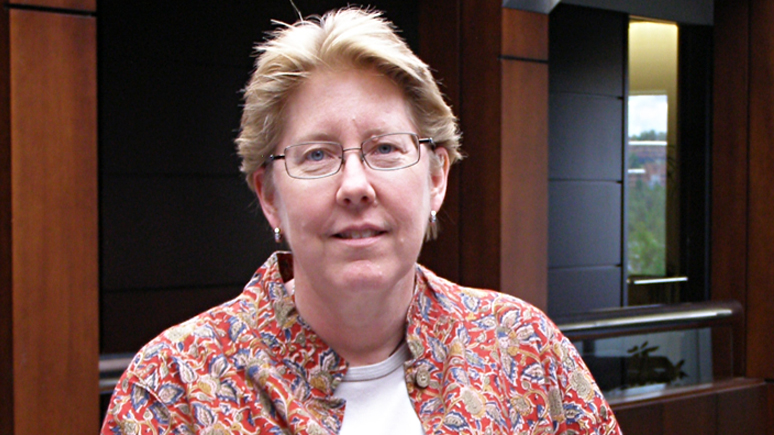 Sue Lambert is the co-chair of the LGBTA Resource Group at Thermo Fisher Scientific in Waltham. The company earned the highest rating in the HRC's 2017 Corporate Equality Index. Photo courtesy of Sue Lambert.

BOSTON—More than two dozen companies headquartered in New England received a score of 100 on the 2017 Corporate Equality Index (CEI), an annual survey conducted by the Human Rights Campaign (HRC).

However, the companies and the HRC are quick to point out that a “perfect” score does not mean companies have a perfect working environment for LGBTQ employees.

In addition, the HRC will continue working to combat regressive legislation in the Trump administration and Republican-controlled Congress.

The CEI survey is sent annually to all Fortune 1000 companies and other businesses with more than 500 employees.

It is designed to gauge quantitative measures of inclusion such as equal employment opportunity policies and LGBTQ recruiting efforts. All of the measures are things that companies can report on, or that HRC staff can verify from public information for companies who do not respond to the survey.

Beck Bailey, HRC’s deputy director of employee engagement programs, said this year’s results saw a 25 percent increase in the number of companies who received a score of 100, meaning they received all points possible in the evaluation.

“Having a score of 100 doesn’t mean that a company has zero issues left to face,” Bailey said. “It means they are setting up all the right things to address the next layer of potential issues like unconscious bias and challenges to inclusion.”

In determining the criteria for the CEI, Bailey said HRC focuses on elements that are “transparent, fair and attainable.”

Boston-based State Street Corporation was one of the companies to receive a score of 100 this year. Julie Haskell, the company’s managing director of global inclusion and diversity, said it has received that score all but one year over the past decade.

“We got a 90 in one year and as a result we took a look at [our] transgender benefits policy and medical coverage,” Haskell said. “We added that benefit to our medical coverage, which was a huge win for us as a company.”

State Street has a global ally program and pride groups at all of its locations worldwide. Haskell said the feedback she hears from those groups is that State Street creates a work environment where they can be themselves at the office.

“It’s incredibly powerful to be able to be your authentic self in the workplace. Not have to self-edit who you are,” she said. “In order to be [the] most effective person, you can’t be hiding. You need to be your true self.”

Thermo Fisher Scientific, based in Waltham, Mass., also received a 100 on the CEI. Sue Lambert, co-chair of the company’s LGBTA Employee Resource Group, recently celebrated her 25th anniversary with the company and said its inclusive mission has given her reason to stay so long.

“Thermo Fisher Scientific was on the leading edge of equality. For my 25 years, I always felt valued and protected, in terms of the benefits provided to me and my family,” Lambert said. “Long before it was the popular thing to do, the company recognized it was the right thing to do.”

HRC is the nation’s largest lesbian, gay, bisexual, transgender and queer civil rights organization; it has more than 1.5 million members and supporters in the U.S. Beyond the CEI survey, the organization works year round to advocate for the LGBTQ community on federal and state government issues.

In 2016, the organization championed the Equality Act, a federal bill that aims to create permanent protections against discrimination based on sexual orientation or gender identity in matters of employment, housing, access to public places, federal funding, credit, education and jury service. In addition, it would prohibit discrimination on the basis of sex in federal funding and access to public places.

According to HRC, more than 200 anti-LGBTQ bills were introduced in states across the country during legislative sessions in 2016. While many of the bills were defeated, states such as Mississippi and North Carolina did adopt discriminatory legislation.

Mississippi’s HB 1523 grants a wide-ranging license to discriminate against LGBTQ people and North Carolina’s HB 2 forbids many transgender people from accessing shared facilities in accordance with their gender identity, among other discriminatory components.

HRC will continue to advocate for these measures to be repealed. In North Carolina, they are working with Governor-elect Roy Cooper and lawmakers in Charlotte, who have promised to enact comprehensive nondiscrimination provisions in their communities once HB2 is repealed.

In Mississippi, HRC organized a “Unite Against Hate” rally in December and commended Judge Carlton Reeves for blocking the bill’s implementation. That ruling is under appeal and could still be overturned as long as the bill is not repealed by Governor Phil Bryant.

“State governments have a clear choice between sowing the seeds of division and discrimination or building an economy that works for everyone by fostering fairness and inclusion,”​ said HRC President Chad Griffin in a news release,​ “Unfortunately, too many lawmakers have decided to target LGBTQ people for state-sanctioned discrimination and to interfere with local protections for workers, customers, and residents. Now more than ever, it is crucial that legislators across the country stand on the right side of history and ensure full equality for all their citizens—nothing more and nothing less.”