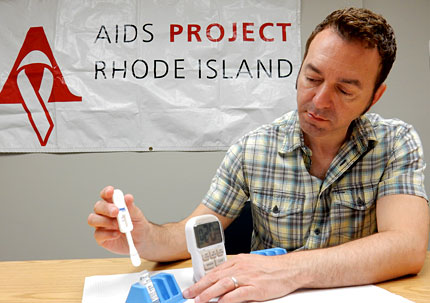 BOSTON, Mass.—As advances in research and care for people living with HIV/AIDS continue to be made—including new forms of treatment on the market—questions continue over what the best options are for prevention, and what those diagnosed can do to maintain optimal health.

“As a gay man, it affects me both personally and as a physician professionally,” said Fenway Health’s President and CEO Stephen L. Boswell, MD, FACP. “It’s a fascinating area of medicine that required almost every skill that a physician could muster, so I think it attracted a lot of young people who were just starting their careers around the time that the epidemic started. I was one of them.” [pullquote]“As someone living with HIV myself, the most important thing I learned early in my treatment was to have hope,” said Sciortino.[/pullquote]

Boswell shared that in the past few years, new tools have emerged that have been added to the methods for prevention.

“Fenway has kind of led the effort with several partners around the world to show that the use of medications, oral medications in particular, taken on a regular basis before you actually get exposed to the virus can significantly decrease the risk of you becoming infected,” said Boswell. “So for high risk people in certain circumstances it definitely makes sense for them to consider the use of these kinds of medications that prevent transmission.”

Boswell noted that these medications are to be used in conjunction with condoms and other safe sex practices that have traditionally been used to prevent transmission, but that using the pill and a condom is better than using just one or the other. Fenway is also currently involved in work with medications that could be given intramuscularly, which would make it even easier according to Boswell, as the shot could be given potentially less frequently, perhaps every three or four months.

“These kinds of approaches are potentially very important to the prevention of further transmission of the epidemic, both here in the United States and internationally,” he said.

As for treatment, Boswell noted that most people use a combination of medications to keep the virus suppressed for very long periods if taken appropriately.

“We generally recommend that once someone has determined that they’re HIV infected, that they start treatment as soon as possible, and that starting treatment early does two things,” Boswell explained. “It significantly decreases the likelihood that they would transmit the virus to others, and two, it preserves immune function in a much healthier state than if you wait until later stages of HIV infection before starting treatment.”

“The most important thing for me when I was first diagnosed was to know and believe that I could, in fact, still live a long healthy life. From day one, it is important to find the support you need, whether it is a friend, or a professional at a place like AIDS Action,” Sciortino said. “Going to a doctor and getting immediately into care was essential to making sure I understood my treatment options and addressed the myths and realities of side effects.”

In addition to medications, complementary and holistic or natural medicines have been used to decrease symptoms from medications and help with other aspects of living with the illness.

“They are usually broken down into categories,” said Christion S. Battey, program coordinator for HIV Testing and Prevention at AIDS Project Rhode Island. “There are biologically based practices which include your daily vitamins, minerals, and herbal remedies; body-based practices, which include massage and reflexology on a monthly basis; energy medicine which consists of Reiki and acupuncture. Finally, you have your mind, body, and spirit techniques which may be utilized in spiritual healing,  yoga, and Tai Chi, to name a few.”

Battey noted patients should consult with their doctor first before implementing these methods into their regular daily activity.

“We generally encourage people who are HIV positive to remain healthy in the ways that we would normally recommend anyone remain healthy, [such as] getting regular exercise, getting regular sleep—at least seven to eight hours of sleep a night—going to bed at roughly the same time, getting up at roughly the same time, eating a healthy diet, avoiding gaining excess weight, and avoiding the excess use of recreational drugs, be it alcohol or any number of other substances,” Boswell said.

As for finding a cure, Boswell noted we are still years away.

“We’ve been doing this work for literally 30 years, and we’ve made a lot of progress, but it’s hard to imagine that we would have a vaccine to either prevent transmission or to improve treatment within the next five to 10 years,” said Boswell.

Boswell shared that the virus works by actually integrating itself into the genetic material of the person it infects.[pullquote] “We generally recommend that once someone has determined that they’re HIV infected, that they start treatment as soon as possible, and that starting treatment early does two things,” Boswell explained.[/pullquote]

“So it becomes very difficult to actually envision with our current science extracting the virus out of somebody who’s infected,” he said. “That would take some very amazing science to do that, and we’re just not there yet.”

However, he went on to say that there has been progress.

“There are many viruses that we encountered in our lives before HIV was ever around, for example chicken pox, that in essence once you’ve had chicken pox you can get over that infection well and actually be very healthy and not have recurrence of the chicken pox, but that virus never leaves your body; it’s still there in a dormant state,” Boswell said. “In essence, that becomes a cure. The person’s still living with the virus, but they aren’t affected by it. So, in that same way, if you consider that a cure, that someone’s still infected with it but its not causing them any problems, in that context I think our goal is to try to use these medications that we’re currently using on an ongoing basis to try to keep the virus under control with this kind of forced way.”

Other research includes looking into people who are known as “elite controllers,” who have immune systems capable of identifying the virus and keeping it in check without medications. Boswell said that these cases are extremely rare, and that researchers continue to explore how this works. He also noted an area of research called mediated immunity, as well as work with neutralizing antibodies.

“I think the most exciting work in the laboratory over the last year or two is really around these antibodies, and a number of classes of antibodies, groups of antibodies, have been identified that appear very capable of keeping the virus in check, so trying to figure out which antibodies do this, how they do it and how we might transfer or create these antibodies in people who are infected is a major area of research right now,” he said.

Boswell shared that Fenway Health was “really the first site to see HIV infection in New England, so we’ve been very involved in caring for people with HIV infection from the very beginning of the epidemic worldwide.” With that experience, Fenway has learned to handle the treatment of HIV at their facilities in a unique way. For instance, Fenway does not run a separate HIV clinic. According to Boswell, they have found this approach to be stigmatizing for patients. Rather, HIV patients are treated along with everyone else. [pullquote]”Take charge and do not let HIV lead your life—you lead the HIV!”—Christion S. Battey, program coordinator for HIV Testing and Prevention at AIDS Project Rhode Island[/pullquote]

“We give care to a lot of people who aren’t HIV positive, and you can’t tell who’s HIV positive or who’s not. They just come here to get their care,” Boswell said. “That kind of care—where you’re not directing people into a funnel of HIV-focused care—we think is the best way to provide care, and interestingly it’s pretty unusual in the United States to provide care that way.

Boswell explained more about how Fenway chose this approach.

“We wanted people to feel welcome. We didn’t want people to be branded with a scarlet letter because they happen to go to a clinic where HIV was the focus of the clinic,” he said. “It’s out of a natural respect of privacy of patients that I think we arrived at this model, and interestingly there’s a huge amount of interest around the nation now to try to copy this model elsewhere.”

Battey shared how AIDS Project Rhode Island helps people with HIV/AIDS, including their “Take Charge, Get Tested!” campaign, offering rapid testing, following up with confirmatory blood tests with their partners at The Miriam Hospital, implementation of a 30 day treatment plan working with doctors, social workers, and specialists in the field, as well as case management services which can consist of nutritional support, clinical counseling, a dental program, and healthcare insurance continuation. They also conduct prevention outreach in the community, making condom distribution available as well as information about the needle exchange program and education about HIV.

“Keep a positive attitude,” Battey suggested. “You need to do what is right and best for you. Moving forward with your life is very individualized. You can go about your daily activities and routines and lead a very long, prosperous and productive life. Take charge and do not let HIV lead your life—you lead the HIV!”

Sciortino shared that AIDS Action Committee provides a wide range of support and services as well, from prevention to connection to care and treatment. They facilitate programs targeted towards at-risk populations, including at-risk homeless youth, gay men and transgender women, and also operate a needle exchange. For people living with HIV, they provide social support, including arranging for peers to accompany clients to medical visits, as well as more intensive case management and mental health services. They also address barriers to getting into care, such as legal issues or housing instability.

“Our number one priority for people living with HIV is to make sure they have the support they need to live a long and healthy life, so whatever a person’s situation, we are here to help,” Sciortino said.

On a personal level, he also offered his own advice for those with HIV/AIDS looking to live their life in the healthiest and fullest way possible.

“As someone living with HIV myself, the most important thing I learned early in my treatment was to have hope,” said Sciortino. “Especially early on, it can be difficult to adjust to having HIV, but there are lots of reasons to be hopeful. Treatment options have improved dramatically, and research into possible cures continues to make progress. And in some ways equally as important as clinical care, you should know there are people who can support you. You do not need to go through it alone, and you can still live a long, healthy, happy, productive life.”