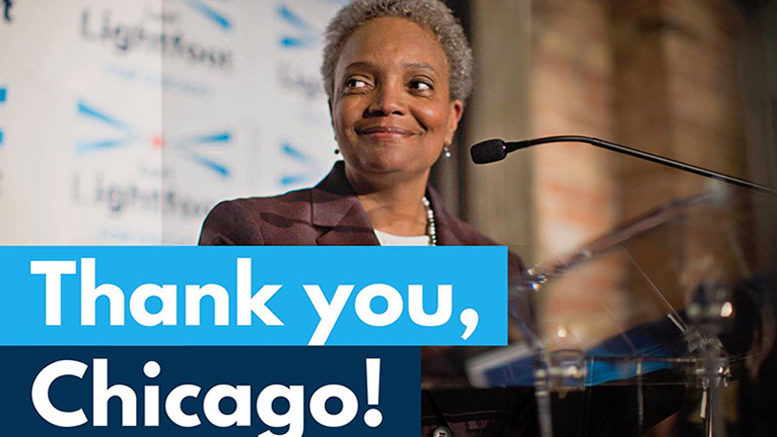 Mayor-elect and former federal prosecutor, Lori Lightfoot, has started her victory lap tour after her big win over Cook County Board President Toni Preckwinkle. Lightfoot is unprecedented because she is not only Chicago’s first black female Mayor-elect but also its first openly LGBTQ Mayor.

“We can and we will build trust between our people and our brave police officers so that the communities and police trust each other, not fear each other,” Lightfoot said in her victory speech. “Out there tonight a lot of little girls and boys are watching us and are seeing the beginning of something … well, a little bit different. They’re seeing a city reborn. A city where it doesn’t matter what color you are and it certainly doesn’t matter how tall you are. Where it doesn’t matter who you love, just as long as you love.”

According to the Chicago board of elections website, Lightfoot, 56 and a Democrat, led Preckwinkle 73.7 percent to 26.3 percent.

As mayor, Lightfoot has pledged to safeguard the civil rights of the LGBTQ community. In Lightfoot’s LGBTQ policy framework, she outlined increasing LGBTQ representation in government by appointing mayoral LGBTQ liaisons, bolstering safety and justice for the trans community by improving police training and thoroughly investigating hate crimes, and addressing the needs of Chicago’s LGBTQ community by creating youth drop-in centers and expanding housing options for seniors and veterans.

Her victory was lauded by LGBTQ organizations.

The third-largest city in America will now be led by a black woman — and an openly gay person — for the first time ever.

Lori Lightfoot, a former federal prosecutor, branded herself as progressive and independent in the Chicago mayoral election. https://t.co/OO30YzFo0z

“… Lori Lightfoot made history as Chicago’s first openly LGBTQ and Black female mayor,” said HRC Senior Vice President for Policy and Political Affairs JoDee Winterhof. “HRC was proud to endorse Lightfoot and help turn out the vote for her historic candidacy. We congratulate Lori Lightfoot on her victory and look forward to working closely with her as the first openly LGBTQ and Black female mayor of Chicago to ensure the city moves forward to be an inclusive and welcoming place for everyone.”

How dominant was Lori Lightfoot's win over Toni Preckwinkle for Chicago mayor? Not only did Lightfoot sweep all 50 wards, but she won virtually all of the the city's 2,069 precincts with the exception of a handful in Preckwinkle's 4th Ward: https://t.co/8tdSEv8GZl #ChiMayor19 pic.twitter.com/odqGQIvbTq

And Lightfoot is not a newbie to politics, especially those pertaining to her city, Chicago. According to CNN, the attorney “has been the interim first deputy of the city’s procurement department, chief of staff and general counsel for the emergency management office and chief administrator of the office of professional standards.”

Lightfoot most recently served as a senior equity partner in the Litigation and Conflict Resolution Group at Mayer Brown LLP. She also served as President of the Chicago Police Board from 2015 to 2018, where she worked to decide disciplinary matters involving all allegations of police misconduct. Lightfoot also held roles as interim first deputy of the Chicago Department of Procurement Services, chief of staff and general counsel of the Chicago Office of Emergency Management and Communications. She also was also an Assistant U.S. Attorney for the Northern District of Illinois, managing large-scale investigations involving political corruption and criminal drug conspiracies. Lightfoot has served on the board of numerous organizations, including NARAL Illinois, ACLU Illinois, Better Government Association and the Center for Conflict Resolution.

According to the Chicago Tribune, her large win sends a message that “Chicagoans want a new direction,” as Lightfoot said to them.

“I think what it signals is that people want a break from that broken political past, and I’m excited about the prospects,” she said.