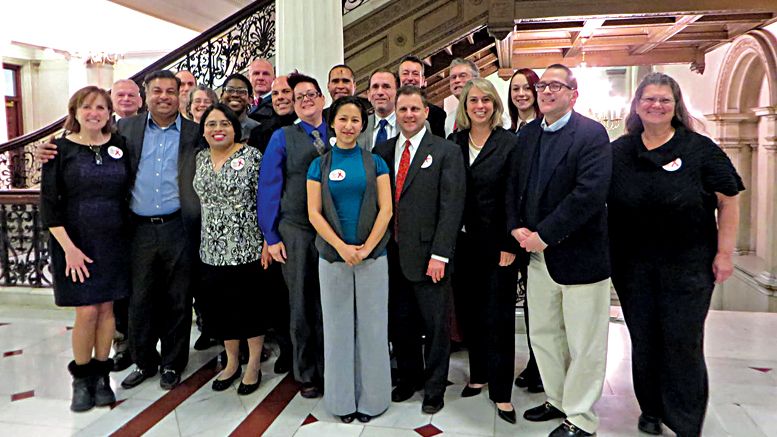 Members of the Treat Lipodystrophy Coalition stand for a photo at the State House in March 2014
Photo: GLBTQ Advocates and Defenders

No more suffering for lipodystrophy sufferers; will now be treated by insurance companies in the commonwealth

After two decades of legal battles, nearly all insured Massachusetts residents will soon be able to receive coverage for medical care for a disfiguring side-effect associated with medications used to treat HIV.

Some HIV-positive individuals who took antiviral medications that entered the market in the 90s developed lipodystrophy, a side effect characterized by facial wasting and changes in the distribution of fat on the body. The condition, according to Boston-based legal rights group GLBTQ Advocates & Defenders (GLAD), can cause spinal malformation, headaches, restricted mobility, mood disorders, and suicidality. Furthermore, advocates of the legislation contend that the changes in body shape, such as the development of fat growths on the back of the neck, stigmatize sufferers of the condition by revealing that they have HIV.

“The issues around stigma, and in particular with long-term survivors that we see …  lipodystrophy is something that not many people talk about or know about, but for the people it impacts, it’s a really serious issue,” said AIDS Action Committee (AAC) Executive Director Carl Sciortino.

Treatment for lipodystrophy typically entails liposuction, which removes the fat growths, and facial fillers, which lessen the effects of facial wasting. Arguing that these procedures are strictly cosmetic, insurance companies have repeatedly refused to cover them. Upon its effective date, the law will require that private insurers, MassHealth, and the Group Insurance Commission, which provides medical coverage to state employees, cover medical treatments for lipodystrophy. The legislation stipulates that coverage extend to reconstructive surgery, dermal injections, and all other “medical or drug treatments to correct or repair disturbances of body composition” caused by the disease.

The passage of this bill—the first of its kind in the nation—is “huge for people with lipodystrophy. It’s also a good win in general for those who want access to healthcare and healthcare benefits, especially people living with HIV and AIDS,” said Deborah Shields, executive director of MEQ.

Through the leadership of legislative sponsors State Representative Sarah Peake (D-Provincetown) and State Senator Mark Montigny (D-New Bedford), the TLC successfully persuaded legislators and Gov. Baker that passage of this bill would greatly improve the lives of those suffering from lipodystrophy.

Representative Peake underscored the consequential nature of the new law.

“The survivors of the early days of the AIDS epidemic deserve to be able to live their lives with dignity and free of the physical and psychological pain inflicted by the side effects of the early antiviral therapies,” she said. “This bill requiring insurance [companies] to cover treatment will ensure that can happen.”

Educating lawmakers about the debilitating impacts of lipodystrophy proved vital to securing the bill’s passage. An independent review of the projected cost of the legislation also buttressed advocates’ efforts, according to GLAD’s AIDS Law Project Director Ben Klein.

In 2014, the Center for Health Information Analysis (CHIA) released a report detailing that the typical member’s monthly insurance premiums would rise by 1 cent to 10 cents if the state were to mandate coverage for the disease. CHIA estimated that between 10 and 25 percent of lipodystrophy sufferers living in the Bay State would seek treatment for their condition.

George Hastie, co-chair of the TLC, is one of the hundreds of people the state estimates will take advantage of the new law. Diagnosed with HIV in 1992, he sought treatment for his lipodystrophy in 2006, but Tufts Health Plan denied his request for surgery to remove a three-pound hump on the back of his neck on the grounds that the growth did not impair his bodily function. An experienced healthcare advocate, he successfully appealed the decision, and a surgeon removed the hump.

The weight the growth applied to his back over several years led to a diagnosis of two herniated discs, causing him to miss months of work. He still deals with chronic pain and expects to seek treatment for his ailments once the new law takes effect.

“For me personally, it’s incredibly exciting after all these years to finally have the [laws in place] so that people can finally access treatment,” he said. “It’s certainly a long-time coming. It’s taken so long to get something done that should have never been an issue in the first place.”

For more information about the new legislation, visit www.glad.org/tlc.