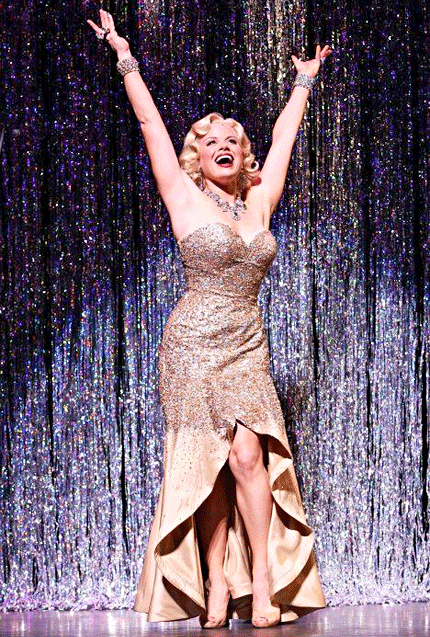 By: The Boston Gay Men’s Chorus*—

It seems as if Megan Hilty is everywhere—not that we’re complaining. From her star turn in Broadway’s acclaimed 9 to 5: The Musical, to NBC’s musical drama Smash, Hilty sang her way into our hearts and there she has stayed. Along the way, she’s guest-starred on numerous TV shows and done voiceover work for a host of animated features. With a recurring role on the Bravo dramaGirlfriend’s Guide to Divorce, a starring slot in the new TV Land comedy I Shudder in the works, and a return to Broadway in the revival of Noises Off scheduled for next year, we’ll be seeing a lot more of the multi-talented Hilty.

Find out what all the fuss is about when Hilty performs in “Broadway @ The Shubert” on Friday, Sept. 18. Hosted by Sirius XM Radio personality Seth Rudetsky, the show will mark the first time the popular “Broadway @” series will come to Boston. With Hilty on stage, expect nothing less than a smash—without the messy drama.

A: I don’t know! I just got cast! Ha! I will say they’ve put together an incredible cast and the script is really funny. My character is a rich, entitled, extremely competitive woman. I’m really excited to get started.

Q: You are probably best known Smash—what’s it like when fans confuse you with your character, Ivy (which must happen all the time)?

A: Yeah―a lot of people expect me to be really mean! Or they think that me and [costar] Kat [McPhee] actually hate each other—which couldn’t be further from the truth!

Q: Can you share some memorable moments from the past 10 years as a performer?

A: It’s hard to only pick a couple of moments. The things I always remember the most are the people I work with. Most of them are incredible people who have turned into lifelong friends. The few who didn’t make that list are the ones who I saw treating people badly. They’ll stay with me, too—as lessons on how not to behave! [pullquote]While there has been a lot of wonderful progress for the rights of the LGBT community, we still have a lot of work ahead of us. I have a deep love and respect for my friends who unfortunately face discrimination on a daily basis so, of course, I try to help out whenever I can. —Megan Hilty[/pullquote]

Q: You have done a lot of television, voiceover work, and stage performances. Do you have a preference for one over the other, or favorite aspects of one versus the other?

A: I just love working in general. And I love all three mediums for different reasons. But there is something particularly wonderful about voiceover work that is extremely artistically fulfilling. There really are no limits to what you can try! I always look forward to those sessions.

Q: You trained initially for opera, but made your career in musical theater. How did you make that choice?

A: I just felt that musical theater was a better fit for my personality. I still have a not-so-secret dream of performing in an opera one day though!

Q: You have performed at many benefits for LGBT organizations as well as AIDS fundraisers. What is your connection to the LGBT community?

A: While there has been a lot of wonderful progress for the rights of the LGBT community, we still have a lot of work ahead of us. I have a deep love and respect for my friends who unfortunately face discrimination on a daily basis so, of course, I try to help out whenever I can.

Q: Are there any performers who have influenced you in significant ways?

A: I’ve always looked up to Bernadette Peters. She is a singular talent and happens to be the nicest woman on the planet.

Q: Aside from I Shudder, what other projects are you working on?

A: Well, I’ve been working on Girlfriend’s Guide to Divorce as a recurring character which has been SO much fun! I’m doing a ton of concerts with my husband and band all over the place, I’ve got a Rosemary Clooney concert I’m working on with the Cincinnati Symphony Orchestra in November and shortly after that I go into rehearsal for Noises Off on Broadway! All while working on my favorite project—raising my one-year-old daughter with my amazing husband.