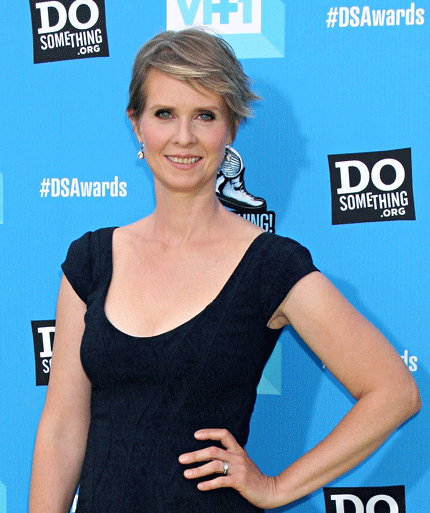 Cara Delevingne has a lot of acting jobs now

It’s more likely that you know Cara Delevingne from seeing her modeling in the pages of Vogue, or from her appearance in Taylor Swift’s “Bad Blood” video, than from her starring role in the little-seen summer film Paper Towns. (Let’s just say not a lot of tickets were sold.) But you’ll be seeing a lot more of the bisexual British actor – she’s currently dating acclaimed singer-songwriter St. Vincent – in the coming year. Right around the corner is the Peter Pan adaptation, Pan, with Hugh Jackman; the Johnny Depp-starring crime-thriller London Fields, which is based on the Martin Amis novel; and she’s playing “Enchantress” in the highly anticipated 2016 DC Comics film Suicide Squad. Not that you’ll be missing Ms. Delevingne in the modeling world anytime soon. She’s still very young, after all, and that’s a gig that’ll last until you turn, say, 25. After that, it helps if you’ve got movie stardom to fall back on. It looks like she will.

Josh Mond. You don’t know that name. It’s OK. He co-produced the acclaimed Martha Marcy May Marlene, and has just completed his debut feature, James White, which premieres at the Toronto International Film Festival in the Discovery Programme, and has already received the 2015 Sundance “Best of Next” Award. You do know Cynthia Nixon, however, and she’s one of that film’s cast members, alongside up-and-comer Christopher Abbott (Girls), Ron Livingston, musician Scott “Kid Cudi” Mescudi and Mackenzie Leigh (Gotham). The story revolves around a a self-destructuve young man’s coming of age, and it’s earning the kind of buzz first-time filmmakers dream of getting. After its bow in Toronto, look for a November release for the serious-minded drama, just in time for those brooding winter months.

The “Favorite Homosexual Award” doesn’t exist, but if it did, we’d want to give it to Stephen Fry (Wilde) every day of his life. The British comic actor and writer is hilarious, wickedly clever, confidently old and paunchy, and, best of all, possessed of a steadfast refusal to suffer right-wing fools. So it’s always nice to hear about him working in something worthy of his talent. That would be the new comedy from James Oakley, The Brits are Coming, co-starring Fry alongside Tim Roth, Uma Thurman, Parker Posey, Maggie Q and Alice Eve. Roth and Thurman play an eccentric con-artist couple in debt to gangster boss Maggie Q. After being sold out by former associate Fry, the pair have to stage a jewel heist to dissuade Q from, you know, murdering them. The movie is currently shooting in New York and due sometime in 2016.

Acclaimed indie filmmakers Zal Batmanglij and Brit Marling (Sound of My Voice) are moving to Netflix. This makes perfect sense, of course, as the pair represent a kind of Hollywood refusal. Their movies have stubbornly resisted fitting into big studio marketing plans, and that’s exactly the kind of filmmaker Netflix programming has championed, resulting in the network’s critical and commercial success. Their upcoming series is called The OA, and the details are fairly secret, but we do know that it stars writer-actor Marling. We’ve also learned that a casting call is out for a teenage, Asian, transgender male, a person who will be carrying the weight of a major role in the project. Hollywood casting offices are not exactly clamoring to see young trans actors, so the role will most likely be filled by an unknown. But if you want more happy evidence that Time magazine’s “Trans Tipping Point” headline is becoming reality, here it is. And look for the show on Netflix in mid-2016.

*Romeo San Vicente pretty much invented the practice of “Netflix and chill.” He can be reached care of this publication or at DeepInsideHollywood@qsyndicate.com.