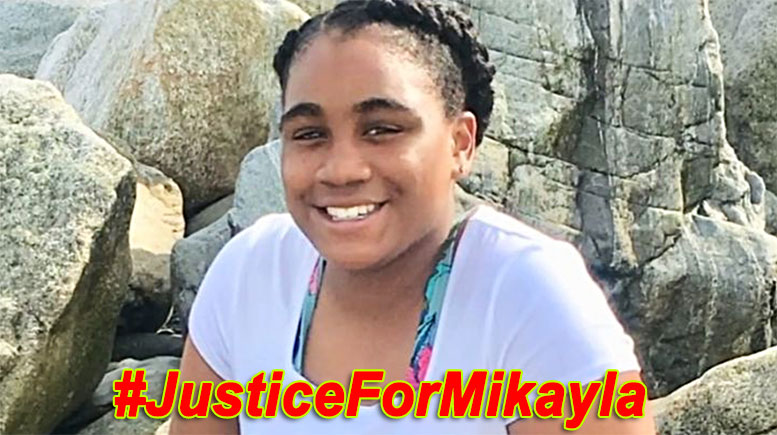 HOPKINTON, Mass.—A month after Mikayla Miller, a black LGBTQ+ teenager, was found dead in Hopkinton, tied to a tree — belt around her neck — her case locally, as her mother said, has gone nowhere. Mikayla’s mother wants an independent investigation to uncover the truth about what happened to her daughter and the list of people wanting the same continues to grow.

Mass. Governor Charlie Baker in a recent interview said he would support such an investigation too. (See what other prominent figures in the commonwealth support the call for an independent investigation below in this story).

“I would support whatever it takes to get to the bottom of this and to give a grieving family confidence that their daughter’s life has been treated with the grace and the kindness and the respect that it deserves,” Baker told hosts Jim Braude and Margery Eagan on Boston Public Radio. “If [an independent investigation is] where people think we need to go, then yeah, I would support that.”

Mikayla, 16, died on April 18 in her suburban hometown, one day after her mother, Calvina Strothers, said she was jumped by a group of five white teenagers.

Strothers wants answers from a police department in a town known to be affluent and whose population of 15K — according to the Census 2010 — is mostly white. The town is about 30 miles west of Boston and is known as the place where the Boston Marathon starts each year.

According to a former statement by Strothers, the police showed little interest in investigating Mikayla’s death from the start and allegedly threatened Strothers with exposing her daughter’s sexuality publically if she reported the matter to the media. A press release by the National Black Justice Coalition, NBJC, stated that Strothers believes that a similar case involving a white child would have received immediate attention.

Much has been written and said about the current U.S. law enforcement system’s foundation as one originating from a systemic racist structure that has often left crimes perpetrated against people of color — black people more so — unsolved.

“To be clear, the legal system in America remains deeply unjust,” Mass. Representative Ayanna Pressley, said in a former press release about this topic.

On May 5th, Pressley tweeted that she supported Strothers’ call for an independent investigation to look into what happened to Mikayla in Hopkinton.

“Mikayla Miller deserved to grow old. She had so many basketball games, road trips, and HBCU homecomings ahead of her. She deserved childhood — uninterrupted,” Pressley tweeted on May 5th. “There needs to be a full, transparent, independent investigation into her death.”

Hundreds of people rallied while chanting “say her name” and holding signs reading “Black Lives Matter” for yet another black life taken in the country, but this time the site of such a crime hits closer to home. Former City Councilor Tito Jackson and Violence in Boston and now the family’s spokesperson, Monica Cannon-Grant, led the rally, according to WBZ Boston.

“I don’t want to be a vigilante in this; I don’t want to have to spend all day on the phone getting and passing along evidence in order for justice to be served,” Strothers told the attendees, according to CBS Boston. “What I want is for the criminal justice system to work.”

“[Mikayla] Miller’s mother has stated that police told her not to go to the media because doing so would ‘out’ her daughter as LGBTQ. Such an allegation is appalling,” said GLBTQ Legal Advocates & Defenders, GLAD, Senior Staff Attorney Polly Crozier via a statement on May 7. “As Ms. Strothers said at the vigil and rally yesterday, Mikayla’s LGBTQ status was known. She was a much-loved and cherished child in all of her many dimensions. Anti-Black and anti-LGBTQ violence and discrimination destroy lives and devastate communities. We must address it swiftly, seek accountability and work relentlessly for change.”

Other organization officials also issued similar statements and support a few days prior.

Middlesex District Attorney Marian Ryan held a press conference earlier this month in which she stated that Mikayla’s cause of death had not been determined and that the investigation into both Mikayla’s death and her assault the day before is ongoing. Ryan denied the case was neglected because of Miller’s race or sexuality.

Yet, for a black woman and a mother, the case is representative of something else and the fact that she is still waiting for answers reinforces those thoughts.

In tears, she noted what she had to do while also mourning her child’s death— a loss that was heightened by the circumstances surrounding it, the way in which her daughter died, and how it was allegedly treated by local authorities.

Ryan said they were exploring all leads in the case earlier this month. As of last week, they still did not have answers about it.

Miller was last seen on April 17 and had allegedly been in a quarrel with a group of teen boys and girls, Ryan said to another publication. The incident, though reported to the police, was not investigated, according to a Hopkinton Police public blog. The teenager was supposedly having a romantic relationship with one of the girls, reported Boston’s Fox News. Strothers mentioned that she thought her daughter had been persuaded to go out with them that night.

Besides Congresswoman Presley’s calls for an independent investigation into Mikayla’s death, there are others who are asking for it too. Ibram X. Kendi, head of Boston University’s Center for Antiracist Research, Somerville Mayor Joseph Curtatone, Representative Liz Miranda, Senator Edward J. Markey, Senator Elizabeth Warren, Mass. Governor Charlie Baker, and state Senate President Karen Spilka have all asked for the same, reported the Globe. Other organizations have added their names to the list too.

Cannon-Grant said that Violence in Boston would cover the cost of an independent autopsy for Miller.

EDITOR’S NOTE: Other resources for media companies dealing with members of the LGBTQ+ and/or trans or nonbinary community can be found at GLAAD, where the organization explains the proper reporting (with dignity and respect) of members of this community. A former story about Mikayla Miller can be found here.