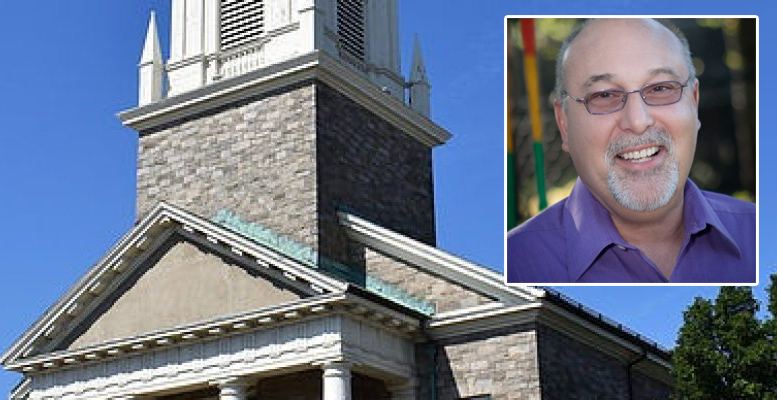 A local pastor’s ministry that brings solace, healing and acceptance to and beyond the U.S.

SALEM, Mass.—After what could have been a demoralizing experience when the United Methodist Church asked him to leave after 17 years of service once it was revealed that he was gay, Reverend Joe Amico turned it all around and found himself doing exactly what he was meant to do: help and guide others in the LGBTQ+ community in the U.S. and abroad.

The openly gay pastor at Salem, Massachusetts’ Tabernacle Church, a United Church of Christ (UCC) congregation, belongs to the Salem Rotary Club, is the Religious Liaison to Salem No Place for Hate Committee, serves on the Committee on Ministry for the Northeast Association for the UCC, and is a member of the clergy caucus of the Essex County Community Organization (ECCO). In addition, he is a Licensed Alcohol and Drug Counselor (LADC-I), serves as Vice President of NALGAP (The Association of Lesbian, Gay, Bisexual, Transgender Addiction Professionals and Their Allies), and is on the Editorial Board of Addiction Professional.

For 10 years, Rev. Joe was a part of the Pride Institute, the nation’s first inpatient substance-abuse treatment facility specifically for the LGBTQ community. He was also an Associate Conference Minister for the Southwest Conference of the UCC where he worked collaboratively with the Congregational Christian Church of Mexico to create a Church Without Borders in El Paso, Texas and Ciudad Juárez, Mexico.

Crossing borders and spreading a message of love and acceptance, Rev. Joe recently brought his compassion and expertise to Bermuda’s LGBTQA community. After being splashed across front-page Bermudian headlines, The Rainbow Times caught up with this trailblazer to talk his Bermuda trip, addiction within the LGBTQ community, faith, civil rights, Trump and his upcoming plans.

The Rainbow Times: Can you tell us more about when you were forced to step down at the UCC, exactly what did you do and how did that impact you?

Rev. Joe Amico: It was a devastating experience at the time. I thought I would always be a pastor and thought, what does one do with 17 years’ experience and an M.Div degree? While serving a church in a small Wis. town, I also served part-time as Chaplain at an adolescent alcohol and drug program. Because it was run by the Volunteers of America, which is organized legally as a church, I was able to keep my clergy credentials in the UMC until I later transferred them to the UCC, my current denomination, which ordained the first openly gay man in 1972. Looking back, I realize that had I not been forced out of the ministry at that time, I never would have had the wonderful opportunities I’ve had as an addiction counselor to do the trainings on LGBT issues, which have taken me all over the U.S., Europe and Bermuda! God moves in mysterious ways!

Q: You’ve had a great deal of impact on the LGBTQ community in Bermuda. Why Bermuda and not somewhere else?

Rev. Joe Amico: I was invited by Bermuda’s Department for National Drug Control to do a training on LGBTQ+ issues for professionals.

Q: What is the best way to describe your services specifically addressing the needs of the LGBTQ community at home and abroad?

A: I’ve been doing workshops and training on LGBTQ+ issues for professionals for 30 years here in the U.S. and Europe. I started as a counselor at Pride Institute, the first inpatient substance abuse program specifically for LGBT clients, three years after it opened in 1989.

For 8 years, I was the President and currently serve as Vice President of NALGAP. NALGAP was instrumental in getting our government to publish A Provider’s Introduction to Substance Abuse Treatment for Lesbian, Gay, Bisexual and Transgender Individuals. Subsequently, we got the Substance Abuse Mental Health Services Administration (SAMHSA), to publish a training curriculum, which I now teach at national conferences, agencies or wherever else I get invited.

Q: Addiction is so prevalent in the U.S. in the LGBTQ community. Why do you think that is?

A: There are a number of studies that have been conducted. Most demonstrate that addiction in the LGBTQ+ community is three times higher than in the general population. There are a lot of theories as to why. Recent research has shown that both the tobacco and alcohol industry targets the LGBTQ+ community. When I first got into the field as a chaplain in an adolescent facility, one of the counselors used to warn the kids, “You hang around the barber shop long enough, you’re going to get a haircut.” For many years the only place queer folk had to meet each other were the bars, so if you had the biological propensity to become addicted, it stands to reason that folks would get addicted at a higher rate. However, I tell my addiction professionals nothing drives addiction more than shame. So many in our community suffer stigma and shame for being who they are, so they turn (unconsciously perhaps) to alcohol and drugs as a coping mechanism.

Q: What inspired you to become a reverend?

A: As an adolescent, I was struggling with so many issues including my sexuality. I found my church to be a place where I was accepted and affirmed and decided I wanted to be a minister so I could help others feel that same acceptance and affirmation.

Q: Overall, do you find Bermuda to be open and affirming of the LGBTQ community? If so, or not, how does that impact services and support available to locals?

A: The Drug Prevention Officer invited me to train professionals because she recognized the problem there. As one of my taxi drivers pointed out, the island is so small and folks are so interrelated to each other that everyone knows everyone and everyone’s business! Prior to my training, the government had approved same-sex marriages. Shortly after my training, the governor got it reduced to civil unions. It’s a hot topic in Bermuda. When I told my trainees that I was hesitant to come to Bermuda because of their anti-gay reputation, some of them were astonished saying, “But we are so welcoming here.” Then others spoke up saying, “Don’t you remember, we turned the gay cruise ships away from our ports?”

I was asked during my sessions how could I, as a Christian minister, justify what I was teaching in the curriculum? While in Bermuda, I met with the leadership of OUTBermuda. They told me that the majority of the churches there are very conservative and therefore anti-gay, which influences the community values greatly.

There aren’t any LGBTQ+ specific services of any kind. There are no LGBTQ+ specific social organizations. As I chatted with OUTBermuda, they realized the need for organizing and supporting more events for the community.

Q: With the current abuse of immigrant children and families being separated at the border and thousands of children “lost,” what is the best piece of spiritual advice you can give to the immigrants being targeted and the citizens who are trying to help?

A: Jesus family was an immigrant family! Jesus was born in a foreign land and they had to flee their home twice because of the Roman government. Our faith history is filled with stories of holy people who were immigrants and we are reminded over and over again in scripture to welcome the stranger and to feed and clothe them. My denomination has declared itself an Immigrant Welcoming Denomination and the Mission Action Group at Tabernacle is currently writing a similar declaration for us as a congregation.

Q: Describe yourself in 3 words.

A: The kids at that adolescent facility dubbed me “Captain Serenity.” I like that title for two words! Compassionate would be my third.

Q: With the state of the nation, what are the three most important issues that you think people should be focusing on right now?

A: Immigration reform, gun control, and justice for all (especially LGBTQi+ and women).

Q: Considering the massive devastation and discrimination against marginalized groups in the country, if you could give Trump a direct message, what would it be?

A: That’s a toughie because he doesn’t care or listen to anyone who doesn’t think as he does. I’m heartbroken that our country has allowed him to get away with the atrocities he has done in his short time as President. In our service for Independence Sunday, we prayed “that those who are elected to govern and lead, would be guided by you (God), and be ever aware of the trust that has been given them.” He’s broken the trust of so many. I do believe in the power of prayer and the power of the people. It was huge that he reversed his decision about separating families because of the power of people. I pray he keeps listening.

Q: What do you think is the biggest misconception people have regarding faith and sexuality/gender identity?

A: Unfortunately, so many LGBTQ+ folks have had such negative experiences in churches that are sex negative and anti-gay that they lump all religions into that framework. There are more and more open, affirming, welcoming religious groups these days and I would hope more LGBTQ+ folks would seek us out and give us an opportunity to provide a spiritual home for them. I’ve written articles on the effects of what I call spiritual abuse. Those who’ve experienced abuse from the pulpit, being told they are an abomination or going to hell unless they change, need to find a way to heal from that abuse.

Rev. Joe lives with his partner of 27+ years, has two children, one stepson, and four grandchildren. He can be reached by phone at 978-744-3164 or by e-mail at revjoe@tabernaclechurch.org.

The Tabernacle Church, an open and affirming congregation of the United Church of Christ, is located at 50 Washington St. in Salem, Mass. Visit tabernaclechurch.org for more information.

1 Comment on "Ministry Beyond The Church: Rev. Joe Amico"