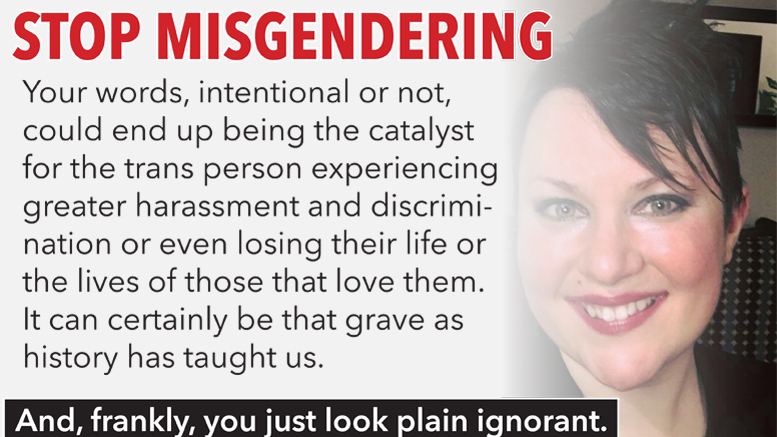 My intensely personal experience with the transgender community, in the most intimate way possible, has made me keenly aware of how damaging societal constructs, personal bias and blatant carelessness toward gender-identity can be, whether intended or not.

I’ve witnessed the destruction, chaos, and first-hand despair that those involved in a transgender person’s life can cause—whether it be through a personal relationship, business relationship or as an acquaintance at the supermarket. Such turmoil can be caused by things that the cisgender world thinks is a simplistic mistake. Yet, one of those “simplistic mistakes” can literally mean the difference between wellbeing and even death.

Misgendering a person who’s transgender may not seem like a big deal for those responsible for the misgendering, but such careless actions often wreak havoc on the psyche of the transgender affected individual. That damage can lead to decreased self-worth and self-esteem, a feeling of invisibility of living as their authentic selves, which could lead many in this community to experience increased depression and even suicide. That doesn’t even include the peril one puts a transgender person’s life is when this misgendering occurs in front of others that could be transphobic or wish to do harm to the trans person. Something as “simple” as misgendering isn’t so simple after all. The more that I’ve witnessed this, the more pain I see trans people suffer through because of the thoughtless behavior of others, and the more outraged I become, especially with something as “simple” as misgendering.

Misgendering comes in two forms, according to David Moulton, a registered therapist and Canadian certified counselor—intentional and unintentional.

“Intentional misgendering is when a person knowingly refers to another individual by the wrong gender,” he said via a report for the Durham College Chronicle. “For example, if a person identifies as ‘he’ and would like to be called as such, but another person refuses and calls the individual she, that is misgendering. Unintentional misgendering happens mostly by accident. For example, going to a Wal-Mart and referring to the cashier by ‘Sir’ but really, her gender is female.”

The Chronicle reported, that as many as “77 percent of trans respondents in an Ontario-based survey had seriously considered suicide and 45 percent attempted suicide,” as per the Canadian Mental Health Association. In the United States, the suicide rate is not far behind at 41 percent. Many people are aware of these kinds of statistics, but yet, I wonder if anyone actually considers why a person may choose to take their own life and the impact that their own actions may have on the transgender person?

Excuses only please you

Over the last 15 months of transitioning with my loved one, I’ve grown increasingly impatient with others and outraged by carelessness, to be precise. Countless times, we’ve been told, “You have to give me time to get used to it,” “I keep forgetting because I knew you before” and other excuses ad nauseam. It doesn’t mean that at the beginning of a personal transition people around aren’t allowed to ever make a mistake. However, when it is the same people repetitively misgendering and misnaming someone regardless of explanations, corrections, education, and patience extended, 15 months is long past the acceptable time frame, especially when another person’s well-being and safety are at stake. Throughout these last several months, it’s become glaringly obvious to me why many trans people choose to move away from their former homes and communities. It’s just too painful and dangerous at times—even with something as “simple” as misgendering.

Simply recognizing a person’s gender identity and respecting who they are by merely getting their pronouns and names correct goes a long way at starting to resolve this epidemic in the trans community. It starts to build confidence in authentic living and sends a message of acceptance and value for who transgender people are as individuals. It really is not a difficult concept, so why do so many have difficulty with it? And, I’m not referring to transphobic people only here. I am thinking of countless others who are self-proclaimed “allies” of the community that have continually gotten it wrong, repeatedly.

A 2014 study in the journal, Self and Identity, researchers asked transgender people about misgendering and their experiences around it.

“It’s deliberately disrespectful and undermines the new self the individual in transition is building,” explained Moulton. “It also can be discouraging and can lead someone to believe they shouldn’t transition. Constant misgendering is very discouraging and gives gender dysphoric people a feeling of desperation and hopelessness.”

Not only does the misgendering impact the personal well-being of the transgender person and those who love them, it literally affects the physical safety of such a person as well.

If you misgender someone in front of others or you publicly out someone as being trans, you run the risk of physically putting their lives in danger. While to you personally, being trans may not be a reason to harm someone, to others, it is a green light or justification to do so in some sick and demented way. To be clear, it is no one’s right or responsibility to “out” someone in public or privately behind closed doors. It’s a trans person’s right and their right alone to decide if and when they tell others that they’re transgender, or even if they want to be out in the first place. Doing so is hurtful, disrespectful and humiliating in many instances.

Your words, intentional or not, could end up being the catalyst for the trans person experiencing greater harassment and discrimination or even losing their life or the lives of those that love them. It can certainly be that grave as history has taught us. Otherwise, there would be no need for the Transgender Day of Remembrance (TDOR).

Though trans women of color are, without a doubt, grossly and disproportionately affected by anti-trans hate-based violence that often leads to death, the Advocate reported that there is invisibility in the types of violence experienced by the trans community in its entirety such as “sexual assault, domestic violence, and stalking.”

The author of this piece asserts that there is a critical component missing regarding the victims of anti-trans violence.

“The sources of statistics on anti-trans violence mostly come from the Transgender Day of Remembrance list and the National Coalition of Anti-Violence Programs’ annual hate violence reports, which for the past few years have been able to report on the presumed gender identity, sexual orientation, and race of the victims who come to their attention,” he wrote. “It is important to note that both of these compilations rely almost exclusively on what is reported by the media—in other words, what mainstream reporters hear about and think is worthy of an article or broadcast. And data does, indeed, show that trans women of color are far more at risk of being murdered than other trans or LGB people.”

GLAAD wrote that context is critical. “The National Coalition of Anti-Violence Programs reports an alarming multi-year trend showing that trans women of color experience a greater risk of death by hate violence than any other group,” its website read. “The staggering levels of poverty transgender people face can put them in unsafe situations, and sometimes lead to their participation in the street economy.”

In addition to being transgender, the intersection of identities compounds experiences based on hate and discrimination such as race, ethnicity, and sexism which contribute to systemic and institutionalized oppression.

According to the author published in the Advocate, there is more violence against the transgender community than what is commonly reported.

“What is far less discussed by the media or within the trans/LGB community is that other types of violence—the kinds of violence that affects thousands more trans people than do hate crimes resulting in murder—actually happen at least as often to transmasculine individuals as transfeminine individuals,” he found via a FORGE study.

A national study in 2011 that was approved by the Morehouse College School of Medicine Institutional Review Board and funded by the Office for Victims of Crime, found that transmasculine individuals were actually more likely to be victims of childhood sexual assault, adult sexual assault, dating violence, domestic violence, and stalking than were transfeminine individuals. “… trans women were more likely to be victimized by hate violence …”

The survey was answered by 1,005 trans-identified people. According to the Advocate, “30 percent of trans women reported having experienced hate violence, compared to 29 percent of trans men.”

Nearly all individuals whose gender identity does not match their assigned sex at birth have been misgendered either intentionally or by accident. You’d be hard pressed to find a trans person who hasn’t experienced this type of dismissal of their identity.

While misgendering someone may be a simple error that is no big deal to some, the transgender community does not have time to wait for you to catch up. It is their life, the lives of their families and their loved ones, and the risk of it all being taken away in one form or another, while they wait—while we wait, for you to inform yourself about one “simple,” not so simple mistake.

*Nicole Lashomb is Editor-in-Chief of The Rainbow Times & Co-Founder of Project Out, a non-profit organization dedicated to the transgender community through providing life-saving services and financial assistance. She holds an MBA from Marylhurst University and a BM from the Crane School of Music (SUNY Potsdam). Nicole can be reached at editor@therainbowtimesmass.com.

[This column was originally published on the Sept. 6, 2018 issue of The Rainbow Times].