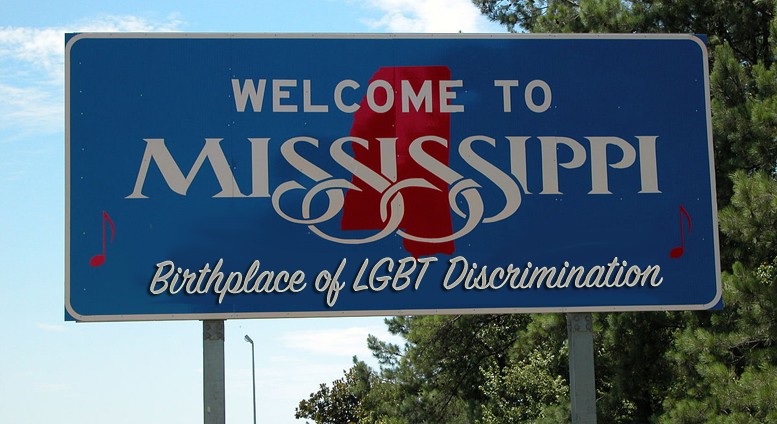 HB 1523, or the so-called “Religious Liberty Accommodations Act,” allows almost any individual or organization to use religion as a justification to discriminate against LGBT Mississippians in some of the most important aspects of their lives, including at work, at school, and in their communities.

Upon news that Mississippi Governor Bryant has signed the discriminatory House Bill 1523 into law yesterday, several national organizations immediately reacted to it.

The HRC lambasted the Governor for signing into law HB 1523. National corporations and businesses have spoken out against the horrific measure, that would allow individuals, religious organizations and private associations to use religion to discriminate against LGBT Mississippians in some of the most important aspects of their lives, including at work, at schools, and in their communities. Following Kansas and North Carolina, Mississippi becomes the third state this legislative session to sign into law an explicitly anti-LGBT bill.

Some of the state’s largest employers, including Nissan Group of North America, Tyson Food Inc, MGM Resorts International, and Toyota publicly voiced their opposition to the appalling legislation, joining national corporations such as AT&T, IBM, Levi Strauss & Co, MassMutual, General Electric, and Hyatt Hotel Corporations. In a previous statement, Jay C. Moon, President and CEO of the Mississippi Manufacturers Association (MMA) called for Governor Bryant to veto the measure saying: “It is clear that many of our members find that HB 1523 would violate their corporate policies expressly providing for an inclusive workplace environment that supports diversity. This is not a bill that the MMA supports and we hope that it will not find its way into law.”And last week, the Episcopal Diocese of Mississippi released a strongly worded statement condemning the bill as well.

“Gov Phil Bryant adds his name to a list of disgraced Southern governors by signing this hateful and discriminatory bill into law,” said HRC President Chad Griffin. “Governor Bryant refused to meet with LGBT people and even turned us away at the door of his office. He refused to listen to business leaders. He refused to listen to Mississippians. And now his state will suffer because of his ignorance and failure of leadership. Just as we’re doing elsewhere, we will continue to rally fair-minded voters, businesses, and civil rights advocates to repeal.”

At a rally Sunday evening, before the signing of HB 1523 into law, outside the governor’s mansion, HRC President Chad Griffin joined HRC Mississippi, the ACLU of Mississippi, Southern Poverty Law Center, Planned Parenthood Southeast, Gulf Coast Equality and hundreds of advocates from across Mississippi urging Governor Bryant to veto HB 1523. Earlier, HRC requested that the governor meet with LGBT Mississippians, but that call has gone unanswered—and advocates were turned away from his office. Speaker Philip Gunn also refused an HRC request that he meet with the LGBT community before yesterday’s final vote on the discriminatory bill.

Under this new law, religion could be used by most (any individual or organization) to justify discrimination against LGBT people, single mothers, unwed couples and others. Tax-payer funded faith-based organizations could: refuse to recognize the marriages of same-sex couples for provision of critical services including emergency shelter; deny children in need of loving homes placement with LGBT families including the child’s own family member; and refuse to sell or rent a for-profit home to an LGBT person—even if the organization receives government funding. It would also give foster families the freedom to subject an LGBTQ child to the dangerous practice of “conversion therapy,” and subject a pregnant unwed girl to abuse, without fear of government intervention or license suspension. It would even allow individuals to refuse to carry out the terms of a state contract for the provision of counseling services to all eligible individuals, including veterans, based on the counselor’s beliefs about LGBT people or single mothers.

Wade Henderson, president and CEO of The Leadership Conference on Civil and Human Rights, issued the following statement after hearing about HB1523’s passage to allow discrimination against LGBT people on religious grounds. The Leadership Conference Education Fund recently issued a report called “Striking A Balance: Advancing Civil and Human Rights While Preserving Religious Liberty” that documents how religious arguments are used to deny civil and human rights to people of color, women, people with disabilities, immigrants, and LGBT people:

“Today, Governor Bryant turned back the clock to a dark time in Mississippi’s past.

Religious liberty is meant to be a sacred shield to protect people from discrimination, not a sword to deny civil rights and equality to others. These are the same arguments used to oppose women’s suffrage, interracial marriage, the acceptance of Asian immigrants, the Americans with Disabilities Act, and the abolition of slavery—today they are being used against the LGBT community.

There’s no place for a measure like this if Mississippi aspires to move past its legacy of discrimination.”

In addition to all of the discrimination occurring because of HB1523, schools, employers, and service providers could all refuse transgender people access to appropriate sex-segregated facilities consistent with their gender identity—all in direct conflict with the U.S. Department of Justice’s enforcement of federal law. HB 1523 even legalizes Kim Davis-style discrimination by allowing government employees to abdicate their duties and refuse to license or solemnize marriages for LGBT people.

“It’s embarrassing, shameful, and truly perplexing that the Republicans still don’t get it. LGBT Americans are entitled to equal protection under the law, just as everyone else. No exceptions. No allowances for discrimination. That we’re even still debating this in 2016 boggles the mind.

“‘Right to Discriminate’ measures signed into law by Republican governors are proof that the Republican Party’s leaders are stuck in the dark ages when it comes to equality and that they’ve been on a divisive path toward destruction since long before Donald Trump ran for president. In fact, the Republican National Committee has passed resolutions calling on state legislatures to pass discriminatory ‘bathroom bills’ targeted at LGBT youth and calling on Congress to pass a national ‘Right to Discriminate’ law that they cynically call the First Amendment Defense Act.

“No American should be discriminated against because of their sexual orientation or gender identity. That’s not very complicated, and that’s not who we are as Americans. It’s long past time for the Republicans to get the message.”

[From a compilation of several releases]