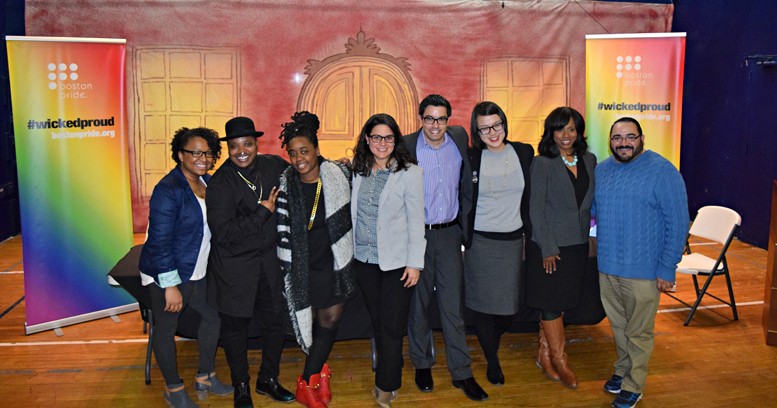 As part of a series addressing identity and intersectionality, Boston Pride, Black Pride, and Latin@ Pride held a community forum in late March to open a dialogue about race, sexuality, gender identity and privilege.

“The initial goal of the forum was to provide a platform for the community to come together and openly discuss some of the key issues affecting the POC [people of color] community, especially that of the trans* POC community,” said Charlene Charles, a Boston Pride board member and lead coordinator of the forum.

Moderated by Boston City Councilor Ayanna Pressley, the forum began with each panelist discussing the intersection of their identities and community relationships.

Panelists discussed at length how they operate in the world based on their identities, but also acknowledged their relative privilege.

“It’s … important to be mindful of how I navigate the world … as a femme-presenting, cisgender person and not a lot of [trans] people have that privilege,” said Freeman, acknowledging that she won’t be questioned for using a women’s restroom or fitting room or be scrutinized for wearing a dress, unlike many trans women who may be harassed or assaulted for doing the same things.

“Being a doctor is a huge privilege. I was privileged to have a family to support me and get the education that I have now,” said Dr. Tat. “You think about the difficulties a lot of trans people go through and I have the privilege of having a steady job and being in a great community full of family and friends … Being trans is the best thing that has ever happened to me because … it has forced me to check my privilege in a way I had never done prior to my transition.”

Dr. Bailey spoke of his privilege as a well-educated, transmasculine man and how that privilege gives him a voice where others may not have one.

“I oftentimes get invited to add my voice to conversations, and I really appreciate that,” said Dr. Bailey. “But I also know that there are definitely other folks in the community who don’t have degrees or accolades, but have just as valid experiences … [I have to] utilize that space to lift up women and girls and the oppression that happens to women and girls …”

The panel also discussed the issue of discrimination and judgement in communities of color.

A hot-button issue at the forum was the public accommodations bill currently before the state legislature. If passed, the bill would ban discrimination against transgender people in public spaces such as hospitals, coffee shops, retail stores, public parks, and other venues open to the public.

“We’re not where we should be on trans rights in Massachusetts,” said Dr. Tat. “We were the first state to legislate gay marriage, but we’re so behind on civil and public accommodations for people like me. My top priority now is to bring light to this issue, do a lot of grassroots work, promote this bill and push this bill through the State House [to] get Governor Baker to sign it.”

“We actually need to think about the follow-up regarding [the bill],” said Dr. Bailey. “We need to make sure that this law is inclusive of all trans people … We need to think about public accommodations, which are already being talked about in a very binary way, to include folks who don’t fit [into the binary].

“I’m wondering where is the trans leadership on a state and local level,” Dr. Bailey continued. “There needs to be much more engagement and employment of trans people who can sit at the table while decisions are being made … It’s very disappointing to me that we’re going to invest in more prisons, but we’re not going to invest in healthcare.”

During the question and answer session, an audience member brought up the controversial #WickedPissed protest that occurred at the Boston Pride parade last June (http://goo.gl/cY5790). The 11-minute protest was organized by several LGBTQ activists of color demanding for more resources to be provided for LGBTQ people of color in Boston. The protest lasted one minute for each transgender person murdered in the United States. In November, the Human Rights Campaign reported that at least 21 transgender people had been murdered in 2015 (http://goo.gl/wRHfF7).

“The forum was not a response to the protest from last year, the forum was a continuation of efforts that we have been working on for quite some time now,” Boston Pride President Sylvain Bruni told The Rainbow Times prior to forum. “We decided to focus on intersectionality because we felt there was a lack of public, open, constructive discussion on the topic …”

Though Torres did acknowledge that “there’s more to do,” he did not discuss concrete responses to the demands of the #WickedPissed protesters.

Daunasia Yancey, founder and lead organizer of Black Lives Matter Boston, which helped coordinate the #WickedPissed protest, said that BLM was nominated to be a Grand Marshal in this year’s Pride parade, but requested a meeting with the Boston Pride committee to discuss their concerns.

“We felt that there were no concrete responses to the demands that were made, so we did not move forward with accepting the nomination,” said Yancey of the meeting.

When questioned by The Rainbow Times about concerns audience members had about collective actions after the forum, the Boston Pride committee provided the following response:

“We always intended the event to be a catalyst for discussion and we hope that the community will continue the discussions around these important issues. Boston Pride will convene with community stakeholders to determine appropriate next steps and potential future events or initiatives.”

“It’s encouraging to see Boston Pride’s new attempts to incorporate the intersectionality of diverse queer peoples and our issues into the annual Pride celebration,” said Ben Power Alwin, curator of the Sexual Minorities Archives, based out of Holyoke, Massachusetts.

During the question and answer portion of the program, Councilor Pressley committed to starting a policy working group to help address issues affecting transgender people.

“I am working with the organizers of the forum and my staff offline to create a meeting space where this kind of intentional organizing and planning can occur,” said Councilor Pressley.

The forum was part of a series of other activities Boston Pride coordinated, including a screening and panel discussion of the documentaries “Same Difference,” which highlights tensions within the lesbian community over race and gender identity, and “Transforme,” an examination of the lives of four transgender youth; and sponsoring the Lesbians of Color Symposium (LOCS).