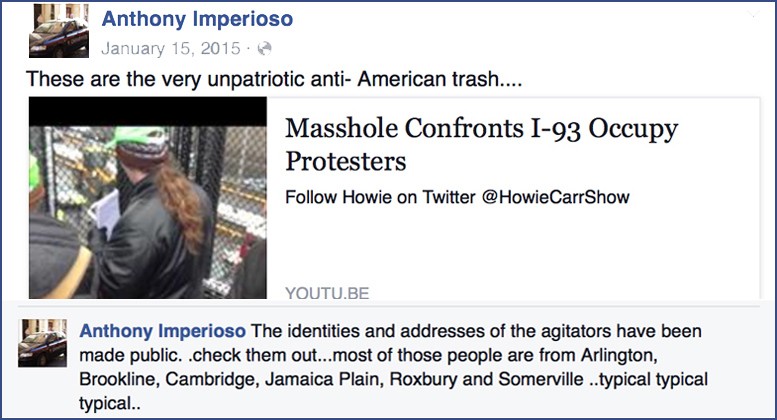 After inflammatory Facebook comments made by Officer Anthony Imperioso, G.O.A.L. President, which still remain on his FB page, Boston Pride has withdrawn his nomination as a Pride Marshal. Additional screenshots of the comments can be found at the bottom of the page. Photo: Facebook

More Updates at the end of the story

“It has come to our attention that Mr. Anthony Imperioso, who was elected a marshal by the community for the 2016 Pride Parade, has made some offensive comments on his Facebook page,” read a statement by the Boston Pride committee posted on its Facebook page and e-mailed to The Rainbow Times. “After a discussion between Mr. Imperioso and Boston Pride, his marshalship has been withdrawn, and Mr. Imperioso will not be a marshal in the 2016 parade.”

Over the weekend, The Rainbow Times learned that Officer Imperioso had made several racialized Facebook comments regarding Black Lives Matter demonstrators who shut down a portion of Interstate 93 on January 15, 2015.

At nearly four minutes in length, the video features an unknown man questioning Black Lives Matter demonstrators on a bridge purportedly in East Milton Square on January 15, 2015. On that day, 29 demonstrators were arrested for blocking traffic on I-93 north of Boston in Medford and south of Boston in Milton. The demonstrators, who in some instances formed human barricades in the middle of rush-hour traffic, were protesting a recent spate of shootings by police officers of unarmed black men across the country.

Stating that the protesters had a “ … left-wing Marxist agenda,” Officer Imperioso referred to Caucasian protesters as “white trash” and went on to refer to the demonstrators as “agitators.”

“Maybe we patriotic Americans should start protesting welfare offices and blocking those entrances then these lazy illiterates will go away,” said Officer Imperioso in a public Facebook post sometime after his initial post on the demonstration.

When a Facebook commenter suggested that someone should set up protests outside of the demonstrators’ homes, Officer Imperioso responded, “Homes??? You mean public housing I pay for.”

“It’s a very common response, that when people protest and stand up for their rights and what they believe in and for underrepresented communities, especially when it’s against the government or the state, that people automatically want to dismiss them as agitators,” said Daunasia Yancey, the lead organizer for Black Lives Matter Boston.

“Anthony Imperioso…has taken to Facebook to make inappropriate, offensive, and bigoted statements about Black Lives Matters protestors, Muslims, and people on welfare. This is unacceptable,” read the petition, which also states that honoring any police officer at a Pride event is, “ … an affront to the many LGBTQ people, particularly people of color, poor people, transgender people, and homeless people, who continue to be targets of police violence.”

“I am glad that Boston Pride has withdrawn Anthony Imperioso as a [parade] marshal, though there is still much work to be done,” said the petition’s author, Reverend Jason Lydon, who is the national director of Black and Pink, a nonprofit that advocates for incarcerated LGBTQ people. “Given the history of Stonewall and the continued violence by police against communities of color, especially Black communities, Boston Pride should never have moved forward with a police officer nomination in the first place. Mr. Imperioso’s racist, classist, Islamophobic, and anti-refugee public statements are indicative of a police culture that is rooted in oppression and violence.”

In less than 24 hours, Reverend Lydon’s petition had gone viral and Facebook was filled with angry comments from members of the LGBTQ community about Officer Imperioso’s marshalship. According to Reverend Lydon, more than 200 signatures were collected prior to Boston Pride’s announcement.

Boston Pride did not respond to The Rainbow Times request for an interview on the comments that were made on social media, its specific vetting process for marshals, and its nomination protocols. Instead, they published the release below on their website to explain the situation.

“As an inclusive organization, Boston Pride does not condone any language that is intolerant of racial, ethnic, or religious differences. Additionally, we reject language that promotes violence towards any individuals who are exercising their First Amendment rights. It has come to our attention that Mr. Anthony Imperioso, who was elected a marshal by the community for the 2016 Pride Parade, has made some offensive comments on his Facebook page. Boston Pride cannot condone those comments. After a discussion between Mr. Imperioso and Boston Pride, his marshalship has been withdrawn, and Mr. Imperioso will not be a marshal in the 2016 parade. 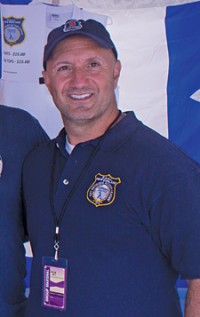 As of Monday at 5:00 p.m., Officer Imperioso’s Facebook page appears to have been deactivated. Attempts to reach Officer Imperioso prior to the story breaking were unsuccessful. The Boston Globe contacted Woburn Police Chief Robert Ferullo who told them that “he did not know enough about the allegations to comment at this time, but that his department is ‘looking into it.'”

As of 8 p.m., the New England G.O.A.L. organization’s Facebook page appears to have been deactivated as well.

[Check back for updates as this story continues to unfold.]

Petition: Don't let a cop be a marshal at @bostonpride https://t.co/qnfjoxl7pL 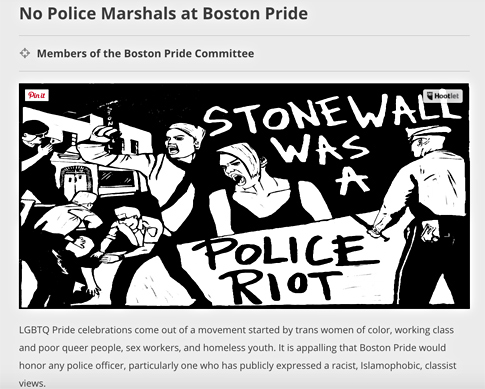 Petition started by Black and Pink around 8 p.m. last night