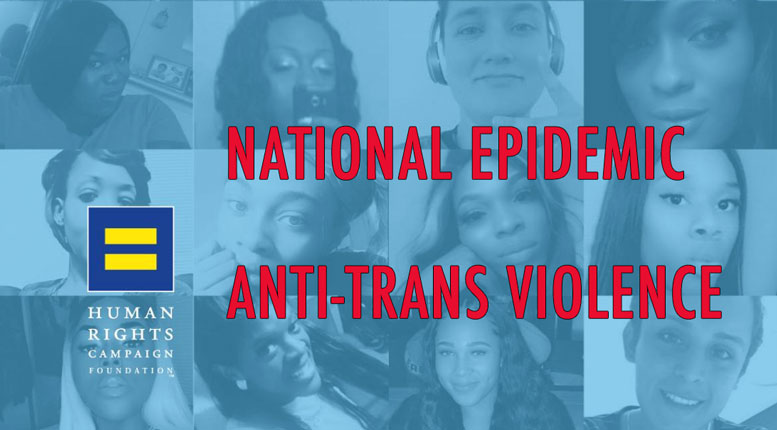 Epidemic takes the lives of trans and GNC people, some go uncounted too

Submitted by the Human Rights Campaign—

HRC Foundation released A National Epidemic: Fatal Anti-Transgender Violence in the United States in 2019, a distressing report honoring the at least 22 transgender people and gender non-conforming people killed in 2019 and detailing the contributing factors that lead to this tragic violence. The report comes two days ahead of Transgender Day of Remembrance, which, this year, marks the 20th annual commemoration of transgender people killed during the preceding year.

“Transgender women of color are living in crisis, especially Black transgender women,” said HRC President Alphonso David. “While the details of the cases documented in this report differ, the toxic intersection of racism, sexism, transphobia and easy access to guns conspire to deny so many members of the transgender and gender non-conforming community access to housing, employment, and other necessities to survive and thrive. Every one of these lives cut tragically short reinforces the urgent need for action on all fronts to end this epidemic — from lawmakers and law enforcement to the media and our communities.”

A National Epidemic: Fatal Anti-Transgender Violence in the United States in 2019 explores many of the factors that can contribute to or facilitate fatal violence. In many instances, systemic discrimination at the intersection of gender identity and race lead to significant barriers to employment and housing. This pushes many transgender and gender non-conforming people into underground economies, including sex work, to survive and into circumstances where they may be more likely to encounter violence.

The report also calls for the expansion of community-based resources and programs to address the epidemic. Earlier this year, HRC announced it is significantly expanding its work dedicated to justice for the transgender community. The organization will advance new initiatives working alongside community advocates to focus on economic empowerment; capacity-building programs; targeted task forces in communities hardest hit by the epidemic of anti-trans violence; and expanded public education campaigns.

There are a number of actions outlined in the report that lawmakers can take to address the violence, including passing non-discrimination protections; enhancing law enforcement response and training; improving data collection and reporting; reforming laws that have the impact of criminalizing marginalized communities and undermining public health, and adopting common-sense gun violence protections.

In addition to the 22 transgender and gender non-conforming people killed by fatal violence, the report also profiles two other cases of transgender women, Johana ‘Joa’ Medina and Layleen Polanco, whose deaths remain under investigation. Both were likely impacted by circumstances fostered by hate, indifference, and dehumanization. Medina, 25, died at a hospital in El Paso, Texas, just hours after being released from ICE custody. She suffered severe health complications that went untreated while she was in detention, according to Diversidad Sin Fronteras. Her family filed a wrongful death and personal injury claim against ICE and the Department of Homeland Security. Polanco, 27, was found dead in solitary confinement at Rikers Island on June 7. Her family says authorities knew she had epilepsy and failed to provide her proper treatment despite her condition.

The report comes just days after the Federal Bureau of Investigation released 2018’s hate crimes data, which found an alarming 34 percent increase in violent hate-based attacks on transgender people between 2017 and 2018.

Last week, HRC commemorated the annual Transgender Awareness Week, which is dedicated to illuminating both the progress and unfinished work in the fight for transgender equality. Throughout the week, HRC featured several transgender activists on the frontlines of change across the country, including Kiara St. James and Marissa Miller. On Wednesday, transgender people and their allies will gather in communities across the country to mark Transgender Day of Remembrance.