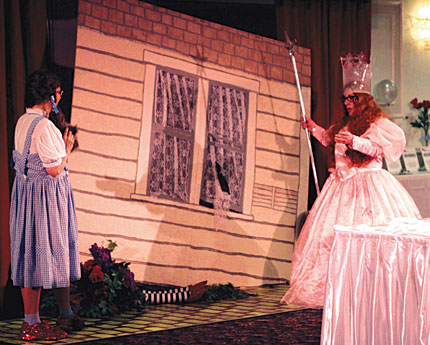 By: Brook Rosini/Special to The Rainbow Times—

NEW HAVEN, Conn.— The Dorothy Awards is an annual fundraiser for the New Haven Pride Center (NHPC) and also acts as an opportunity for the organization to raise visibility of people and organizations working in the LGBT community.

“Mix in the Dorothy and Wizard of Oz theming, which offers all sorts of inspirational and community-connected imagery, and it tends to lead to a great night out,” said NHPC Co-President Joshua O’Connell.

“While it’d be interesting to honor a national figure, we’ve resisted that to date because there are a lot of unsung heroes within the state that deserve recognition,” O’Connell said.

O’Connell cited the event’s recognition in many of the state’s largest media outlets as an important way The Dorothy Awards raises awareness about organizations and individuals working for the LGBT community in Connecticut. He said the goal of The Dorothy Awards is to create a ripple effect.

“Our hope is it helps to further spread the word and ultimately lead to bigger and better things happening,” said O’Connell.

Recipients of The Dorothy Awards undergo a rigorous vetting process. First, nominees are suggested through an open nomination process for about six to eight weeks each summer, after which the NHPC’s board of directors adds to the list. In July, the board gathers at an annual retreat to determine the final list of honorees.

This year’s honorees include Betty Gallo, a lobbyist in Hartford who has been working for social and civil rights issues in Connecticut for more than 30 years; Christine O’Leary, a comedian who has dedicated her talent to help raise funds for a variety of organizations; Joe Mannetti, a fundraiser who supports many Connecticut organizations, especially those focused on youth issues, HIV/AIDS education and support, and transgender issues; and AIDS Project New Haven, an organization celebrating 30 years of serving the Greater New Haven community supporting individuals and families affected by HIV/AIDS.

“We of course can’t honor everyone each year, so we inevitably carry nominations over from year to year to ensure great people aren’t forgotten as we move along,” O’Connell explained. “The last few years in particular, at least one of our honorees had been brought to our attention a year or two before we ultimately got to honor them.”

One such example is honoree Joe Mannetti. A transplant to Connecticut, Mannetti has made a name for himself as a highly successful fundraiser for the state’s LGBT organizations, according to O’Connell. Professionally, Mannetti has been an HIV testing counselor as well as a mental health counselor working with LGBT people. He currently works as an HIV testing outreach specialist at AIDS Project New Haven.

Mannetti said his volunteer work “gives my life a sense of purpose and direction.” He described his volunteerism as having included hosting fundraising events to support organizations that provide services to people in the LGBT community, giving presentations at public speaking engagements that address issues faced by many LGBT people, and publishing articles on LGBT issues. [pullquote]“If it wasn’t for all those transgender people, drag queens, leather folk, and LGBT people of color who made so much noise in the streets about HIV/AIDS and their right to dare to be different without being oppressed, I wouldn’t be here talking with you.”— Joe Mannetti[/pullquote]

“He not only wasted no time getting to work helping the state’s organizations to raise funds once he got here, but he has only ramped up his efforts as the years have gone on,” O’Connell said. “His leadership is noteworthy: from bringing people together to help raise the visibility of key nonprofits in our state, to supporting organizations with important fundraising efforts, and now in the case of AIDS Project New Haven, helping them carry out their important mission.”

In Connecticut, Mannetti has hosted fundraising events for AIDS Project New Haven and True Colors, and has volunteered at The Northeast Ursamen, The Imperial Sovereign Court of All Connecticut, and Connecticut Leather, among others. Mannetti said he has placed his primary focus on grassroots outreach that raises awareness and funds for support services that help LGBTQ youth, transgender people, and people infected and affected by HIV/AIDS. When asked about his focus on grassroots methods, Mannetti cited the legacy of LGBT activism.

“I think doing outreach on a grass-roots level is important because, historically, that is really how LGBT awareness and activism began,” said Mannetti. “If it wasn’t for all those transgender people, drag queens, leather folk, and LGBT people of color who made so much noise in the streets about HIV/AIDS and their right to dare to be different without being oppressed, I wouldn’t be here talking with you.”

Mannetti said he began volunteering when he was living in Los Angeles, while he was pursuing an acting career.

“I was working at a lot of jobs that were strictly just a means of paying my bills in between auditions. I felt very unfulfilled by the work I was doing at the time, and I wanted to do something that would allow me to give back to my communities.”

Eventually, he said he was encouraged by friends he made through volunteering to enter local “Bear” contests, and after winning a couple of titles, decided to use the publicity he received as a title-holder to direct the attention he was getting toward raising awareness about LGBT issues. Mannetti said he believes the value of organizations like the NHPC is immeasurable.

“[NHCP] provides support, resources, and referrals to LGBT people without judgment in an area that is one of the most vibrant with diversity and with a real feeling of LGBT pride,” Mannetti said. “I think that the New Haven Pride Center reflects and nurtures that sense of community support that is so much of what I have experienced in [New Haven]. It is all about people, volunteers, grassroots outreach, and genuine caring for one another in a very positive way.”

When asked what it means to him to have been selected to receive a Dorothy Award, Mannetti stated, “This award is about the power of collective grassroots work with others. It’s not about me. It’s about what I was able to do thanks to a lot of fine people who helped me to be a better person.”

The 2014 Dorothy Awards will take place Saturday, March 1, 2014 from 6 p.m. to 11p.m. at Fantasia in North Haven. To learn more about the New Haven Pride Center, visit www.newhavenpridecenter.org. For more information on The Dorothy Awards or to purchase tickets, visit www.dorothyawards.org.