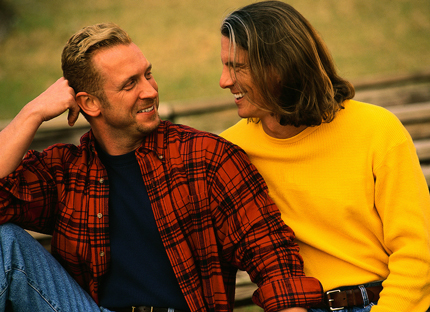 WASHINGTON, D.C., — With the presidential election a mere two months away, the stakes are high for the estimated nine million lesbian, gay, bisexual and transgender (LGBT) Americans whose daily lives are limited by a lack of federal protections. According to a new publication released today, most LGBT Americans live in a two-tier system where they must navigate conflicting state laws with the federal government’s refusal to offer the most basic securities, such as employment non-discrimination and anti-bullying protections.

An Ally’s Guide to Issues Facing LGBT Americans is a primer introducing the major areas in which unfair laws and stigma create extra burdens for LGBT Americans. The resource was developed by the Human Rights Campaign (HRC), Log Cabin Republicans, the Movement Advancement Project (MAP), Stonewall Democrats and the Victory Fund.

“LGBT Americans want and deserve the same chance as everyone else to pursue health and happiness, earn a living, be safe in their communities, and take care of their loved ones,” said HRC President Chad Griffin. “Unfortunately, unfair laws, lack of legal protections, and outdated prejudices stand in the way of these bedrock American values. We must work to change the hearts and minds of our fellow Americans, guiding them to fairness and equality.”

The past three years have brought historic gains: openly gay and lesbian servicemembers now are able to serve their country; LGBT people are included in the federal hate crimes law; and more states are passing or expanding laws which aim to protect LGBT individuals from bullying in schools and discrimination in housing and employment. However, as detailed in An Ally’s Guide to Issues Facing LGBT Americans details, LGBT Americans are simply still not equal under federal law.

Many LGBT people experience discrimination when just going about their daily activities–whether eating at a restaurant with their families or friends, trying to obtain safe, clean housing or applying for a loan. Contrary to popular belief, federal legislation does not protect LGBT people from discrimination in housing, public accommodations, credit or employment. LGBT people also lack such protections in most states. LGBT workers often cannot extend their health insurance coverage to their partners or children. Without family and marriage tax deductions, LGBT families pay additional taxes but have access to fewer benefits like Social Security Survivor Benefits. Due to these and myriad other inequalities, LGBT people are more likely to live in poverty and suffer from health disparities.

“With all of the media and political attention on marriage, very few Americans understand the full extent of the inequality LGBT Americans face every day,” said Jerame Davis, Executive Director of National Stonewall Democrats. “Kids in foster care are denied loving and qualified parents for no other reason than because those parents are gay or lesbian. Older LGBT Americans live in poverty because they’re denied access to Social Security Survivor Benefits. This resource highlights all of these issues and more in an accessible and easy to read manner.”

“LGBT or straight, Republicans are united in the belief that strong families are critical to a free society, and that equal opportunity is essential to the American dream. This report will be a valuable tool to persuade Americans of all political stripes of the need for equal protection for all families, including gay and lesbian service members and veterans, said Log Cabin Republicans Executive Director, R. Clarke Cooper.

“LGBT Americans want to serve their country as civic leaders, elected officials, members of the military and volunteers.  We’re doing so in greater numbers than ever before, but there is still a glass ceiling of prejudice that keeps us from reaching our full potential,” said Denis Dison, vice president of communications for the Gay & Lesbian Victory Fund and Institute. “The U.S. has never had an openly LGBT member of the president’s Cabinet, nor an out U.S. Senator. There are no openly gay governors, and more than a dozen states still have no openly LGBT state legislators.  We’re working to level the playing field for LGBT Americans who want to serve their communities.”

The Human Rights Campaign is America’s largest civil rights organization working to achieve lesbian, gay, bisexual and transgender equality. By inspiring and engaging all Americans, HRC strives to end discrimination against LGBT citizens and realize a nation that achieves fundamental fairness and equality for all. www.hrc.org

Founded in 2006, the Movement Advancement Project is an independent think tank that provides rigorous research, insight and analysis that help speed equality for lesbian, gay, bisexual and transgender people. Learn more at www.lgbtmap.org

National Stonewall Democrats is the national voice of lesbian, gay, bisexual, transgender and allied Democrats, with more than 80 local affiliates across the nation. Stonewall Democrats works to elect more pro-equality Democrats regardless of their sexual orientation or gender identity—and to improve the Democratic Party on issues important to LGBT Democrats.www.stonewalldemocrats.org

The Gay & Lesbian Victory Fund and Institute works to train and support openly lesbian, gay, bisexual and transgender leaders who go on to serve their communities as elected and appointed officials.  More than 525 openly LGBT elected officials are currently serving in the U.S., up from less than 50 when Victory was founded in 1991.  For more information, visit www.victoryfund.or