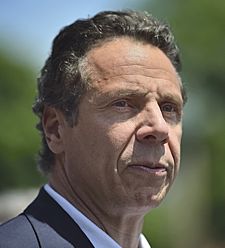 The first report of AIDS occurred 33 years ago on Thursday, July 3, 1981, with some of the first AIDS cases occurring in New York. The momentum to bring the HIV/AIDS epidemic to a close already exists in New York State. New York has eliminated HIV transmission via blood products; virtually ended mother to child HIV transmission; and decreased new HIV diagnoses due to injection drug use by 96% since the mid-1990s.

While the nation as a whole has seen no decrease in the number of HIV diagnoses, over the last decade, New York State has achieved a 40 percent reduction in new HIV cases and significant decreases in HIV incidence across all categories of race, ethnicity, gender, age, and risk. Although the number of new HIV infections has been declining for a number of years, the total number of New Yorkers living with HIV/AIDS has continued to increase. This is because people with HIV can now live a normal life span and the number of HIV/AIDS deaths is also decreasing.

“Bending the Curve” will precipitate a dramatic downward trend in new HIV infections beyond the current trend. Though this effort will result in increased HIV medication expenses, it is well worth the investment given the human cost, and over time the initiative will pay for itself. Each averted HIV infection saves almost $400,000 in lifetime medical costs, and by 2020, “Bending the Curve” will save the State an additional $317 million and prevent more than 3,400 new cases of HIV. [pullquote]While the nation as a whole has seen no decrease in the number of HIV diagnoses, over the last decade, New York State has achieved a 40 percent reduction in new HIV cases and significant decreases in HIV incidence across all categories of race, ethnicity, gender, age, and risk.[/pullquote]

This plan would not have been possible without the support of our legislative leaders, and several key policies in support of “Bending the Curve” have already been enacted this year in the budget, including:

Additionally, the New York State Department of Health Medicaid Program has successfully negotiated supplemental rebates with the three pharmaceutical companies representing 70% of the HIV market, AbbVie, Bristol-Myers Squibb, and Gilead; this agreement will further decrease the costs to the state for ensuring all HIV-infected persons are on appropriate medications. Additional pharmaceutical companies may join the agreement.

Housing Works CEO Charles King said, “This step by Governor Cuomo, setting a clear goal to end the AIDS crisis in New York State, is absolutely courageous. In doing so, the Governor is reshaping the way we think about the AIDS epidemic and is setting a new standard for leaders of other jurisdictions in the United States and, indeed, around the world.”

New York City Human Resources Administration Chief Special Services Officer Dan Tietz said, “On this LGBT Pride Day, I greatly applaud Governor Cuomo for boldly leading in our three decade long fight to end the AIDS epidemic. We have the science and means to bring HIV infections below epidemic levels and with the Governor’s and Mayor Bill de Blasio’s smart leadership, we can end AIDS in New York by 2020. HRA is now implementing the 30% rent cap, agreed to by the Mayor and Governor in February, which is another part of this effort to save lives and money. Today’s game-changing action will push other leaders in the U.S. and beyond to take the necessary steps to end the HIV/AIDS epidemic for all.”

Harlem United CEO Steven C. Bussey said, “While we are heartened by the progress we have made in confronting the AIDS epidemic in New York State, we know that we still face an epidemic of crisis proportions for many communities. Governor Cuomo’s announcement to create a plan to end AIDS demonstrates the leadership and political will needed to end the epidemic as we know it in New York State.”

Treatment Action Group Executive Director Mark Harrington said, “The goal is ambitious, but grounded in reality. NYS has always been a leader and center of innovation in the fight against HIV/AIDS. We have seen an almost 40% decrease in new HIV diagnoses in the last decade, with fewer new infections each year, while nationally there has been no decline in the number of new HIV infections diagnosed each year. With continued implementation of the Affordable Care Act and the State’s successful Medicaid reform, we’ve gained the momentum necessary to put more people living with, and at risk for, HIV into primary care and the support services necessary to achieve success.”

Gay Men’s Health Crisis CEO Kelsey Louie said, “We applaud the Governor for his decisive leadership and commitment to end AIDS as an epidemic on this 45th anniversary of the Stonewall Riots, a rallying cry to fight back against social injustice. The plan to end AIDS can hopefully result in a dramatic decrease in new infections among MSMs and transgender women, especially within the low income communities of color, some of our hardest hit populations.”

Acting Executive Director of AIDS Community Research Initiative of America Benjamin Bashein said, “ACRIA applauds Governor Cuomo for his bold plan to end AIDS in New York State. We now have the knowledge and the means to dramatically reduce new infections and promote optimal health for those with HIV. Governors Cuomo’s leadership will make New York a model for ending AIDS across the country and around the globe.”

1 Comment on "New York Gov. Cuomo Plans to “End AIDS” in the State"